Groundwater levels in a metropolitan area like Berlin are subject not only to natural factors such as precipitation, evaporation and subterranean outflows, but are also strongly influenced by such human factors as development, sealing of surface, drainage plants, withdrawals and recharge.

In Berlin, there are two groundwater layers. The deeper layer carries salt water and is largely separated from the upper groundwater layer by an approx. 80 m thick layer of clay, except at occasional fault points in the clay. The upper layer carries fresh water and has an average thickness of 150 m. It is the source of Berlin’s drinking (potable) and process (non-potable) water supplies. It consists of a variable combination of permeable and cohesive loose sediments. Sand and gravel (permeable soils) combine to form the groundwater aquifer, while the clay, silt and organic silt (cohesive soils) constitute a groundwater-obstructing layer. 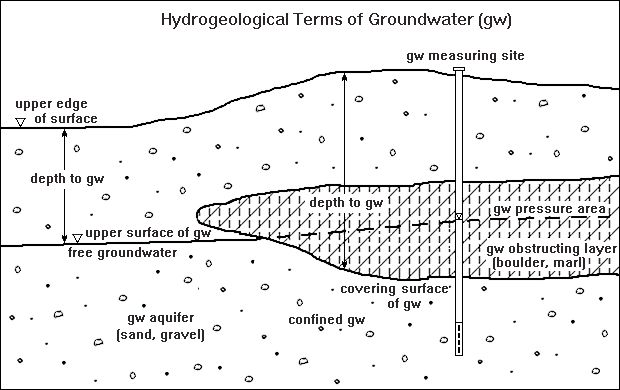 Fig. 1: Terminological Definition of the depth to groundwater at free and unconfined groundwater
Image: Umweltatlas Berlin

The Map of Depth to Groundwater gives an overview of the spatial distribution of areas with the same depth classifications, at scale of 1 : 50,000 (SenStadt 2003). It was calculated on basis of the data of May 2002, and applies to the respective near-surface aquifer with an uninterrupted water supply. In Berlin, this in most cases means the main groundwater aquifer (GWL), which is used for water supply (GWL 2, according to the structure of Limberg and Thierbach 2002), and which is uncovered in the glacial spillway, but covered in the more elevated areas. In exceptional cases, the GWL 1 (e.g. in the area of the Panke valley) or the GWL 4 (tertiary formations) were used to determine the groundwater depth.

Areas with a lesser depth to groundwater (to about 4 m) are of particular importance. Pollution of soils can quickly lead to deterioration of groundwater in these areas, depending on the nature of the mantle (permeable or non-permeable) above the groundwater. The Map of Depth to Groundwater is thus a significant basis for the preparation of the Map of the Protective Function of Groundwater Coverage (cf. Map 02.06). The spatial overlaying of groundwater depth onto geological characteristics of the covering mantle permits the delimitation of areas of varying protective functions of groundwater coverage). 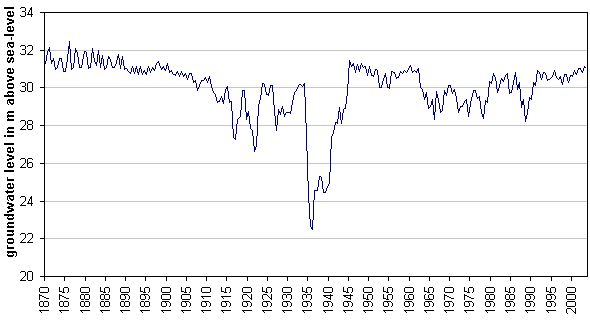 During the ensuing period, from the early ‘50’s to the early ‘80’s, the groundwater level sank continually and over large areas because of increased withdrawal. This was particularly noticeable in water production areas (waterworks facilities). The lowering was caused by the general rise in water consumption by private households, and by construction (rebuilding of the severely destroyed city, subway construction, and large-scale construction projects). The expansion of water production facilities in the West Berlin waterworks was completed by the beginning of the ‘70’s. The expansion of the Friedrichshagen Waterworks in East Berlin began in the mid-‘70’s, to supply water to the new residential areas in Hellersdorf, Marzahn and Hohenschönhausen.

A slight rise in groundwater levels has occurred in West Berlin since the end of the 70’s.

Following the political changes in 1989 (fall of the Berlin Wall), the level of water consumption in the eastern boroughs of Berlin was drastically reduced, and the production at the waterworks in those areas dropped an estimated 50 %. This resulted in a rise in the groundwater level throughout the city, east and west. Since then, it has kept relatively steady at this high level; a further increase has not been observed, however (cf. p. & Ch. Basic Data).

Those areas nearest to waterworks recorded level increases of as high as 3 m during the mid-‘90s. The Berlin Pleistocene Watercourse (or glacial spillway), which covers half the area of the city, has a very low depth to groundwater of only a few meters. Many of the cellars in some areas were not sealed appropriately, and therefore suffered damage through dampness due to a sudden increase in groundwater during this period. In two areas, the damage was so extensive that it was necessary to implement groundwater regulatory measures (Rudow, Kaulsdorf).

Permanent, wide and deep cones of depression have formed in water catchment areas around waterworks wells. The considerable differences observable among groundwater levels are directly related to variations in withdrawal requirements at the respective waterworks. Riemeister Lake and Nikolas Lake were dried out by the water withdrawals of the Beelitzhof Waterworks at the beginning of this century. The groundwater level of the Schlachten Lake fell by 2 m, and at Krumme Lanke by 1 m. Since 1913, water from the Havel has been withdrawn into the Grunewald lakes (inversion of natural flow) to balance this loss. The wetlands of Hundekehlefenn, Langes Luch and Riemeisterfenn, as well as the shore areas of the lakes have been saved by this measure.

The cones of depression around well galleries at the Havel Lake have effects deep into the Grunewald (forest). The groundwater level at Postfenn sank by 3.5 m between 1954 and 1974, and at Pechsee in the Grunewald by about 4.5 m between 1955 and 1975. Well gallery withdrawals at banks of the Havel have caused severe drying out of root soils of plants in the direct vicinity of the Havel.

Some wetland areas were flooded and given seepage of surface water to moderate negative effects caused by the lowering of groundwater levels. These were the West Berlin nature reserves Grosser Rohrpfuhl and Teufelsbruch in the Spandau Forest, and Bars Lake in Grunewald; in East Berlin, Krumme Laake in Grünau and Schildow in Pankow. 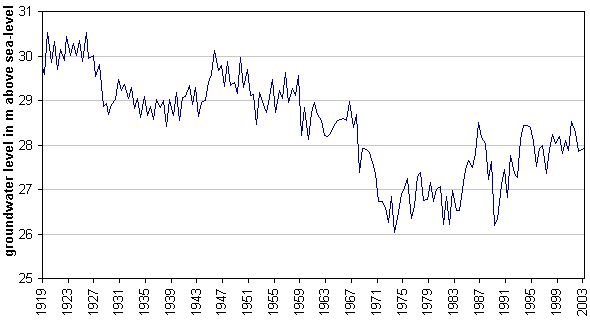 However, in May 2002, the groundwater surface was, all in all, at a relatively high level, as it had been during the previous seven years. The reason for this was declining water consumption, which can be seen from the reduced raw water intake by the Berlin Water Utility. Five small Berlin waterworks discontinued their production completely during the period between 1991 and 1997: Altglienicke, Friedrichsfelde, Köpenick, Riemeisterfenn and Buch. In addition, drinking water production at the two waterworks Johannisthal and Jungfernheide was discontinued temporarily in September 2001; at the latter, the same was true for artificial groundwater amplification. In the context of SenStadtUm groundwater management, groundwater is, however still withdrawn at both locations, so as not to endanger current local waste disposal and construction measures. The overall intake of the waterworks for drinking water purposes has dropped by over 40% in Berlin during the past 13 years: In 1989, 378 million m3 were withdrawn, as opposed to 220 million m3 in 2001. The drop in groundwater intake by the Utility in the eastern boroughs was even considerably higher – at 60% – during this period. The result was a city-wide groundwater level rise between 1989 and 2000, which most strongly affected the areas near the wells of the waterworks in the glacial spillway, with their deep cones of depression. 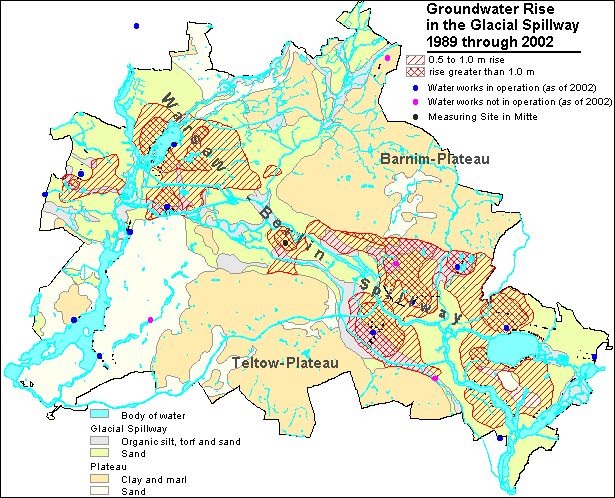 Fig. 4: Groundwater Rise during the Period 1989 through 2000.
Image: Umweltatlas Berlin

The rise shown reflects that in the observation pipes of the groundwater measurement sites, i.e., in the confined areas, the increase in groundwater pressure area, and not the actual groundwater surface. Due to the low density of data for the Barnim Plateau, the increase here could not be shown.