The accumulation of plant nutrients, especially nitrogen and phosphorus compounds, continues to be very high in Berlin waters. Linked to this excess are considerable fluctuations of oxygen amounts, caused by heightened growth or decomposition of algae.

Nutrient concentration is generally strongly dependent on water outflows. Water quality is thus fundamentally better in years of heavy precipitation than in years of low precipitation. High outflows have only a certain “diluting effect” in large cities, however, for here the entry of nutrients and pollutants rise with amounts of precipitation.

Berlin’s main body of water, the Spree, reaches the urban area relatively unpolluted. The urban Spree, its small tributaries, and the canals in Berlin are heavily to excessively polluted by industry, large sewage treatment plants and rain water inflows.

Waters directly impacted by sewage treatment plant discharges are extraordinarily heavily polluted. Particularly high levels are found in waters whose outflows are low compared to the inflow amounts, such as the rivers Neuenhagener Mühlenfliess, Wuhle, Nordgraben and Panke, and the Teltow canal. A good half of the waters influenced by sewage treatment plant outflows enter the Spree. The urban Spree and the canals dependent upon it also show high impact values.

The Teltow canal is the receiving body of water for the sewage treatment plant discharges of Wassmannsdorf, Marienfelde, Ruhleben and Stahnsdorf. The phosphate reduction measures at the treatment plants led indeed to reduced phosphate impact, but nutrient levels in the Teltow canal remain excessive, nevertheless. The high E. coli values prove a relatively high impact of fecal water.

Water quality of the Havel below the mouth of the Spree is influenced by the considerably larger outflow amounts of the Spree. Water quality protection measures undertaken in Berlin (East and West) since the middle of the 80’s include the construction of simultaneous precipitation facilities in sewage treatment plants; the operation of phosphate elimination facilities at the influx of Nordgraben into Tegeler See (see = lake); and the diversion of discharges from the sewage treatment plant Ruhleben from the Spree into the Teltow canal. These measures successfully reduced the previously excessive phosphate loads of the urban Spree and the Berlin Lower Havel. An improvement of about one value class was reached in phosphate impacts compared to the comparable outflow year of 1976 presented in the first edition of the Environmental Atlas. A further reduction is necessary, however, for the phytoplankton mass developments have not noticeably diminished. The lake-like areas of the Lower Havel used as water recreational areas are the most heavily affected of all Berlin waters by the intensive development of phytoplanktons. Measured to the eutrophication threshold of 0.01 mg/l PO4-P, the eutrophication level of the Lower Havel is still too high. 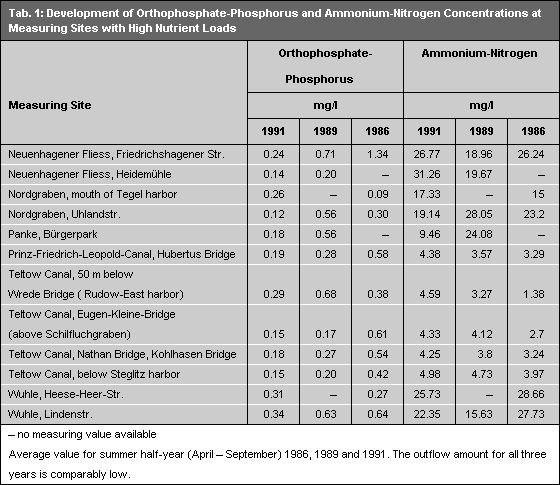 No significant improvement of ammonium impacts is recognizable for the outflow year 1991 compared to 1980, or in comparison to outflow years 1986 or 1989. The NH4-N concentrations depicted in Table 1 have maintained a continually high level for years.

The amount of discharge inflows into Berlin waters will rise because of the high amounts of sewage water to be expected in the future and the increasing amounts of discharge from sewage treatment plants in the growing Berlin metropolitan area. The disparity between natural water supplies and nutrient-rich inflow water will increase in coming years because outflow amounts of the Spree will lower as inflows of water from brown coal mining are decreased. 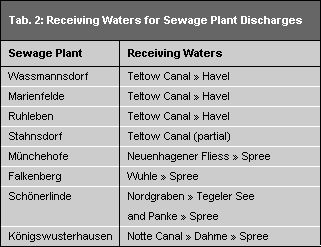 Nutrient impacts in Berlin waters are still too high. A perceptible reduction in coming years is conceivable only with: 1) rigorous application of the most modern sewage treatment plant technology (phosphate precipitation, nitrogen elimination, discharge filtration) in all sewage treatment plants in the greater Berlin area; 2) with the implementation of comprehensive restoration and extension works in sewer systems and; 3) with a stemming of inflows from the rainwater and the mixed sewage treatment systems into waters.