In the map, the degree of impervious coverage, i.e. the coverage of the earth’s surface with impermeable materials, is represented as a percentage of the reference area (statistical block or block segment). Generally, the degree of impervious coverage declines from the city centre toward the outskirts, since the building structure toward the outskirts is less dense, and the outskirts areas are either completely undeveloped (forest or farmland), or characterized by detached homes. The exceptions to this are the traditional centres of boroughs like Spandau and Köpenick, which were separate cities prior to 1920. There, the impervious coverage degree is about 60 %, and more than 90 % in their core areas. The large new development areas at the outskirts, such as Marzahn, Hellersdorf and Hohenschönhausen, or Gropiusstadt in Neukölln and the “Thermometer Estate” in Lichterfelde, are between 50 % and over 80 % impervious.

The following table shows the average degrees of impervious coverage per section type in 2011. 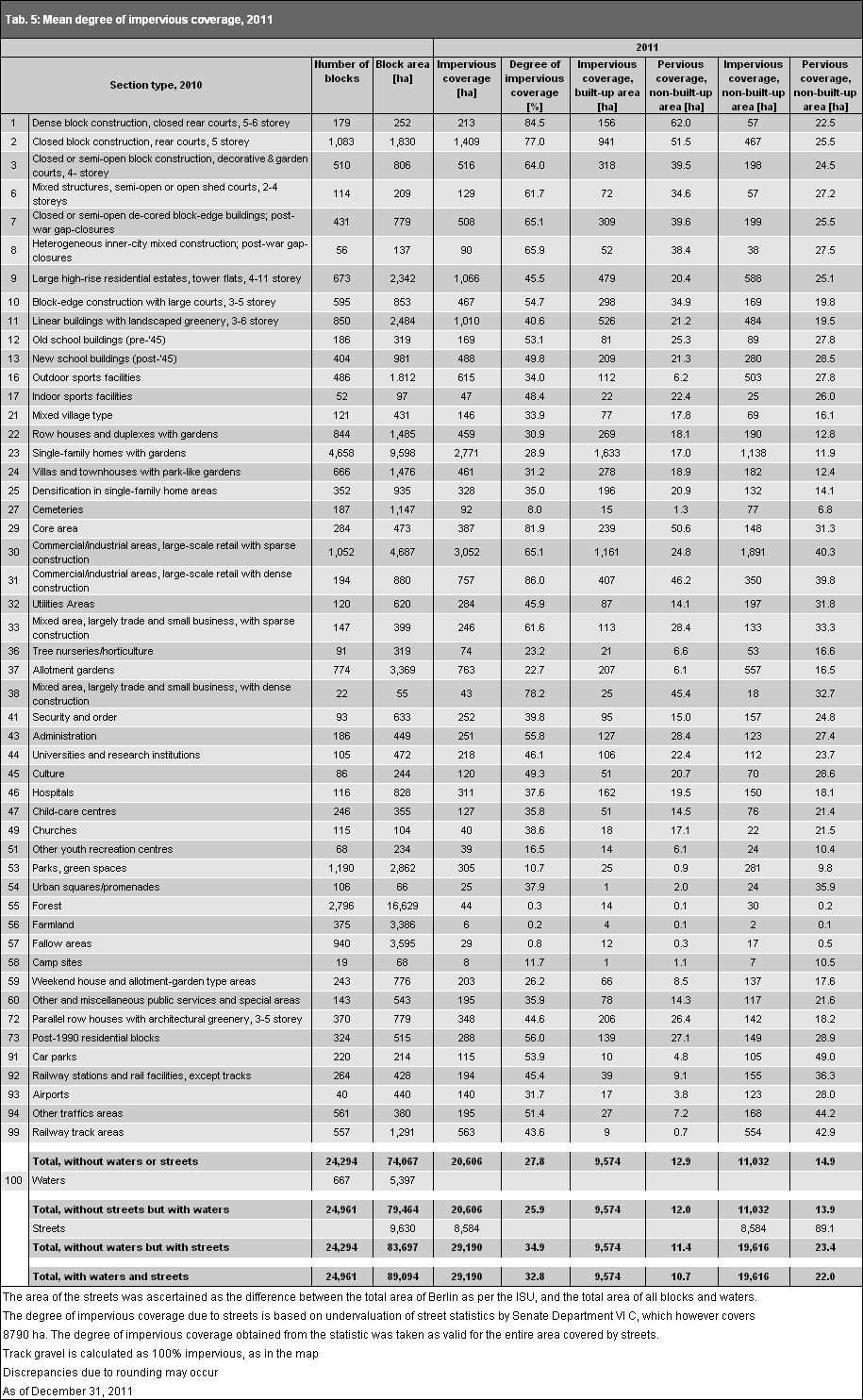 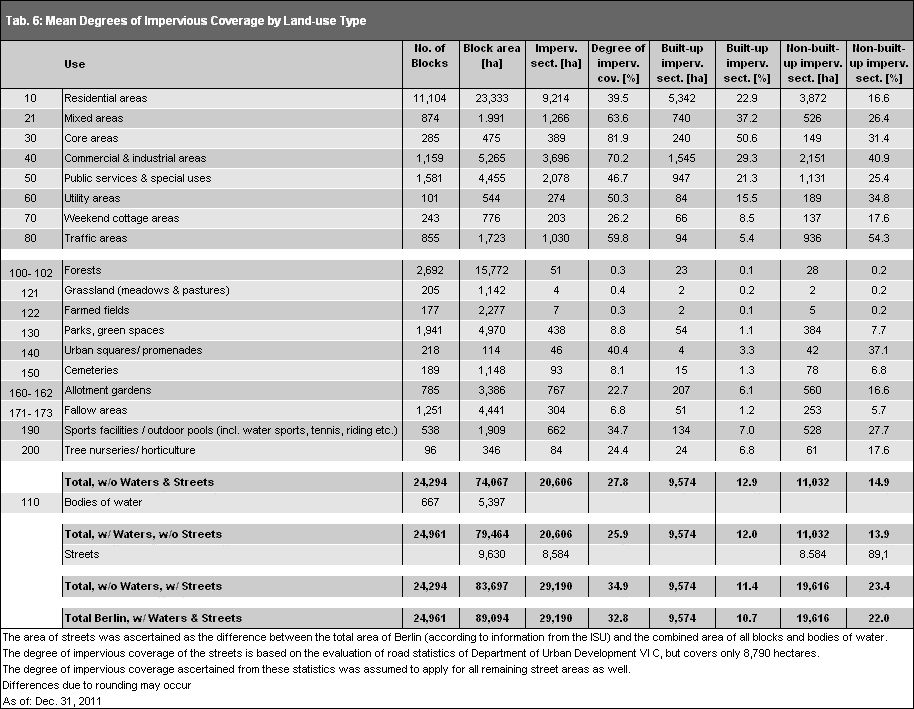 For the borough-referenced evaluation, the average degree of impervious coverage of the road surfaces was calculated. For this purpose, statistics on the pavement and road surfacing of Berlin’s streets, bicycle paths and sidewalks were evaluated (SenStadt 2006). 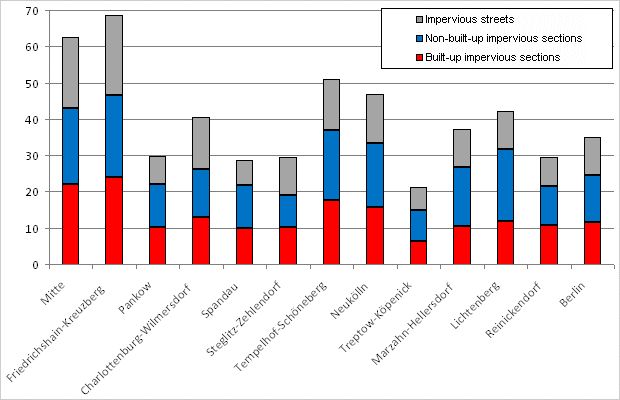 Fig. 7: Degree of Impervious Coverage by Borough (in Percentage of Total Area without Bodies of Water)
Image: Umweltatlas Berlin

The borough with the lowest degree of impervious coverage is Treptow-Köpenick, with 21.3 %, while Kreuzberg-Friedrichshain and Mitte have the highest degrees, with 68.7 and 62.7 %, respectively. These two boroughs also have the highest shares of built-up areas, as a proportion of their total areas.

Due to different ascertainment methods, a direct comparison between the impervious coverage values of 1990 or 2001 with 2005 or 2011 is possible only to a limited degree. No change in the impervious area over the course of this period of time can be ascertained from these figures.

In 2001, the degree of impervious coverage in Berlin amounted to 34.7 %, incl. streets and bodies of water. These data are to some extent based on evaluations of satellite images and other sources from the ‘80s (only in West Berlin). This mapping material was expanded to include East Berlin in 1990, and partially updated, in 2001 by means of aerial photography and topographical maps of the area. Here, use-specific flat values were assumed in some cases. Overall, the ascertainment methodology was non-uniform.

The mapping projects of 2005 in 2011 now provide a data set gain from a uniform, completely automated and considerably improved procedure. The result is that the degree of impervious coverage in 2011 amounts to 32.8 %, and is thus approx. 0.9 % higher than the value for 2005. The major share of this increase in impervious coverage is accounted for by the non-built-up impervious areas.

Tab. 7: Results of mapping of impervious coverage in Berlin, 1990 to 2011. (all information refers to the total area of Berlin, incl. streets and bodies of water). Due to changed evaluation methods, no change can be concluded for the entire period of time. The values for 1990 and 2001 are based on different evaluation methods, which do not permit any comparison with the values for 2005 and 2011. However, a comparison between 2005 in 2011 is possible.
Image: Umweltatlas Berlin

It is notable that the values ascertained for the impervious built-up area over the years are almost identical. This indicates that the old ascertainment methods yielded values that were quite good on the average, since the surveys of 2005 and 2011 using the ALK can be considered very precise.

With regard to the ascertainment of impervious roadways, the roughly estimated values available in 1990 could not be replaced by values from the Road-Building Authority until 1997. These were used for the evaluations in 2001. For the impervious coverage mapping projects in in 2005 and 2011, degrees of impervious coverage for streets, recorded by borough based on 2006 data, were obtained for the entire city (Gerstenberg & Goedecke 2011). A slight increase in the degree of impervious coverage attributable to the streets category and caused by road-building measures, primarily in East Berlin, certainly seems plausible. 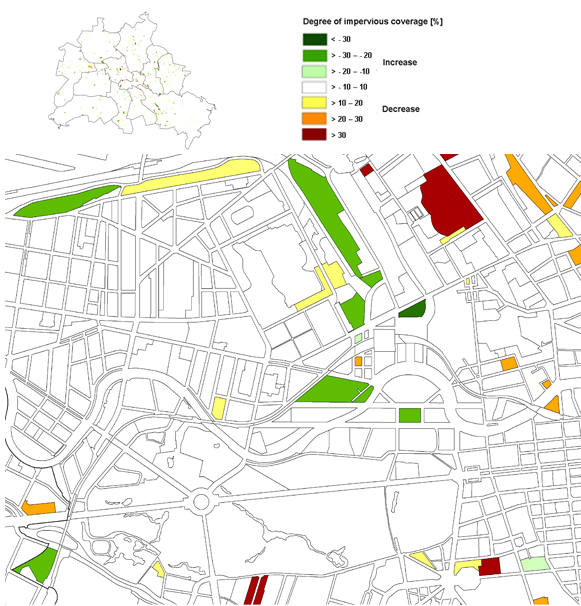 Figure 8: Map of Changes in Impervious Coverage between 2005 in 2011
Image: Umweltatlas Berlin