Traffic still represents the crucial burden factor of the urban environment. Its numerical development is observed by regular traffic investigations. Responsible for these counts on highways, national highways as well as the remaining main road network is the ministry for urban development in Berlin. The current data refer to the year 2009 and update the values of the preceding count of 2005. Based on a high comparability of the data bases and methods you can look for further explications at the map text of the edition 1995. 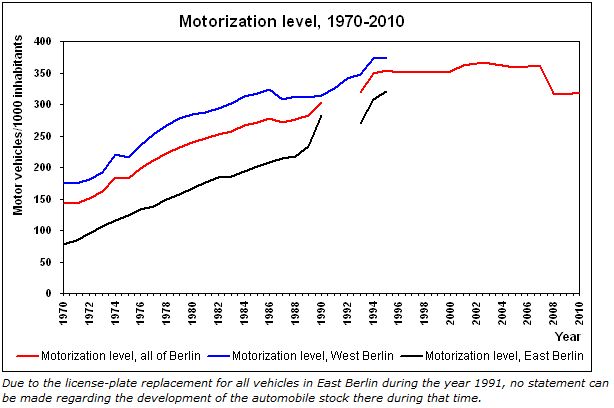 The basis for the traffic surveys carried out and analyzed by the Berlin Traffic Control (VLB) is the Main Road Network (StEP-Network) as defined in the City Development Plan for Traffic. Based on the 2009 survey, this network includes some 1,315 km.

For the purposes of air pollution control, this original network has been expanded by about 260 km (nearly 20 %), which is not based directly on the current survey figures of 2009. This expansion of total road length has led to a total length of the road network under assessment of about 1,575 km.

All additional sections are shown clearly marked as model data in the factual data display of the FIS Broker, which generates the map display.

However, compared with the survey of 2005, several new road completions also had to be considered, such as the approx. 10.5 km long segment of the A100/ A113 motorway, which, since May 2008, has provided the connection between the motorway A 100 and the Berlin Ring motorway A10. Also, a direct connection has been enabled to the future Schönefeld central airport (BBI). Another example is the opening to traffic for the road tunnel of federal highway B96 in the area of the Great Tiergarten on March 26, 2006. Through placement of the (former) Entlastungsstraße (B96) into a tunnel, the decades-long dissection of Berlin’s largest urban park was ended.
But there were also streets which were part of the subsidiary network of roads, which is not recorded in such detail, which have been “upgraded” into the main network, and are hence now counted in the current survey.

These changes in the network of roads being investigated is one reason for the rise in the share of roads with low to medium volumes in 2005, compared with previous survey times. One striking fact is the reduction of overall driving performance compared to the last survey, by almost 1.5 million km of distance, a decline which is particularly noticeable in the highest class, with more than 50,000 motor vehicles. One reason is surely the separation of lanes on the city’s motorways, which has caused segments to fall into the lower DTV classes, where an increase in driving performance has been recorded. Overall however, the reduction of total distances driven in Berlin corresponds well with the decrease in the stock of automobiles in the city, from 1,218,000 in 2005 to 1,105,000 in 2010 (see Figure 1).

The City Development Plan for Traffic (StEP), adopted on 29 March 2011 by the Berlin Senate, draws conclusions for the planning of a citywide perspective in transport policy. Its guidelines, objectives and action programmes are available online.

Even if high-emitting older cars are continually being replaced by pollutant-reduced new vehicles, which leads to a decreasing pollution emissions in spite of increased driving performance, many traffic-caused problems, such as particles from tyres (a problem unaffected by the nature of the engine), noise pollution, and the enormous consumption of land for both driving and parking traffic will remain as serious impairments for the quality of urban life in future (cf. Map 03.11 Traffic-Related Air Pollution – NO2 and PM10).