In the map, the degree of impervious coverage, i.e. the coverage of the earth’s surface with impermeable materials, is represented as a percentage of the reference area (block or block segment area). Generally, the degree of impervious coverage declines from the city centre toward the outskirts, since the building structure toward the outskirts is less dense, and the outskirts areas are either completely undeveloped (forest or farmland), or characterized by detached homes. The exceptions to this are the traditional centres of boroughs like Spandau and Köpenick, which were separate cities prior to 1920. There, the impervious coverage degree is about 60 %, and more than 90 % in their core areas. The extensive areas determined by large estates on the city outskirts, such as Marzahn, Hellersdorf and Hohenschönhausen, or Gropiusstadt in Neukölln and the “Thermometer Estate” in Lichterfelde, are between 50 % and over 80 % impervious.

In the following, Table 5 shows the average degrees of impervious coverage per area type in 2016.

The highest overall degrees of impervious coverage are shown for the area types “Dense block development, closed rear courtyard, 5-6 storey” with 85.6 %, “Core area” with 84.4 % and “Commercial and industrial area, large-scale retail, dense development” with 88.3 %. The lowest degrees of impervious coverage, with below 1 % each, are listed for the area types “Forest”, “Agriculture” and “Fallow area”. A sharp increase in impervious coverage can be observed in the area type “Rental-flat buildings of the 1990s and later”. In recent years, many of these blocks have seen a lot of subsequent densification (e.g. the Beuth-Höfe at Spittelmarkt, Havelschanze in Spandau). 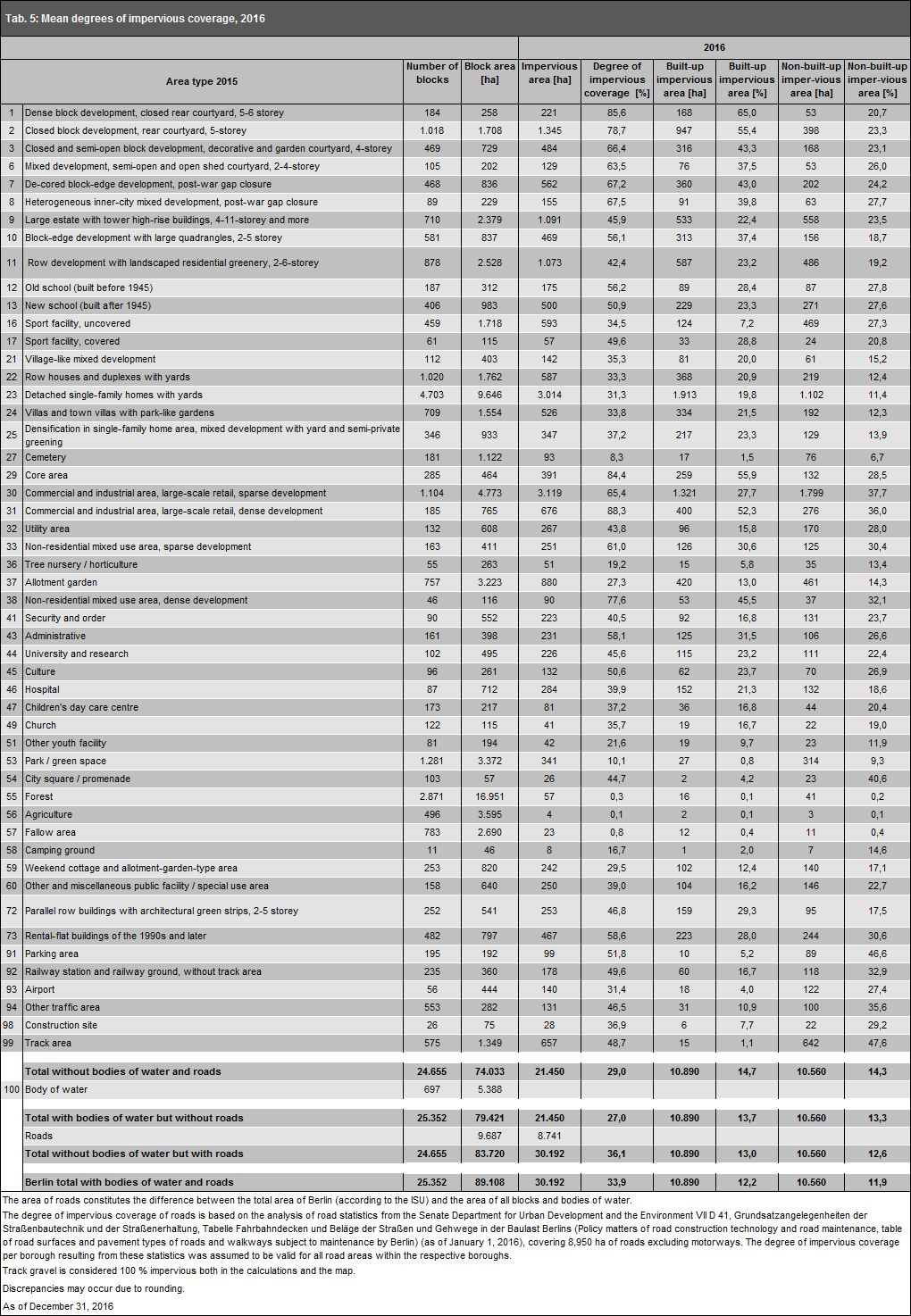 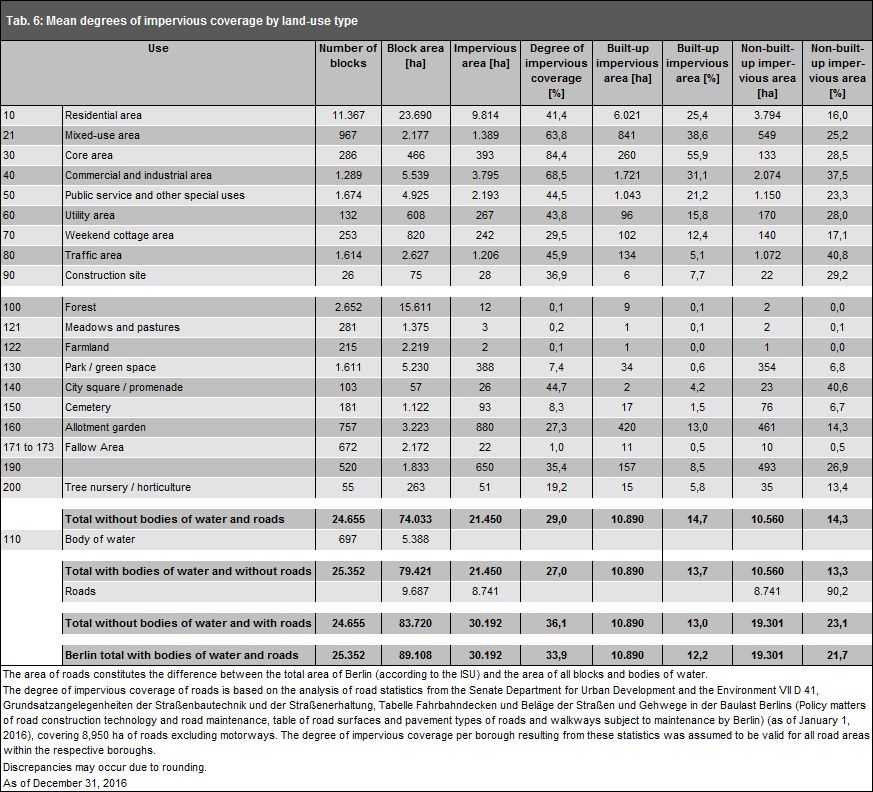 The borough with the lowest degree of impervious coverage is Treptow-Köpenick, with 22.3 %, while Kreuzberg-Friedrichshain and Mitte have the highest degrees, with 69.7 and 63.5 %, respectively. These two boroughs also have the highest shares of built-up areas, as a proportion of their total areas. 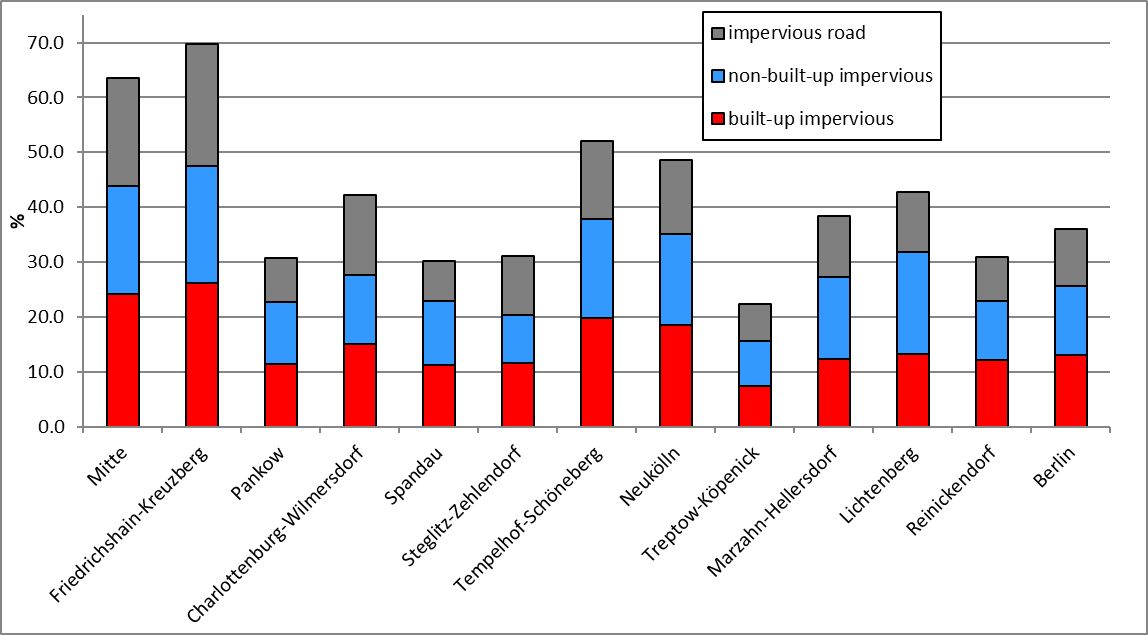 Fig. 7: Degree of impervious coverage by borough (in percentage of total area without bodies of water)
Image: Umweltatlas Berlin

Due to different ascertainment methods, a direct comparison between the impervious coverage values of 1990 and 2001 on the one hand with 2005 and 2011 or 2016 on the other hand is possible only to a limited degree. No change in the impervious area over the entire period of time can be ascertained from these figures.

In 2001, the degree of impervious coverage in Berlin amounted to 34.7 %, including streets and bodies of water. This data is to some extent based on evaluations of satellite images and other sources from the ‘80s and only applied to West Berlin. This mapping material was expanded to include East Berlin in 1990, and partially updated, in 2001 by means of aerial photography and topographical maps of the area. Here, use-specific flat values were assumed in some cases. Overall, the ascertainment methodology was non-uniform.

Tab. 7: Results of mapping of impervious coverage in Berlin, 1990 to 2016 (all information refers to the total area of Berlin, incl. streets and bodies of water). Due to changed evaluation methods, no change can be concluded for the entire period of time. The values for 1990 and 2001 are based on different evaluation methods, which do not permit any comparison with the values for 2005, 2011 and 2016. However, a comparison between 2005, 2011 and 2016 is possible
Image: Umweltatlas Berlin

Discrepancies may occur, due to rounding

Change Mapping of Impervious Coverage between 2011 and 2016

In the following, some striking examples are described that serve to highlight the – at times – very case-specific reasons for differences in mapping the degree of impervious coverage for areas between 2011 and 2016.

The decrease in impervious coverage in the commercial area on Blankenburger Straße in Pankow stands out. There has been no actual change here. However, large sandy areas created in 2011 during construction activities are meanwhile overgrown, whereby a decreased impervious coverage was mapped.

Upon analysis of the orthophotos from 2016, the significant decrease in impervious coverage at Schöneweide station can be attributed to the extensive dismantling of tracks and an increased degree of vegetation coverage of the track gravel.

The similarly striking (apparent) decrease in impervious coverage around the Tempelhofer Freiheit is due essentially to the total area being divided into several block segment areas. As a result, the areas overgrown with vegetation are more prominent compared to the mean value of the former total area in the 2010 block map. A change in impervious coverage is effected by areas of formerly impervious runways and storage areas that are gradually becoming overgrown. These changes are detected by the satellite sensor and are thus mapped as partially impervious areas. New residential areas are also clearly visible in the change mapping of the overall impervious coverage. In addition to the rural town of Gatow, the two residential areas at Oskar-Helene-Heim station stand out in particular. 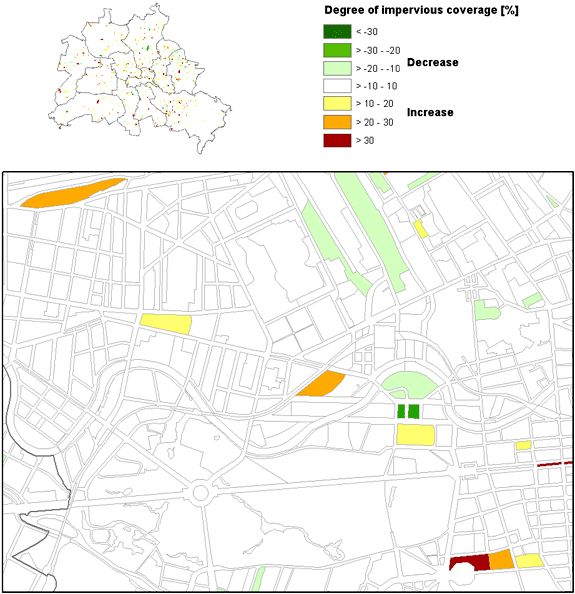 Fig. 8: Map of changes in impervious coverage between 2011 and 2016 (the result is also available as a PDF-Document)
Image: Umweltatlas Berlin