A single map consolidates all data collected by the Emissions Register since 1989, resulting in a detailed and complete representation of the long-term development of emissions in Berlin. During emissions calculations in 2015, the analysis of relevant polluters was extended significantly. This limits the comparability of emissions by heating systems with those measured in previous years. A new emissions report was drawn up to calculate emissions in 2015. In addition to the previous analysis of statistical parameters, this report includes a survey and considers a multitude of stakeholders. The final report (only in German) is available on the website of the Senate Department for the Environment, Transport and Climate Protection.

The individual layers of Map 03.12.2 Long-Term Development of Air Quality – Emissions, grouped into pollutants and polluter groups, illustrate which polluters account for the largest share of emissions of each parameter and in which areas of Berlin.

Analysis of the long-term development of air quality Tab.1: Types and numbers of plants and auxiliary plants requiring a permit in Berlin, 1989 to 2016
Image: Umweltatlas Berlin 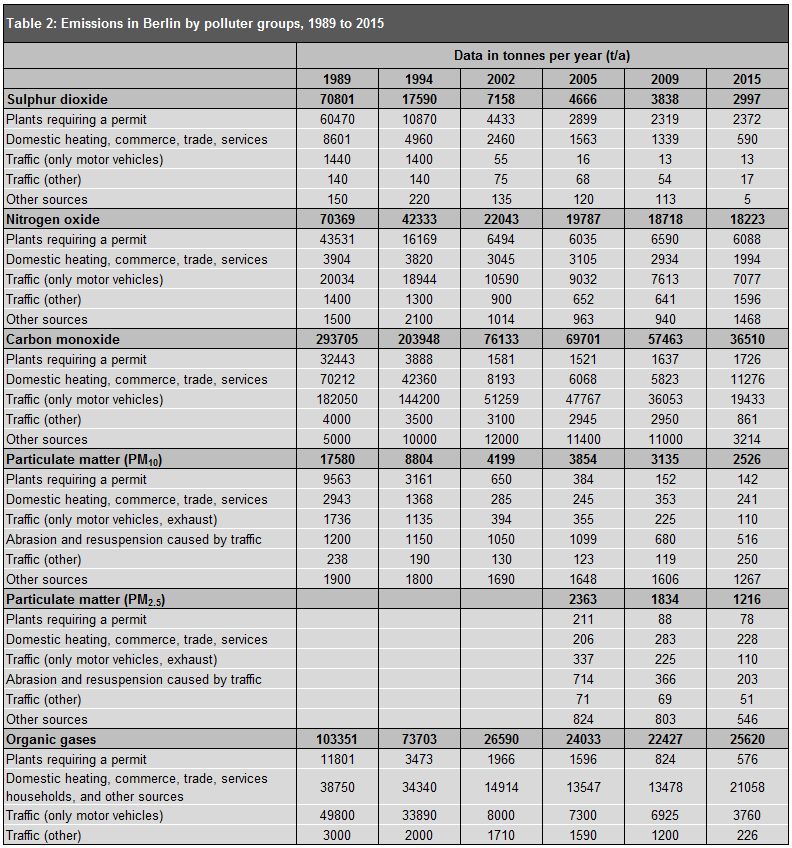 The particulate emissions from the exhausts of motor vehicles, which are a health hazard, have decreased by more than 90% between 1989 and 2015. One reason for this was the introduction of the environmental zone that included particulate filters, which resulted in a reduction in soot particles. This figure matches the diesel exhaust particulates measured in urban canyons, the main component of particulate emissions from exhausts. The measured concentration of diesel exhaust particulates at Measuring Container 174 of the Berlin Clean Air Measurement Network BLUME on Frankfurter Allee in the borough of Friedrichshain hence dropped by more than 50% during the period 2000-2015 (cf. also the analysis of Map 03.12.1, Station 174).

However, since particulate emissions from tyre abrasion and resuspension caused by road traffic have been reduced far less over these 20 years than emissions caused by combustion processes, motor vehicle traffic remains the second most important source of particulate emissions in Berlin, surpassed only by the category “other sources”. Motor vehicle traffic, including abrasion and resuspension, accounted for a share of 24 % of the PM10 emissions in Berlin in 2015, while the other sources accounted for 50 %. In the case of PM2.5, the figures were 26 % and 45 %, respectively.

The atmospheric pollution load caused by road traffic in the inner-city area, where some 1 million inhabitants live in an area of approx. 100 km2, is relatively high. Especially here, the problems of space utilization and competition for a growing road traffic volume will increase, if current trend conditions continue. Particularly, road transport of goods will, given unchanged conditions, meet increasing capacity limits in road space.

For further information on the different types of emission, click here (only in German).

The stations are distributed around the city in such a way that various spatial effect factors can be ascertained. Of the 16 stations, six are located along heavily travelled streets, five are in inner-city areas (both residential and commercial) and five are at the periphery of the city or in forest areas. Three stations are equipped with devices for measuring benzene and toluene.

Every weekday at 12 midday the measured values of the previous day are sent to several newspapers and radio and TV stations for public broadcast. Additionally, the values are published on the Internet, and can be accessed there under Tageswerte des BLUME-Messnetz (“Daily values of the BLUME measurement network”; only in German). In the case of increased ozone concentrations in the city, this information is broadcast to the public by some radio stations. As mentioned above, the separate website “Berliner Luftgütemessnetz” (Berlin Air Quality Measurement Network) offers a comprehensive range of data and analyses.

Monthly and annual reports, which, in addition to an evaluation of the preceding measurement period, also contain site tables of the measurement stations and an overview of limit and target values, are also available online (only in German).

Since 1997, the network has been expanded by initially 20, and now 23 small, low cost sampling devices installed at the streets, the samples of which are analyzed in the laboratory (RUBIS Measurement Network, as of September 2018). With these miniaturized devices, weekly samples of benzene and soot have been collected. In addition, passive collectors have been installed at these sites to ascertain nitrogen oxide values. These devices collect samples for periods of 14 days, which are then analyzed in the laboratory. These manually generated data are, due to the time lag necessary for analysis between measurement and generation of results, and also due to their minimal temporal resolution, only published as annual mean values in the annual reports.

The results of the measurements of the last years allow the following conclusions to be drawn:

The detailed, always current overview and compilation of the quality of Berlin’s air is provided online here (only in German).

But since immissions are also influenced by supra-regional effects and weather events, an analysis of causes cannot be only local, but rather must also investigate the immission of pollutants from outside, including cross-border transportation (cf. again Berlin Clean Air Plan 2011-2017).

For the present Map 03.12.1 Long-Term Development of Air Quality – Immissions, all available data collected in the measurement programmes described over the past 40 years was compiled and prepared statistically and graphically with regard to the measurement year. For spatial distribution of current and former measurement stations and measurement points, the following data can be accessed for each station:

The stations are divided into the categories traffic, residential area, industrial, suburban, and meteorological stations.

A total of 187 measurement stations are presented, of which 39 are still in operation (16 BLUME measurement containers, and 23 RUBIS measurement points, as of September 2018).

For the graphic representation of the development of the parameters total dust, particulate matter (PM10), sulphur dioxide (SO2), nitrogen dioxide (NO2), nitrogen monoxide (NO), carbon monoxide (CO), benzene and ozone (O3), the following limit and target values were referred to, which serve the purposes of health protection, unless otherwise stated: 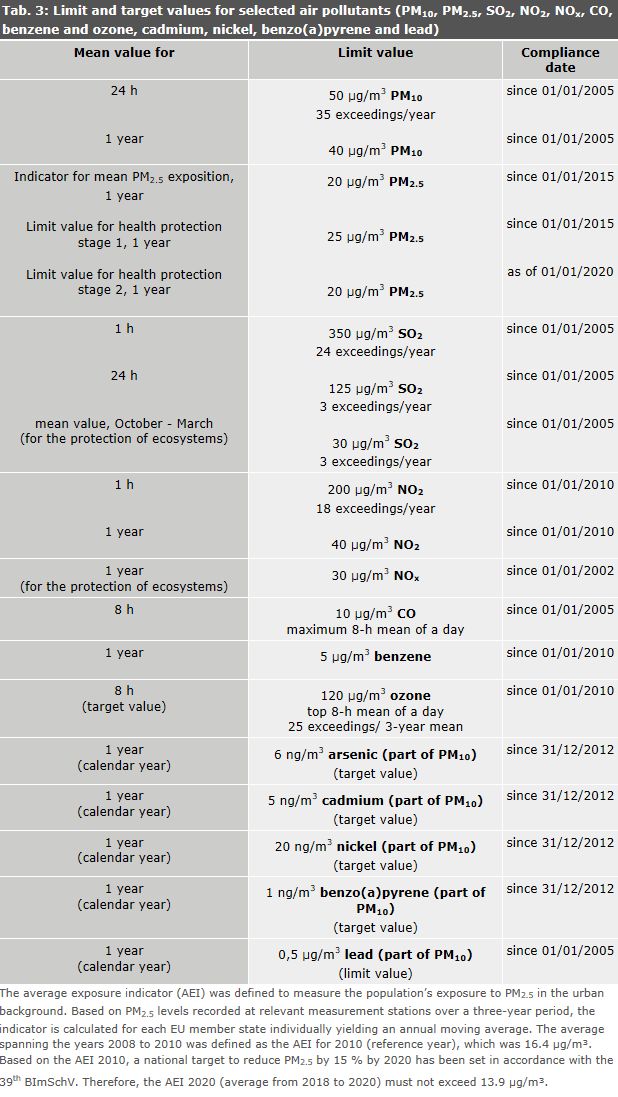 This overview provides further statutory limit and target values for air quality (only in German).