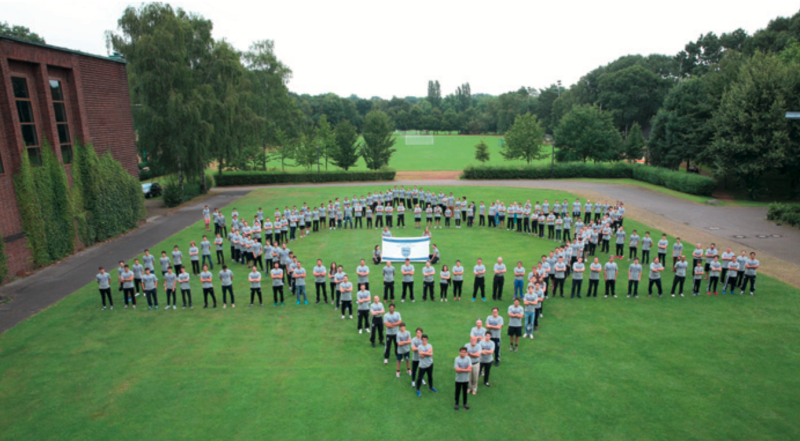 In August 1925 my brother Ralph was born, and in 1926 – I was not yet 5 years old – I became a member of the Jewish sports club “Bar Kochba.” Sport filled my life; sport was my love. We were no different from any other children.

But in 1933 Hitler came to power and very soon this brought changes to the lives of us Jews. Jewish athletes, for example, were not allowed in German clubs anymore, and that was one of the first visible indications of the inconceivable crime that followed.

It was also in 1933 that Dr. Cohn, my mother’s doctor, met my brother Ralph, a studious 8-year-old little fellow, brilliant in school, who at that time started to play the violin. Seeing Ralph, Dr. Cohn, a boxer himself, said that Ralph would make a fine boxer and that he should come to the Maccabi. Ralph joined and for a few years was a happy boxer, a Maccabäer, like you all are.

But he could never take part in a sports event like this; he was never able to do so. In January 1943, my brother, 17 ½ years young, was deported to Auschwitz. I never saw him again; he was killed only three weeks later. On the same transport was my mother, who was gassed the day of her arrival.

I went into hiding and was helped by good Germans in Berlin for 15 months, but was caught by informers in April 1944. I had the good fortune to be sent to Theresienstadt, not to Auschwitz. I survived, met Mr. Friedlander in Theresienstadt, and we experienced the Liberation together.

We emigrated in 1946 to America and saw no reason to go back to Germany, where they took our youth away, our future, and murdered our loved ones.

But in 2003 after 64 years – my husband had died in 1997 – I came back to Berlin for the first time to the city where I was born and had spent a very happy childhood. This trip was only a visit, but even this was not understood by some of my friends and relatives. “How can you go back to the land of the perpetrators?”, they asked.

In 2003 it was only a visit, but when I decided in 2010 to go back to Berlin permanently, it was totally incomprehensible to almost all of them. You as Jewish athletes may also have been asked how you could go to Berlin to take part in a Makkabiade, particularly in the Olympic Park of 1936.

When I came back more than 10 years ago I found a new Germany, not the Germany I had to leave more than 70 years ago. A new generation had grown up, one we cannot blame for the crimes of their grandparents.

Today I see it as my task to tell mainly young people in Germany my story. I have seen the trains that arrived from Auschwitz in Theresienstadt. I have seen the skeletons that were hardly human any more that we helped out of the cattle cars. It is important to give testimony about this horrible past and try to make sure that it will never happen again.

You all who are here today – athletes, helpers, organizers – you all know the story. Many of you come from families who have experienced this suffering and grief. So I don’t have to tell you in detail.

But I want to encourage you. To the question of whether it is right to come to Berlin for the Makkabiade, there is only one answer: “YES.”

And I would like to ask you to take part in this Makkabiade in memory of my brother Ralph and all the athletes who did not survive. This should give you the strength for top performances we all are looking forward to during the next few days and can be proud of together.

This Makkabiade should show the world that we are here and that we can win and of course also lose. The spirit of the Makkabiade stands for tolerance, being open to the world, and living together peacefully. And there is no better place from which to send this message into the world than here 70 years after the war!

For me it is a great and happy occasion to be able to take part in the Jewish sports event of the Maccabi in Berlin, where I was born 93 years ago. I wish all the athletes lots of luck – may the best ones win – and all the guests many happy hours at the Maccabi Games of 2015.