The Internet has made our world smaller and much more accessible. But the human brain – that marvellous time-tested machine – is often still the necessary ingredient behind magical connections.

So it was late last year when Keith Lawson (Kurt Lazarus) in England recognized my name after reading my article in the December 2015 issue of aktuell. The article, “By chronicling memories, we strengthen bonds,” recounted a journey that led to the creation of a family album that pays tribute to the entire Abrahamson family. Keith enquired by email if I was the Günther he knew in 1939. He had a photograph of us standing side by side. 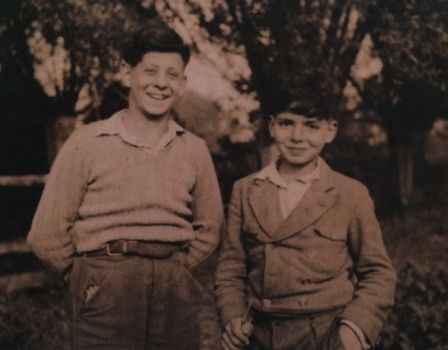 I met Keith in Barham House, a refugee reception camp near Ipswich in southeastern England. Thanks to the World Movement for the Care of Children, I had escaped Berlin on a Kindertransport on July 13, a lone 12-year-old making his way to England with other Jewish children escaping from Germany, Austria and Czechoslovakia. My only sibling, Daisy, had gone to Palestine the previous year.

Fourteen-year-old Keith was also from Berlin. His parents put their only child on a Kindertransport on July 19. On September 3, 1939, Prime Minister Neville Chamberlain announced that Britain was at war with Germany.

Barham House sheltered about 800 refugee boys who could not be placed with relatives or foster families. The oldest were about 16. I enjoyed Barham House. When I arrived, it was mid-summer and it seemed like a long vacation.

We slept in dormitories with about eight to ten boys in a room. We really had no tasks other than to make our beds, write letters home, tend to a large kitchen garden and do some other agricultural chores. I was allowed to help look after the camp’s chickens.

Boys were constantly leaving Barham House. Some joined relatives or families who had agreed to accept refugees while others were placed in foster homes. It wasn’t long before Keith and I went our separate ways.

In late October 1939, I was sent to a children’s home in Selkirk, Scotland. It was an unhappy experience. Life improved when I left school at 15 and moved in with the Millar family to help on their farm.

Keith was offered a job in early 1940 on a farm, about 10 miles from Barham House, where he and some of the older boys from the camp had helped in bringing in a delayed sugar beet harvest a few weeks earlier.

I eventually returned to school and after college left for Canada in 1952 for an around-the-world trip. I did not get beyond Canada where I was employed by the government in various aspects of arctic administration and economic development. My first job was managing a reindeer enterprise. That’s where I met my wife, a dentist and a recent immigrant from Berlin. We were married in Tuktoyaktuk.

Keith, meanwhile, left agricultural life to serve in the British Army’s Corps of Royal Engineers between 1943 and 1947, serving in Burma until the end of the war and, later, in India and Singapore. He capitalized on his experience with mechanical equipment and interest in management to become plant manager and operations director for companies in the United Kingdom where he was responsible for all plant and transport used in their UK and overseas projects including many in the Middle East.

Sadly, Keith and I also both suffered family tragedies. Keith’s parents were killed in Auschwitz in 1943. My mother, a widow, was deported to the Riga concentration camp in Latvia in 1942.

And due in part to these tragedies, Keith and I both also documented our families’ histories. In 1996, Keith wrote From Berlin to Live and dedicated it to his children and grandchildren. In recent years, my Israeli family and I worked with author Simon Löber to create a family album that joined similar albums as part of the permanent Wir Waren Nachbarn (We Were Neighbours) exhibit at Schöneberg’s city hall in Berlin.

Although more than three-quarters of a century has flown by since Keith and I were together at Barham House, in some ways, time has stood still. Today’s stark crisis of refugees escaping war to relocate to new countries and cultures could just as easily be a scene from England, in 1939, when both the German language that we spoke and unusual clothing that we wore were unfamiliar to local citizens. Hopefully, countries around the world will continue to accept refugees, just as Keith and I were welcomed to England’s shores decades ago.