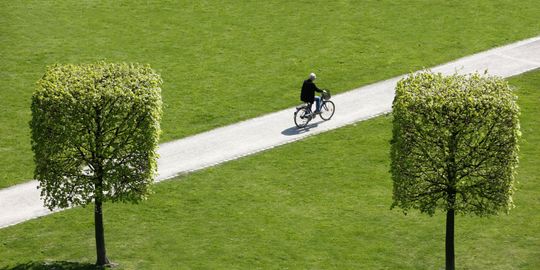 Climate change is a much-discussed issue, but many terms and processes are not self-explanatory. Here we answer frequently asked questions and show ways to approach the topic without stress.

What is the difference between climate and weather?

Weather and climate are closely related, but they are not identical. While the weather always describes the current state of the day – Does it rain? Is the sun shining? Is it warm or frosty cold? Is there a storm or just a light breeze? – describes the climate weather over a longer period of time, so that average values are produced.

If, for example, 5°C prevailed on 15 March 2009 and 18°C on 15 March 2019, this does not yet mean a fundamental change in the climate; it can also simply be a particularly warm middle of March. Only if the temperatures remained so warm year after year on March 15, one could speak of a climate change in the temperature. Thus, outliers in the weather on average are included in the description of the climate. Only if such outliers repeat themselves very frequently, one can assume a new regularity. In order to describe the climate and determine climate changes, usually a period of at least 30 years is considered.

Simple rule of thumb: If it snows this time of year, it’s weather. If it snows in most years around this time, it is climate.

collapse
What is climate change?

That the climate has changed and continues to change throughout the Earth’s long history is a natural process; there are ice ages and warmer periods between ice ages. At the moment we are in a naturally warmer period after an ice age. So it’s nothing special that it’s warmer now than it was 10,000 years ago. However, these natural climate changes take place over hundreds of thousands and millions of years.

When we speak of climate change as a problem for the planet today, we mean climate change that is extremely accelerated by humans and which has been happening rapidly since the beginning of the industrial age around 1850 with its machines and factories. This climate change is being linked to an unnatural change in temperature: Within 150 to 200 years, the average temperature of the entire Earth rises throughout the year as it has previously risen only in thousands to tens of thousands of years. This warming is caused by the greenhouse effect.

collapse
What is the greenhouse effect?

The greenhouse effect is caused by the accumulation in the earth’s atmosphere of greenhouse gases contained, among other things, in the exhaust gases from factories, power plants, cars and other motor vehicles, aircraft and private households. The most important greenhouse gases, which often occur in man-made exhaust gases, are carbon dioxide (CO₂), methane (CH4), nitrous oxide (N₂O), ozone (O3) and water vapour.

A graph of the German Weather Service illustrating the warming trend can be found here – only in German.

collapse
What is the difference between climate change and global warming?

The consequences of climate change are manifold. In general, an increase in temperature and weather phenomena or extremes is expected. But this can also lead to many other consequences. For example, there is the danger that the warm Gulf Stream, which flows from the Gulf of Mexico along the North American coast and then across the Atlantic to the coast of Great Britain, will change course as a result of changing (sea) temperatures, so that the coasts along which it would no longer flow would experience cooling rather than warming.

collapse
How reliable is climate science?

Since 1988 the scientists of the Intergovernmental Panel on Climate Change (also known as IPCC) have been investigating the state of climate research and its results and presenting their reports on this state of research after extremely thorough and lengthy examination procedures. In these reports, which are around 2,000 pages long, explicit mention is also made of the fact that there is still uncertainty about individual topics and how these uncertainties come about. Since the 1995 report, the Intergovernmental Panel on Climate Change officially speaks of a “discernible human influence on the global climate”.

collapse
What are the consequences of climate change?

The study of the consequences of climate change is to a large extent a matter of predictions based on complicated and carefully developed scientific climate models. However, more and more of these expected consequences can already be observed.

The greenhouse effect increases the average air temperature around the world and the glaciers and ice caps of the poles melt, causing sea levels to rise worldwide. This is particularly problematic for islands, coasts and coastal towns, as well as for landscapes that are partly below sea level, such as parts of the Netherlands. The oceans are also warming up, which can lead to ocean currents taking new routes and already causing more and stronger hurricanes to form over the water and causing major damage when they hit land.

The warming of air and water or changing rainfall also poses a major challenge to flora and fauna, leading to migration and species extinction. Climate change is also forcing more and more people to leave their homes: Islands, coastal and low-lying regions are being flooded, and increasing natural disasters such as droughts, storms or floods are driving away the inhabitants of some regions.

A summer of a century like 2018 in Berlin will only become a summer of a decade with serious consequences for water, agriculture and forests, as well as for animals and plants.

More information on climate change and its consequences can be found at the German Environment Agency.

collapse
What is the impact of climate change in Berlin?

Precisely the phenomena that are described above can be observed in Berlin. In the last 100 years, the average annual temperature in Berlin has risen by about one degree. At the same time, more hot summer days and nights and fewer winter days with frost and ice have been observed in the last half century. Rainfall is concentrated in rarer events and dry periods become longer. If the trend continues like this, the climate in Berlin around 2100 will resemble the climate in Toulouse in southern France.

If there is no precipitation, more pollutant particles will accumulate in the air, which can have harmful consequences for health – all the more so at higher temperatures. Heavy rainfall, on the other hand, can cause water pollution. On the one hand, all sorts of things that do not belong in it are washed into the water, and on the other hand, the mixed sewage system overflows and the waste water is flushed into the Spree and the canals. In addition, tunnels and cellars are flooded.

You want to know more about the consequences of climate change in Berlin? Click here for more information from the German Environment Agency – only in German.

collapse
Where is CO₂ created and what are CO₂ equivalents?

Carbon dioxide (CO₂) is an essential component of all organic matter on the planet and thus of all life. When fossil fuels (oil, gas, coal) are burned, large amounts of CO₂ are released, which were contained in the earth millions of years ago. CO₂ is a component of industrial exhaust gases, as well as of exhaust gases from means of transport (car, airplane, etc.) and also plays a major role in private households, depending on which energy sources are used to operate the heating system and to generate the electricity consumed.

This means that everything in our lives has its own CO₂ footprint. Every single product was manufactured and transported under the emission of CO₂. About 84% of all man-made CO₂ emissions come from heat and electricity production, agriculture, industry and transportation.

However, since CO₂ is not the only greenhouse gas, the other greenhouse gases can be converted into CO₂ equivalents (CO₂-e) for better comparison. Thereby it is taken into account that the different gases contribute differently to warming and remain in the atmosphere for different lengths of time.

On average, Germans produce 11.6 tonnes of CO₂ equivalents per capita per year, putting them in 23rd place in an EU comparison. Only the Netherlands, the Czech Republic, Ireland, Estonia and Luxembourg perform worse with up to 17.2 tonnes per capita. For approximately 1.1 tons of the German per capita emission, however, we are not individually responsible: This is a Community emission – for example through infrastructure – which is passed on to all citizens.

In order to limit global warming to 1.5°C, consumption per capita must be reduced to 1-2 tonnes. Reduce CO₂-e consumption from just under 12 to a maximum of 2 tonnes CO₂-e? That sounds almost impossible. But do not be discouraged. With the help of the free CO₂ calculator of the German Environment Agency – only in German you can see how far you are on your way and how you could further reduce your consumption.

collapse
How can CO₂ be removed?

CO₂ does not degrade itself. The natural degradation process takes place through plants and water bodies. Plants convert CO₂ into oxygen by means of photosynthesis. This is why the forests on our planet play such an important role. All the more worrying, however, is the fact that every two seconds forest areas the size of a football field are logged off worldwide.

Water bodies can also bind CO₂, but there is also a maximum value that will most probably soon be reached. In addition, waters with a higher CO₂ content are becoming increasingly acidic, which has serious consequences for many aquatic plants and animals.

An example of this is the progressing coral bleaching in the Pacific. Coral bleaching occurs when a body of water becomes too warm. The algae (zooxanthellae) that live together with the corals, are responsible for the bright colours of the corals and are vital for their nutrition, begin to produce toxins instead of nutrients when they get too warm. As a result, the corals repel them and lose their colour at the same time. If the zooxanthellae do not return within a few weeks, the corals that depend on them starve to death. Once dead, coral reefs can only recover under optimal conditions and take decades to do so.

There are numerous projects exploring how CO₂ can be technically retrieved from the air and deposited, for example, in deep layers of the earth, but so far no solution with a broad impact has been found where the risk of negative side effects to the ecosystem is low enough to allow large-scale deployment.

You can find out more about the removal of CO2 from the atmosphere (so-called ‘negative emissions’) and the risks involved at the German Environment Agency – only in German.