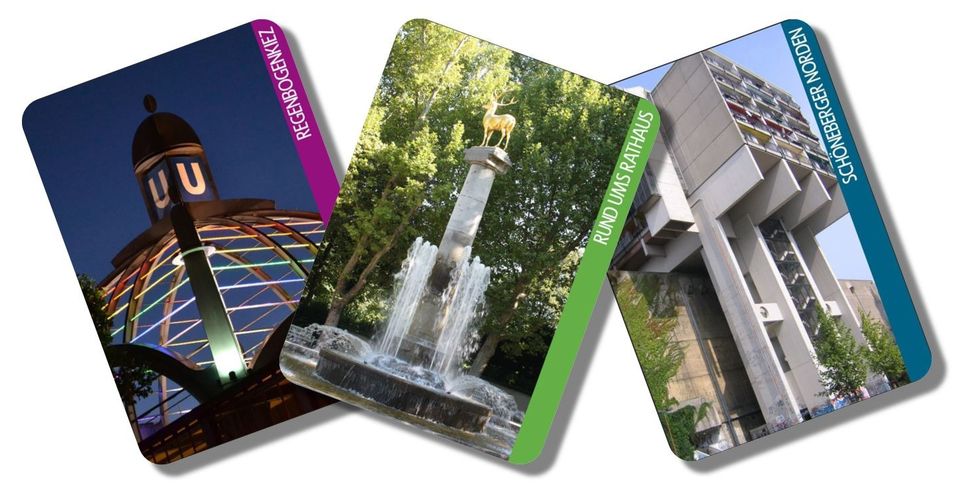 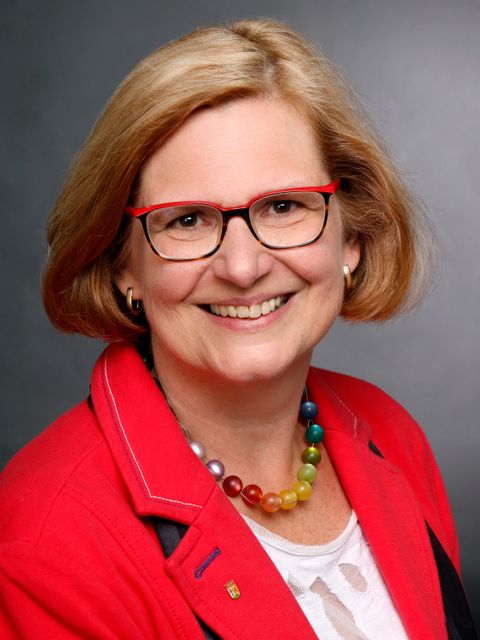 the Bayerisches Viertel is one of the quaint picturesque neigbourhoods of Schöneberg and the area around Schöneberg Town Hall is deeply steeped in Berlin’s history.
Nearby is the lively „Akazienkiez“, with its individual and independent shops, cafés and restaurants. This district is dynamic and boasts an almost Mediterranean flair in the summer.

Welcome to our district!

Where Schöneberg became a city

The Bayerisches Viertel, named after its predominantly Bavarian street names, is situated north from Schöneberg Town Hall. This established living quarter, with its upper-class residential houses situated in quiet streets and idyllic squares, was built around the 1900s by Salomon and Georg Haberland. It became a popular living and working area of affluent Jewish citizens.
Rathaus Schöneberg, which was built shortly afterwards, was an expression of the new and confident city of Schöneberg and was destined to play an important part in German postwar history. Discover the streets of this interesting quarter or, visit the park by the town hall and leave your cares behind. Alternatively, discover the hustle and bustle of close by Akazienkiez, with its individual and independent shops, cafés and restaurants. It is attractive for those who want to explore a little bit or sit in a café and watch the world go by.

The „Bayerisches Viertel“ was planned and built as a comfortable living quarter for rich Berliners between 1898 and 1908. With its generous squares, front yards and grand residential houses, the area was popular with artists, literates and scientists and the liberal Jewish bourgeoisie. The systematic humiliation, oppression, displacement and assassination of the Jewish population during the Nazi-era is made comprehensible through an 80-piece memorial by Renata Stih and Frieder Schnock, which is distributed through the streets of the quarter. Many so-called „tripping stones“ on the pavement also commemorate the victims of Nazi-Terror.
Schöneberg Town Hall, on which construction started in 1911, became the centre of the divided city from 1949. Until 1991, the Governing Major of Berlin (West) was based here and from 1945 until 1993, the Berlin House of Representatives also had its home here.
The entrance to Akazienkiez is Apostel-Paulus-Church. It was built at the end of the 19th century in the style of „Märkisch“ redbrick Gothic. Akazienstraße was named after an acacia grove, which bordered a small field track and some of the trees still remain.
At the upper end of Akazienstraße runs Hauptstraße, which was the former centre of Schöneberg village and was home to some celebrities: David Bowie lived in No. 155 from 1976 – 1978 and he was occasionally joined by punk rocker, Iggy Pop. During his Berlin times, Bowie created the albums „Low“, „Heroes“ and „Lodger“.

Café of the quater. In short films and stories, the lives and fate of the jewish inhabitants of the Bayerisches Viertel is told.

A location for cabaret, culture and theatre which revives the times of famous Berlin night life during the roaring 1920s. The „Bar jeder Vernunft“, in its historic mirror tent is a cultural stage with special charm, northwest of Viktoria-Luise-Platz.

Follow Haupttsraße towards the east and turn into Kolonnenstraße. You are now on the so-called „Red Island“. The area owes its name to its position between two main rail tracks and predominantly left-wing working class inhabitants during the Weimar Republic. Here you can find complete streets with preserved buildings built between 1880 and 1918. Marlene Dietrich grew up in Leberstraße 65. Landmark of the quarter is the protected gas cylinder, which can also be visited (Info: www.euref.de/de/community-besucher/gasometerbesteigung/).

Also worth a visit: Königin-Luise-Gedächtnis-Kirche (Königin Luise Memorial Church) on Gustav-Müller-Platz.
Continue to follow Kolonnenstraße, this will turn into Dudenstraße and lead you to the former Tempelhof airfield. This is the location where planes landed during the Berlin airlift from June 1948 to May 1949. The airport was closed in 2008 and the airfield is now a popular urban recreational area.

Download your mini-guide for the Kieztour “Around Schöneberg Town Hall” (including map) here: 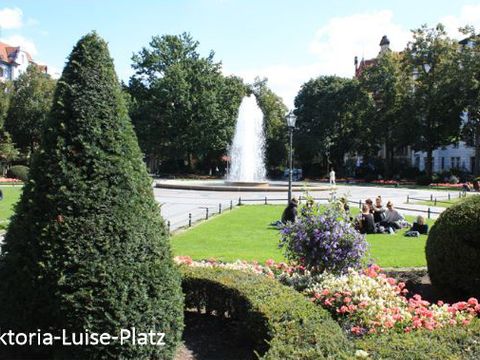 The starting point is Viktoria-Luise-Platz (U4), named after the last emperor’s only daughter. It was designed by garden architect Fritz Encke in 1899. The ensemble of grand residential houses, some with imposing Art Nouveau facades, the front yards and the fountain and colonnades are now protected monuments. Sophisticated restaurants and cafés inliven the otherwise quiet area. House No. 11 was the home of Billy Wilder, famous director of the film „Some like it hot“.
The renowned vocational training centre „Lette Verein“ has its base here. Founded in 1866, the „Society for the Furtherance of the Working Capacity of the Female Gender“ gave unmarried females the chance to study for a vocation for the first time. 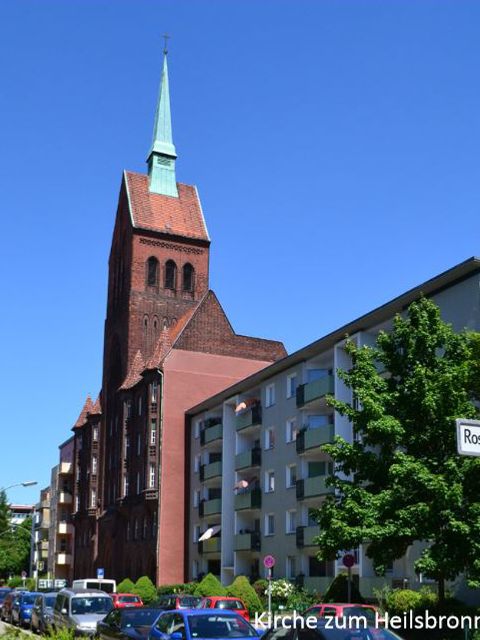 From Viktoria-Luise-Platz, through Regensburger Straße and then to the left through Ansbacher Straße. Cross Hohenstauffenstraße and walk along the left until you reach Heilbronner Straße, turn right here. This part of the quarter was heavily damaged by bombing raids during WWII. The majority of buildings along this street are part of the Berlin reconstruction program, recognizable by the bronze plaques at the entrance doors.
Under Nazi rule, the majority of the Jewish population in the quarter was deported and assassinated but some managed to emigrate. To acknowledge these dark times, a heritage area was created in 1993: „Places of Rememberance“, which consists of 80 signs with symbols, law texts and personal reports, which illustrate the systematic disfranchisement of Berlin’s Jewish population.
From a distance you can see the tower of the church „Zum Heilsbronnen“: go to the end of Heilbronner Straße turn left into Barbarossastraße, then right into Münchener Straße. On the left on the corner of Penzberger Straße is the memorial stone for the Penzberg „Night of Murder“, which happen on the 28th April 1945. Penzberg is a twin city of the district.

Do you fancy a trip to Haberlandstraße 8? This was the home of Albert Einstein. An information panel in front of the post war building remembers the Nobel prize winner.

3. The site of the former synagogue

On the corner of Münchener Straße/Westarpstraße stood the synagogue of the district.
Architect Max Fraenkel designed the building, it had space for 836 people and was inaugurated in 1910. It wasn’t destroyed during the Reichspogromnacht due to its situation in between residential building blocks, however the building was heavily damaged during the war and was finally pulled down in 1956.
Since 1999 the pupils of Löcknitz Primary School commemorate the victims of the Holocaust by building a brick wall memorial, which is continuously added to each year and each stone bears the name of a victim.

Turn right and walk along Grunewaldstraße towards Bayerischer Platz, the square is the centre of the quarter. Café Haberland above the U-Bahnstation is home to an historical hub. The perfect spot for those, who like to relax and learn a bit more about the history and the inhabitants of the quarter. 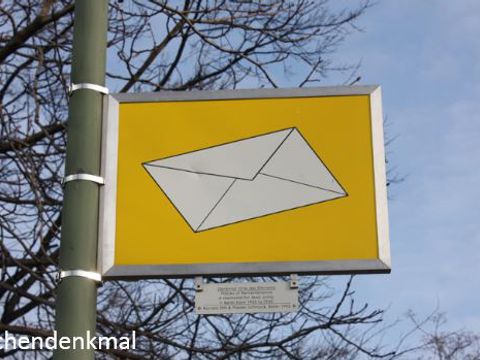 Continue to walk along Grunewaldstraße and turn left into Bozener Straße. This quaint little street suffered fewer damages from the war and still reflects the original flair of the quarter. At the end of the road turn left, then right for a short walk through Meraner Straße and then left again into Wartburger Straße. Walk until you reach Salzburger Straße and from here you can see the Town Hall to your right. Along the way you can find more panels and „tripping stones“.

Schöneberg Town Hall commenced operation in 1914 and was the symbol of freedom for the divided city. Dignitaries like Ernst Reuter or Willy Brandt worked here.
After the construction of the Berlin Wall, John F. Kennedy gave his famous speech in front of the town hall. Since its installation in 1950, the „freedom bell“ rings from the town hall tower every day at noon. The bell is based on the model of the „liberty bell“ in Philadelphia and was a gift from the American people.
A panel in front of the town hall informs visitors about the fall of the Berlin Wall. 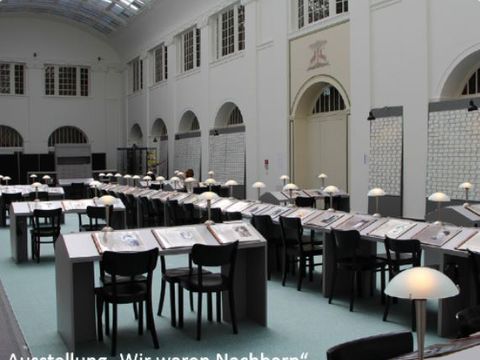 The exhibition shows bibliographic albums, which document in a very personal way the story of life and sufferings of the Jewish population in Schöneberg.

Do you fancy a little break? Rudolph-Wilde-Park is the perfect spot for that. With its fountain in the centre which is crowned by the golden stag, the heraldic animal of the district, the park almost resembles spa gardens. Schöneberg U-Bahn station, built in the style of an orangery, divides the park in two. The western part of the gardens, beyond the station, has a distinct landscape character and continues into Wilmersdorf public park. While relaxing under shady trees you can easily gain an impression of the relaxed urban living ambiance in this part of the district. From here you can continue your tour into Akazienkiez via Belziger Straße.

Walk through Belziger Straße opposite the Town Hall towards Akazienstraße. A multitude of little shops, restaurants and cafés awaits you. Discover the special mix of creative to alternative and mundane to exclusive atmosphere which is typical for this „Kiez“.