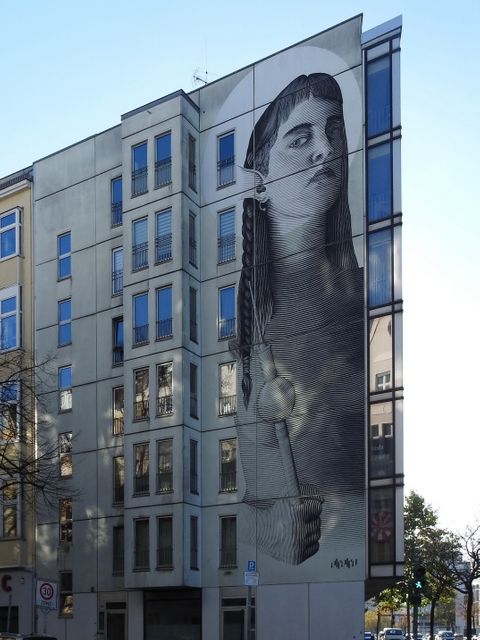 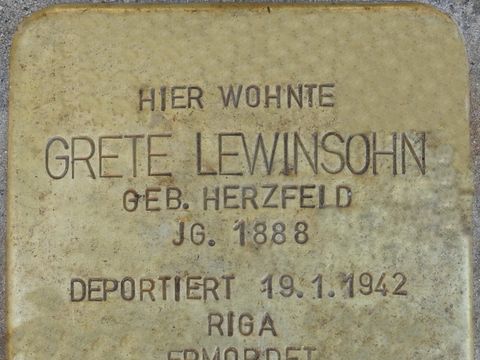 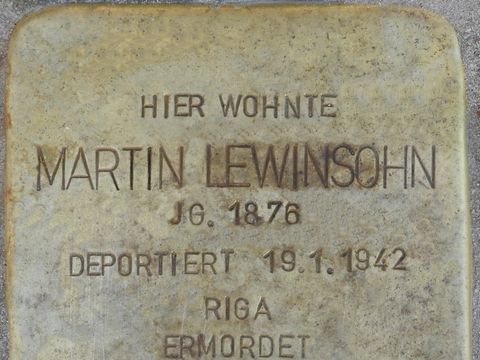 I grew up in New York City hearing about my mother’s parents, Martin and Grete, and Osterode in East Prussia where she grew up. My grandparents came alive for me when my husband and I visited Berlin four years ago. We followed their path from Mommsenstrasse to Grunewald Station Platform 17.
I am struck by parallels between my maternal grandparents and me. My mother looked like my grandmother and I look like my mother. My brother, Martin, was named after our grandfather.

Grete and Martin were married on February 14th, as were my husband and me 64 years later. I have my grandmother’s beautiful album that she began when she married Martin in 1912. They honeymooned in Venice, a city I first visited when I was 15.

I learned to cook from my mother, who learned to cook from her mother. I have my grandmother’s handwritten recipes written in spidery script that I cannot read. But I know how to make Grete’s eierkuchen – loved by me as I grew up, my sons, and now my grandchildren.
I inherited all the Lewinsohn silverware monogramed with “L”. When I use it, I think of my grandparents. I have silver objects that my grandmother sent to my mother in a suitcase to England in 1941.

As a result of the family research I did in Berlin, I discovered a second cousin living in England and connected her with our second cousin in Israel. A new, three-way relationship and friendship was formed. Our family, born in Germany, lives on in the United States, England, and Israel.

Warmest thanks to my dear friends Martin and Doro who introduced me to their friend Helmut who initiated the stolpersteine process for me that resulted in the laying of two stones today. 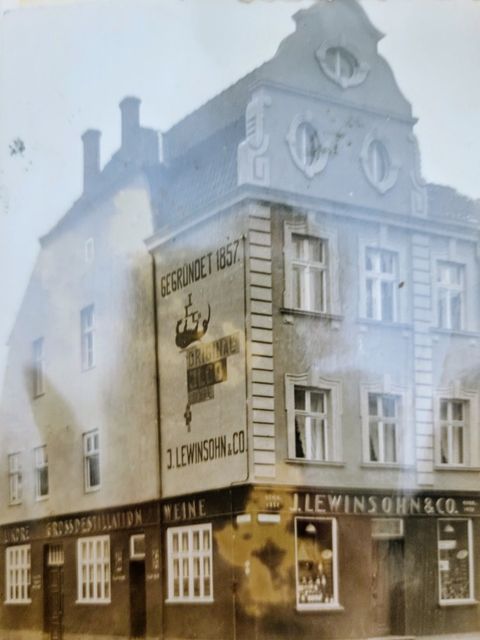 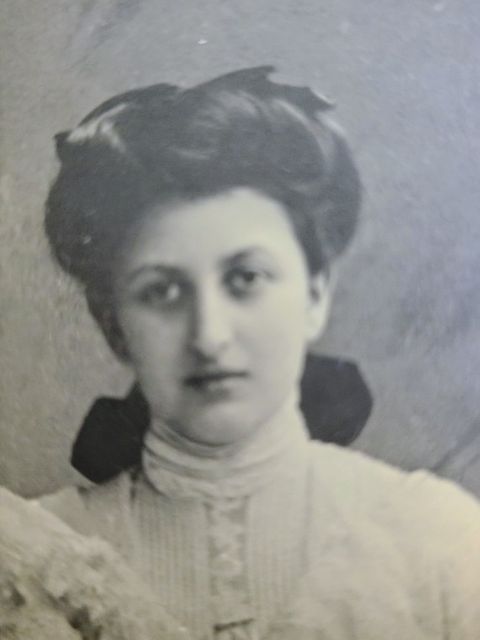 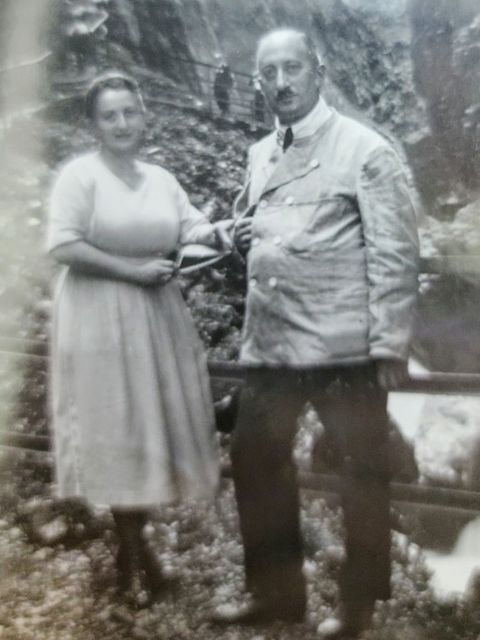 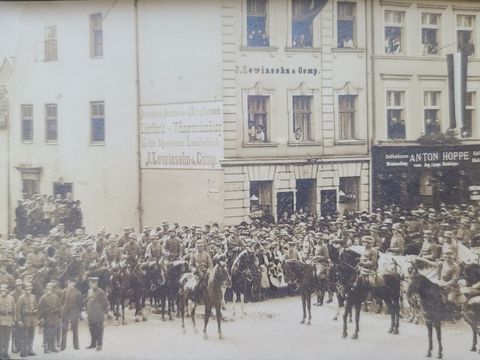 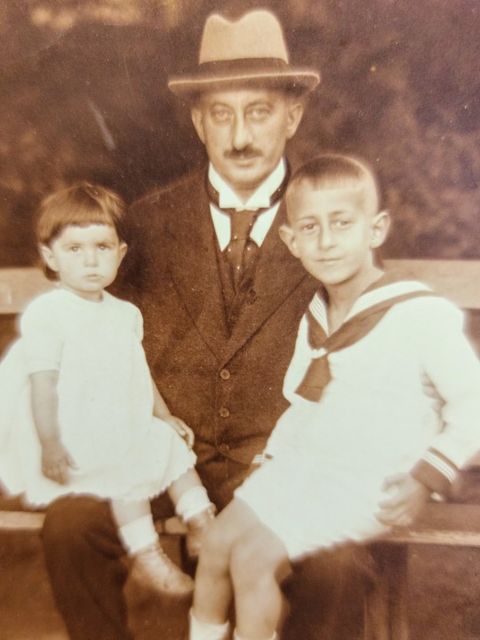 The story begins with Martin Lewinsohn and Grete Herzfeld. It ends in Ghetto Riga where they were taken on January 19, 1942 by train from Grunewald station.

Martin was born on December 18, 1876 in Osterode*, Ostpreussen (East Prussia). East Prussia was, prior to World War II, the eastern-most portion of the German empire. He was one of six children – four sisters and one brother. After his father died, he took over the family business – a distillery producing liquor, wine, and soda.

Two sisters could not find husbands and never left home. One became head of the business office and the other kept home for the two of them. Martin’s mother, in spite of raising six children, found time to tend bar when needed. The bar was part of the business. It was on street level and very popular.

Grete Herzfeld was born in Peine, Lower Saxony near Hanover, on April 8, 1888. She was the oldest of three. After finishing high school, there was not much for Grete in her hometown and the outlook for local marriage was poor. Her parents sent her to Berlin, to a pension where she was housed, fed, and exposed to educational and cultural experiences like plays, opera, concerts, and additional schooling.

After a year, she returned home. An uncle who lived in Koenigsberg, East Prussia, arranged a meeting with an eligible young man who had difficulties finding a suitable young lady. They fell for each other and married soon after, on February 14, 1912. They honeymooned in Venice. Ten months later, Curt arrived on December 13, 1912. They rented a large apartment in Osterode on Wilhelmstrasse no 8. It occupied an entire floor and was elegantly furnished. On December 17, 1916, a daughter, Hildegard, was born.

Grete’s responsibilities were to run a smooth household, provide Martin delicious food, and take care of the children. He was spoiled at home and expected the best of everything – which he got.
Grete was always well and fit. She was always busy, never took a rest, never tired. She baked and canned fruit. Twice a week she went to the market, buying fresh vegetables and things the market had to offer.

In the middle of town, was the beautiful Drewenz See. It was a sizable lake, good for all water sports and fishing. Grete went there for quick swims. She taught Curt and Hildegard to swim. They swam every day after school and when it froze over, which it did every winter, they went ice skating.

*Note: The former German town of Osterode in East Prussia is now Ostróda in present-day Poland. The Jewish population in 1933 was 123. By May 1939, all but one Jew had left Osterode. On January 21, 1945, Osterode was captured by the Soviet Union Red Army without fighting but 70% of the town was destroyed afterwards. With the conquest by the Soviet Union and the Potsdam Conference, the town became part of Poland.Martin had a Chevy pickup truck for deliveries and installed moveable wooden benches for people to ride on. Often, on sunny days, friends would come over with picnic baskets and join for a ride to some pretty spot. They brought blankets to sit on benches. Martin sat in front, next to the chauffeur, to tell him the way. He did not drive.

Nazi troublemaking in East Prussia started early. When Martin was ordered to appear and sign over what he owned, Grete went because she feared for Martin. She was forced, with a gun placed next to the paper, to do the sad task. With that final act, they recognized the seriousness of the situation and decided to move to Berlin. They shared a small apartment with friends who had gone there for the same reason.

Grete and Anna, the two maiden aunts, followed. They took another apartment – primitive and small. The four of them somehow felt safer. Martin had served in World War I and earned a red cross. He thought that would help them.

On January 19, 1942, they were arrested by the Gestapo and deported to Riga in Latvia. Martin and Grete became victims of the Holocaust. The maiden aunts made it to England.

After Curt’s ‘abitur’ (age 18), he went to Freiburg University to study medicine. He was halfway through but unable to continue. In order to prepare for a life in Palestine, he went to the Netherlands to work for a farmer. He lived on a kibbutz where he met his wife. He changed his name from Curt Lewinsohn to Yoram Ariely. He worked as a bookkeeper. Curt died in January 1982.

After finishing school, Hildegard left for Berlin. From 1934 to 1935, in preparation for a year in Israel, she worked a preparatory year in the Jewish orphanage for children in East Berlin. She did baby nurse training at the Jewish Kinderklinik in Charlottenburg (Berlin) from 1935 to 1936. From 1936 to 1938, she did nursing training in the Jewish Hospital in Frankfurt am Main and passed the state board exam. The hospital employed her until she left for England in April 1939.
She found a job in Sheffield through a Jewish organization as a staff nurse at the children’s hospital. Hildegard got married in Blackburn in May 1940. Two weeks after the wedding, her husband immigrated to the United States and settled in New York City. Hildegard remained in England until the end of the year and immigrated to New York.

When she became a naturalized U.S. citizen, she changed her name from Hildegard to Hilda.

by Helen Baumeister May 2020