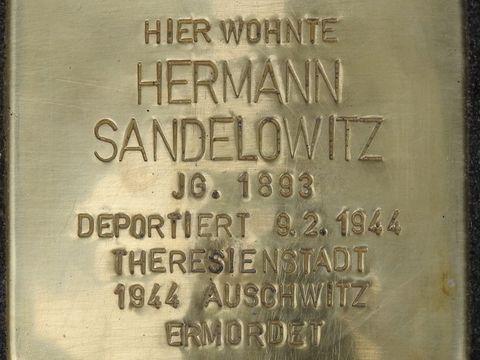 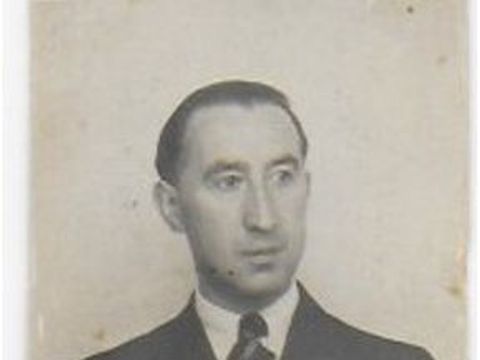 Berlin, 4th December, 2019
Ceremony at Grolmanstr. 29 for the laying of a Stolperstein
(in the presence oft he artist Gunter Demnig)
In memory of: Hermann Sandelowitz

Hermann was born in London, England on 2nd March 1893. He had a twin sister, kate, who died in London in 1895. His parents were Meyer Sanelowitz and Sarah sandelowitz (née Barnett). They married in Loondon in 1889. Sarah was born in 1865, died circa 1936 and is buried in the Nordenburger judischen Friedhof.
Hermann’s older sisiter Leah, born 1st may 1890 London, was deported 20th may 1944 from Königsberg to Theresienstadt, Leah survived Theresienstadt and died in Berlin in 1950.
Hermann Sandelowitz married Minna Arndt (born 31 December 1892 in Korschen, died 29 January 1961 in London, England). Minna (Minka) was a Lutheran Protestant. Hermann and Minka divorced during Nazi times in an Attempt to protect their only child: a daugther Ingeborg Ruth Gladys Sandelowitz, born 28 February 1924 in Berlin, died 7th April 2008 in Barcelona, Spain.
After a divorce, Hermann lived in a boarding house at 29 Grolmannstr., Charlottenburg. He was transported to Theresienstadt on 9th February 1944 (transport 1/10/. 100 people deported, 31 murdered, 69 survived). Hermann was then transported from Theresienstadt to Auschwitz on 29th September 1944 where he was murdered (transport El.no 762. 1500 people deported, 1343 murdered. 157 survived).
The Sandelowitz family originated in Russia/Poland arriving in England at some point bevor 1889. They moved from England to Germany some time after 1895. In the 1920s, Hermann had a textile factory/business in the Berlin area, which he managed with his younger brother (Samuel Sandelowitz, born 1895). His brother, wife and daughter emigrated to the USA some time before the outbreak of war, as they were concerned about developments unter the nazi regime)
Hermann’s first Grandson, Mikael Sandelowitz, was killed in the Black Thursday bombing raid in Berlin on 16th December 1943 (along with Inge‘s first husband). Hermann’s daughter Inge went to marry an Englisch solider Pete Murray Sykes in May 1947 in Berlin. They had on son, Stephan Hermann Murray-Sykes, born London 17th may 1954. Stephan and his wife Kate (née Hulley) have 2 children, Hermann’s Great Grandchildren, Hannah Kate Die (née murray-Sykes) born London 14 October, 1990 and Alexander Stephan Murray-Sykes, born Wiedbaden 31th January, 1992. Hermann’s direct descendants all currently reside in England.

„A Thought“ (Fromm y paternal Grandfather percival Sykes, author & dramatist, who hadt his poem „The Great Silence“ accepted by the British Royal Family after the 1st World War…At the Cenotaph)