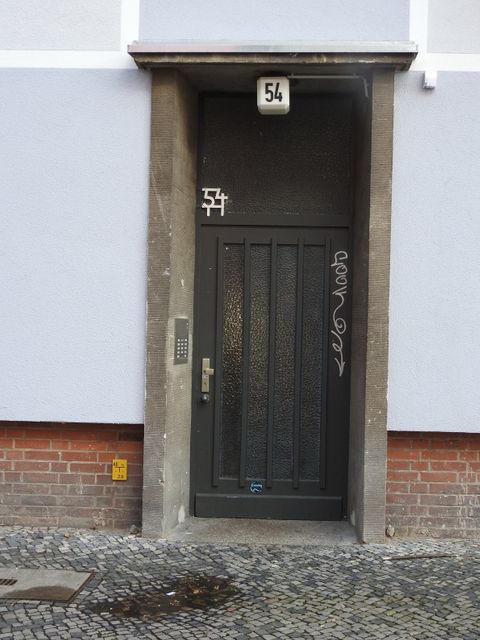 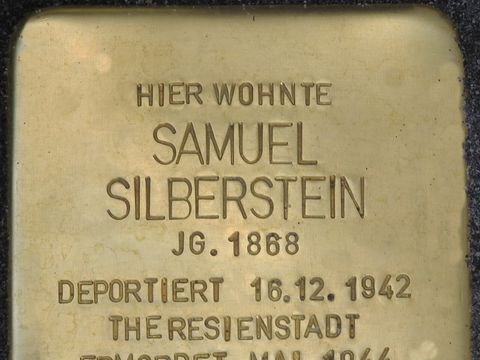 Englisch version of the biography

Samuel Silberstein was born in 1868 with the given name Schmul in Löbau/West Prussia. His parents were Wolf and Minna Silberstein. In 1896, at the age of 28, he married Ernestine Feibel. She was three years younger and came from a town nearby.
Their first son died soon after birth. Their daughter Meta was born 1898, followed by Hermann in 1899 and then Walter in 1901.
Löbau boasted an active Jewish community, but from the 1880s many Jewish families left the town in hope of a better life in a bigger city. This was also the reason why the Silbersteins left Löbau behind in the early 1900s and settled down 550 km further west in Berlin. The twins Bianka and Martin were born in Berlin in 1909.
The Silbersteins were liberal Jews; the children attended public schools and grew up in upper middle class prosperity. After changing homes several times within Berlin, the Silbersteins moved into a comfortable four-room apartment in Fritschestr. 54 in Charlottenburg. Samuel was self-employed as a textile merchant and had a shop on Fritzstraße in Charlottenburg. He was traveling a lot due to his profession, but he was passionate when it came to the education and career choices of his children. Back then, “Schmuhl” was used as a derogatory term and curse word against Jews; this is probably why Samuel took on this adaptation of his given name soon after arriving in Berlin.
The children described family life as harmonious and their childhood as happy and carefree. It is not known whether it was primarily due to the close family ties why Hermann and the twins continued to live in their family home even as adults.
At the beginning of 1933, the first big cloud cast over the family. Martin, who within a few years had built an impressive career with his own clothing company in Berlin’s fashion district, became unemployed as a direct result of the Nazi boycott of Jewish businesses. After that and the years that followed, as a Jew, he was unable to find a permanent position. Documents hint that it was likely also the reason why his father’s business declined significantly during the course of the 1930s.
On November 10, 1938, Samuel and his son Hermann experienced first hand the brutal terror against Jews during the formerly so-called
“Reichskristallnacht”. They were attacked by a mob in Hermann’s shop on Kronenstr. 56. Miraculously, Samuel got away unharmed, but Hermann barely survived. He suffered significant injuries to his head and, due to internal bleeding, lost his hearing permanently. The little that Samuel had been able to save from the inventories in the aftermath, whilst his son Hermann was recovering in hospital, was lost shortly afterwards. Hermann was forced to shut down his business, thereby also losing his livelihood.
This was probably the most decisive event in the history of the Silberstein family, which not only marked the transition from systematic discrimination and disenfranchisement to systematic annihilation; it also marked the beginning of a drastic social decline and the disruption of the Silberstein family. Hermann, Martin and Bianka managed to escape abroad in 1939/1940; Bianka found refuge in London, while Hermann and Martin escaped to the USA; Hermann via Shanghai. The lives of all three siblings remained difficult until the end, marked by the loss of the family, a lack of professional prospects and precarious financial situations also caused by considerable persecution related health problems.
Samuel and Ernestine remained in Germany – were they indecisive about fleeing, or were they lacking the financial means? The family’s former wealth had presumably shrunk considerably by that time, especially since Jews were increasingly deprived of funds through “Jewish property levies” etc. In the meantime, it had become almost impossible, especially for older people, to get an entry permit to another country. It is also unclear why Meta stayed in Berlin, but as the oldest of the children, she certainly felt responsible for her parents.
In 1941, Samuel and Ernestine were forced to move out of their home in Fritschestraße and to leave behind almost all of their remaining possessions. They were taken to the old people’s home on Grosse Hamburger Straße. With the start of the deportations to Theresienstadt in early June 1942, the building was converted into a collection point; the furniture was removed to accommodate as many people as possible. Instead of beds, there was only straw on the bare floor; the windows were barred.
It is unknown whether, and if so under what circumstances, there could have still been encounters between the parents and their daughter Meta. At the end of October 1942, Meta and her husband Bruno Pohle (see the stumbling stones at Bismarckstraße 108 in Charlottenburg) were deported to Riga. Samuel and Ernestine were to never see any of their children again. Almost two months later, on December 16, 1942, they were deported to Theresienstadt in one of the so-called “old age transports”. Ernestine died in August 1943; Samuel somehow managed to survive until May 1944. 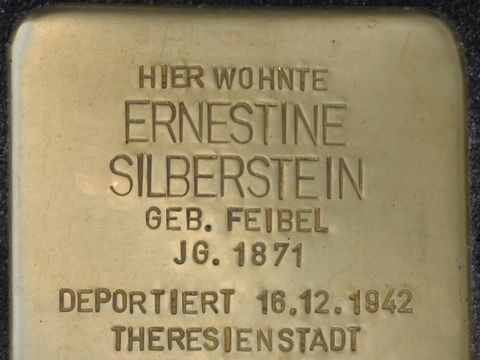 Ernestine Silberstein was born in Heinrichsdorf in West Prussia in 1871, as the daughter of Max and Minna Feibel née Cohn. As a young woman, Ernestine met Samuel Silberstein, who lived in the nearby town of Löbau. They married in 1896.
The first son, Siegbert, died of cot death. Their daughter, Meta was born in 1898, followed by their sons Hermann in 1899 and then Walter in 1901. The young family of five then moved to Berlin, like so many others, presumably in search of a better life.
At the age of 38, Ernestine gave birth to the twins Bianka and Martin on April 15th, 1909, a very special gift for the older sibling Meta, who was celebrating her 11th birthday that day. After moving several times within Berlin, the family finally settled at Fritschestr. 54, not long after the arrival of the twins. The mother was responsible for the upbringing of the children, since the father, an independent textile merchant, traveled a lot for work. Family life was described by the children as harmonious and close-knit; by now the Silbersteins had completely adjusted to their ways of life and, as liberal Jews, religion played only a minor role within the family.
Their son Walter died as a young man in 1926 from pneumonia; at that time he was in Frankfurt / Main – perhaps he was studying there?
Little is also known about Ernestine. Please see Samuel Silberstein’s short biography for more information on her life.
Ernestine died in August 1943 of an alleged “heart muscle degeneration” in Theresienstadt. Samuel survived the atrocious living conditions until 1944.
Ernestine had three siblings, who were sadly also murdered in the Shoah. Her brother, a veterinarian residing in Hamburg, died in Auschwitz and the two other siblings were shot by the Gestapo in their homeland near Culm-Weichsel. 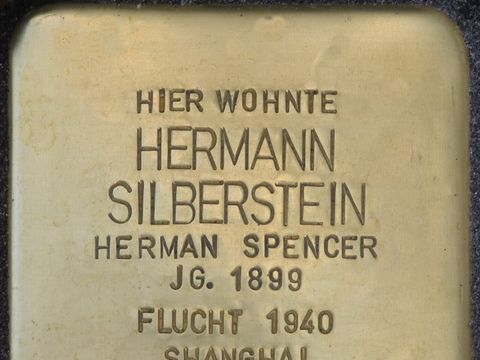 1 This is what also happened to his siblings Martin and Bianka, see their biographies. 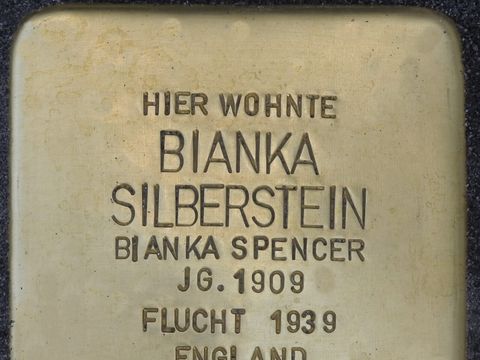 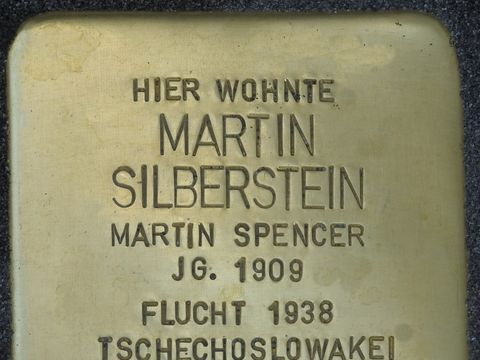 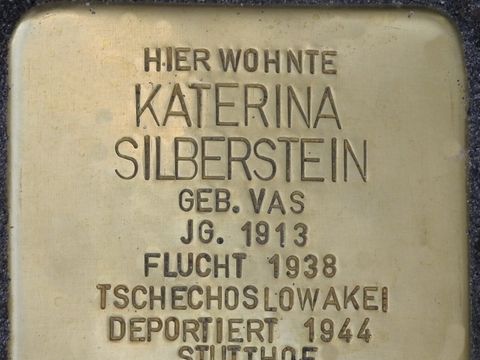