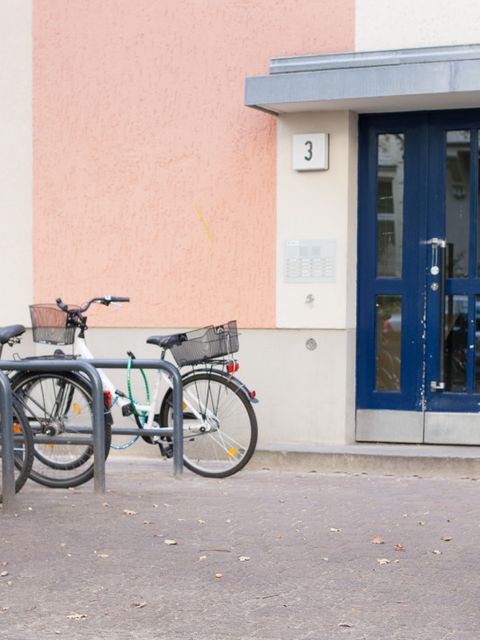 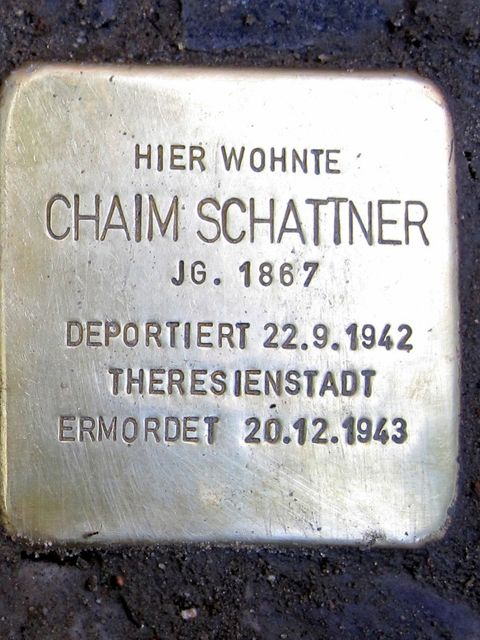 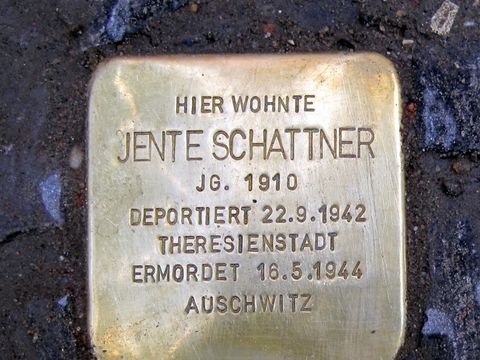 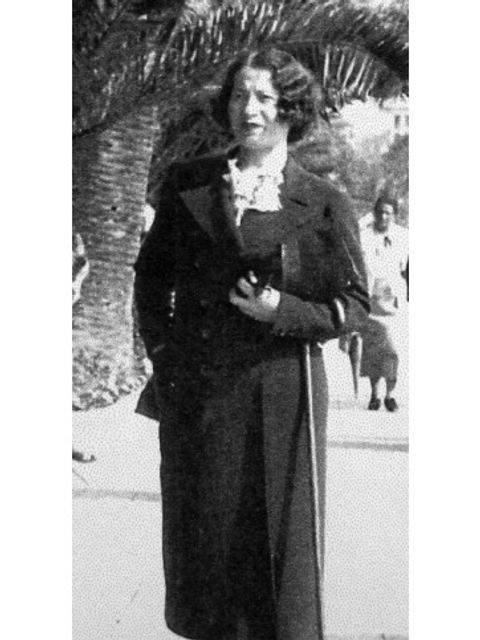 These two stumbling stones were donated by Howard Shattner, who lives in California, the grandson of Chaim Schattner and nephew of Jente Schattner. Howard’s wife, Anastasia, and Rabbi Walter Rothschild of Berlin, attended the installation which took place on June 19, 2012.

Chaim Schattner was an observant Jew who devoted his life to Jewish learning, customs, traditions, and prayer. Chaim was born on August 19, 1867 in Kuty, Poland. As a young man, sometime before his twenty-sixth birthday, he married Ester Sara Scheiner. Ester was born on February 25, 1872 in Zablotow, Poland. Resulting from this marriage were six children who were born in Zablotow: Yitzchak, Nuchim, Jakob, Berl, Meschulim and Jente.

The Schattner family lived in Zablotow until approximately 1914 when they relocated to Vienna. Chaim held religious services in his home, in addition to being involved in Jewish charitable work and commerce. In approximately 1927 the family relocated to Berlin where the Schattner brothers, except for Nuchim, who was living in Bobowa, Poland, established a property management company.

In October 1938, Nuchim, his wife, and two children, left Poland for New York.On October 28, 1938, one day after the start of a Nazi campaign which targeted Jews possessing Polish nationality, the remaining three brothers, Jakob, Berl, and Meschulim were arrested, and then deported to Poland. After a number of months they found their way to Antwerp, Belgium and then Marseille, France. On October 4, 1942 the brothers were admitted into Switzerland where they lived as refugees until October 1947 when, with the help of brother Nuchim, they emigrated to New York.
The fate of brother Yitzchak Schattner is uncertain, although it is believed he was killed somewhere in Poland.

After October 1938 Chaim Schattner, wife Ester, and daughter Jente were the only members of the Schattner family still living in Berlin. For the next four years they struggled to cope with the increasingly difficult conditions which were imposed on Jews living in Germany.

On August 31, 1942 Ester died of an illness. She was buried in Weissensee Jewish Cemetery where a tombstone, erected in 1947, marks her resting place. Less than three weeks later Chaim and Jente were arrested. On September 22, 1942 they, along with ninety-eight other Jews from Berlin, were forced onto transport 1/67 and deported to Theresienstadt ghetto. For the next fifteen months Jente did her best to care for her elderly father under the harshest conditions, nevertheless, Chaim died on December 20, 1943 at the age of seventy-six.

Jente Schattner was born in Zablotow, Poland on May 8, 1910. She contracted poliomyelitis as a child which caused a permanent weakness in her legs. After several operations she was able to walk again with the assistance of a cane. As the youngest child, and only daughter, Jente was adored by her parents and brothers.

Jente was a gifted musician who loved to play the piano. She often accompanied her brother Meschulim as he entertained family and friends, singing his favorite German songs. As far as we know, Jente never married.

On September 22, 1942 Jente and her father, Chaim, along with ninety-eight other Jews from Berlin, were forced onto transport 1/67 and deported to Theresienstadt ghetto. For the next fifteen months Jente did her best to care for her elderly father who, nevertheless, died on December 20, 1943. Five months later, on May 16, 1944, Jente was transferred to Auschwitz concentration camp where she was murdered at the age of thirty-four.