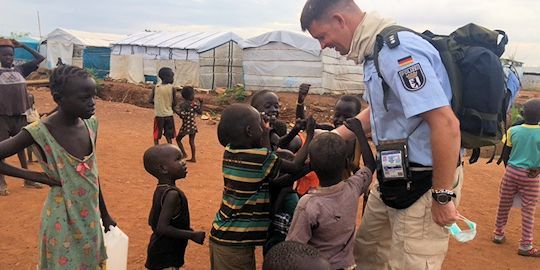 For more than 25 years, the Berlin Police has participated in various bilateral foreign missions, as well as missions of the United Nations (UN), the European Union (EU) and the Organisation for Security and Cooperation in Europe (OSCE), through secondment of personnel. To date, missions have been supported by more than 300 Berlin police officers. Currently, Berlin officers are deployed in the following missions abroad:

Afghanistan – German Police Project Team (GPPT)
Based on a bilateral agreement between the German and Afghan Ministries of the Interior, the German Police Project Team advises the Afghan security authorities. The officers deployed provide support in the training of Afghan police forces and implement bilateral police equipment assistance. The aim is to support the Afghan colleagues in their development into well-trained and equipped police forces that act according to the rule of law.

Georgia – European Union Monitoring Mission (EUMM)
Against the backdrop of the 2008 war in the Caucasus, the EUMM Mission aims to contribute to the restoration and monitoring of stability and, ultimately, to the normalisation of the situation. In addition, the EUMM mission members are responsible for observing and analysing the situation in Georgia and monitoring compliance with human rights and international humanitarian law.

European Border and Coast Guard Agency (FRONTEX)
Since 2016, Berlin Police officers have regularly supported the Joint Operations of the border management agency FRONTEX, at the external borders of Bulgaria, Greece and Italy. The officers are deployed as fingerprint or screening experts, escort officers or border surveillance officers, in order to monitor the external borders of the EU and to ensure that refugees encounter asylum procedures in accordance with the rule of law.