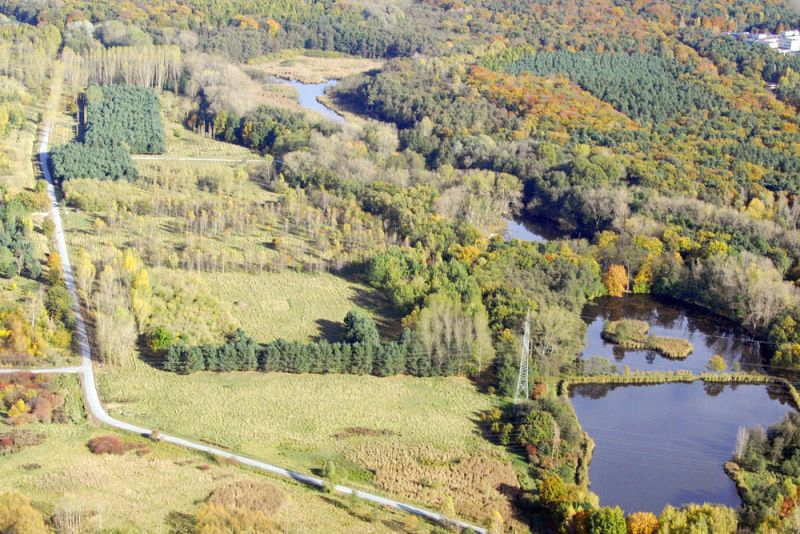 The group of contiguous lakes called "Bogenseekette" is an important part of the nature reserve.
Image: Forestry Department

In the last couple of years, large landscape zones within the “Naturpark Barnim” interstate nature park have been turned into nature reserves. Together with the Westbarnim Landscape Conservation Area (LCA) in Brandenburg, the Buch LCA forms a large and continuous landscape protection area. The Buch LCA covers an area of 870 hectares (2150 acres or 8.7 km²), and also contains the “Bogenseekette und Lietzengrabenniederung” nature reserve. A part of the nature reserve is in the Hobrechtswald, the “Bogensee” is located in the Buch Forest.

“Bogenseekette und Lietzengrabenniederung” nature reserve
This nature reserve consists of two separate parts, one of which is the “Liezengrabenniederung” to the west of the Buch Forest – a fen characterized by wetland meadows. Rare marsh birds and wetland fowl such as garganey, red-necked grebe and lapwings have established themselves in the newly developed expanses of water with reed belts and sedges. During migratory periods birds such as the crane use the wetlands as sleeping and breeding grounds. In dry periods sandpipers, such as the wood sandpiper and the common snipe, are attracted by the large mudflats that form due to the sinking water level.

The second part of the nature reserve is made up of the area around the “Bogenseekette” with reed belts, semi-natural forest in the north and the Buch woodland meadows. The “Bogenseekette” is an important spawning ground for amphibians, with over 2000 European toads migrating into the wetlands every year. The nature reserve also shelters numerous beetle species. A guidance system for small mammals and amphibians has also been installed, including several underpasses along the Schönlinder Chaussee road, so that the animals can migrate freely.

The Buch Forest forms the heart of the Buch Landscape Conservation Area and is made up of diverse, semi-natural, mixed woodland with waterlogged wooded areas and stands of oak and beech trees. Marsh marigold and iris grow on the moist meadows and in the patches of waterlogged forest. The only natural occurrence of the liverwort in the state of Berlin can be found in the old-growth forest. Woodpecker, tawny owl, bats and rare beetles live in the old beech and oak trees.