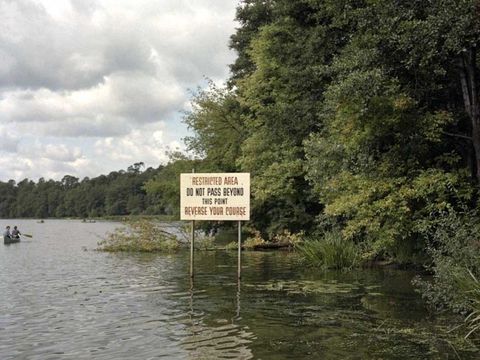 This section of the route begins at the Griebnitzsee S-Bahn station. Not far from here, at the Griebnitzsee/Kohlhasenbrück railway junction, two people were killed in an escape attempt that took place on 18 April 1962. The 19-year-old officer cadet Peter Böhme had deserted from National People’s Army anti-aircraft artillery training in Potsdam and was trying to escape to West Berlin with another cadet. In an exchange of fire with GDR border guards, Peter Böhme was fatally wounded. Private Jörgen Schmidtchen, who, as the border guard in charge, was trying to prevent the escape, was also killed. 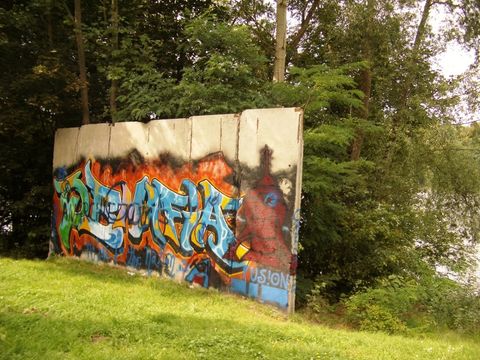 The border to the former West Berlin was in the middle of the lake Griebnitzsee; only a small section to the far west was the sole property of the GDR. The restricted area was along the lake’s southern shore, which the GDR had expropriated for the border installations. A section of the Wall is still standing on the shore of the Griebnitzsee; like all other remaining traces of the Wall, it is protected as a historical monument. Info markers recall Willi Marzahn, Peter Böhme, and Jörgen Schmidtchen here.

While GDR citizens had no access to the lake, the former border patrol road has become a popular place for a stroll since 1990. The old and new property owners are currently engaged in a bitter dispute over public access rights to the path. The Wall Trail leaves Babelsberg and crosses to the other side at the bridge Parkbrücke, where it follows Waldmüllerstrasse and Mövenstrasse to Königstrasse. 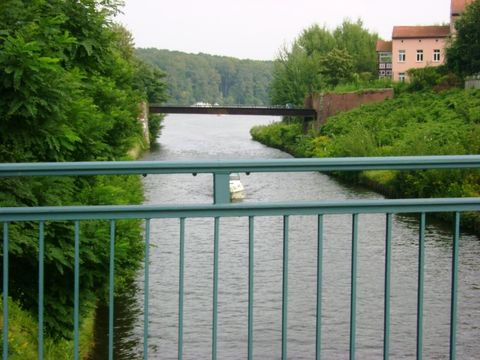 Between the bridge and Königstrasse, you will find yourself in the former GDR exclave Klein Glienicke, a butterfly-shaped settlement that was once enclosed by the Wall. A Berlin Wall Trail info board on Waldmüllerstrasse tells the story of this exclave. The adjacent palaces and gardens, as well the hill Böttcherberg, belonged to West Berlin. Klein Glienicke could only be reached from Babelsberg via the bridge Parkbrücke, which was under constant surveillance by GDR border guards. Because Klein Glienicke was located in the border area, which was governed by special security regulations, an annotation was added to the ID cards of the people who lived there and visitors were required to apply for a permit. These restrictions meant that young people in particular tended to move away from Klein Glienicke. Unoccupied houses were torn down, and in 1979 the chapel had to be closed. In July 1973 two families managed to escape to West Berlin through a tunnel they had dug from the basement of their house using only a child’s shovel and the blade of a spade. Because of the high water table, the “border protection atlas” had categorized their property as “unsuited to tunnel-building”; as a result, it was checked only sporadically. The fact that the water table drops considerably during hot spells had not occurred to the members of the GDR’s Ministry of State Security. Info markers dedicated to Horst Körner, Rolf Henniger, Norbert Wolscht, Rainer Gneiser, and Günter Wiedenhöft, all of whom died at the Wall, are also found on Waldmüllerstrasse. 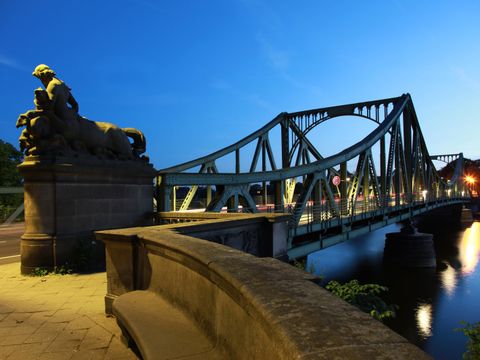 On Königstrasse you should continue west to Glienicke Bridge (Glienicker Brücke). As the “Potsdam border crossing,” it could be used after the Wall was built only by members of the Western Allies’ military liaison missions, private citizens with special permission, and later also by diplomats accredited in the GDR. Glienicke Bridge’s mystique as the “Bridge of Spies” came from the 1962 exchange of the KGB agent Rudolf Abel for the American pilot Francis Powers, who was shot down during a reconnaissance flight over the Soviet Union. Although similar exchanges took place only in 1985 and 1986, this border crossing continued to hold the public’s imagination. In 1989 Glienicke Bridge was one of two additional border crossings to be opened already on 10 November 1989, the day after the fall of the Wall.

From here you may want to make a quick trip to Villa Schöningen on the Potsdam side of Glienicke Bridge. Behind this villa on Schwanenallee, you will see info markers recalling Herbert Mende and Horst Plischke. Horst Plischke drowned on 19 November 1962 during his escape attempt. Herbert Mende was in the border area, but not trying to escape, when he was shot and wounded. He died of his injuries on 10 March 1968. 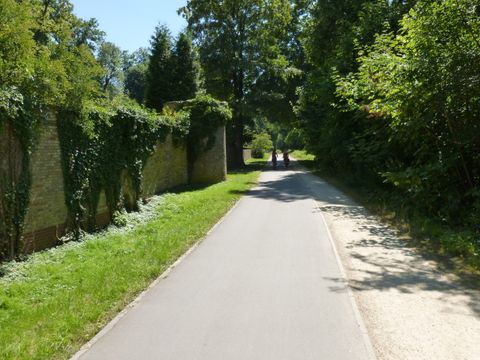 Between Glienicke Hunting Lodge (Jagdschloss Glienicke) and Kladow, the border ran along the middle of Glienicker Lanke and the Havel River, west of Peacock Island (Pfaueninsel). In addition to underwater barriers near the riverbank, the GDR leadership had barriers with two walls or fences, border strips, and watchtowers built on land, too. From Glienicke Bridge, the Wall Trail takes you from the eastern riverbank through the Klein Glienicke park to the Wannsee S-Bahn station. On the way, at Krughorn, you will see a Berlin Wall Trail info board that tells you more about the history of the church Heilandskirche in Sacrow. 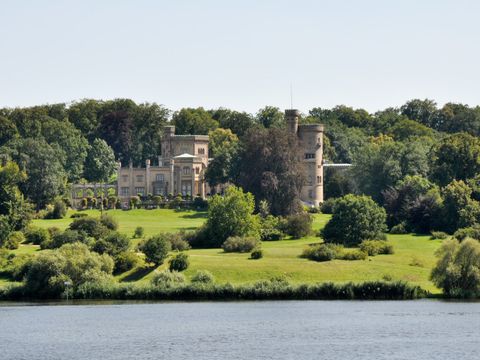 Starting in 1833, Karl Friedrich Schinkel designed and built Babelsberg Palace (Schloss Babelsberg) as an English neo-Gothic summer residence for the later Kaiser Wilhelm I; the work was continued by Ludwig Persius after Schinkel’s death in 1841. Babelsberg PalaceMore information 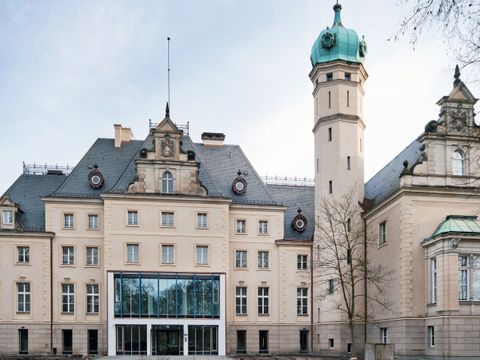 Glienicke Hunting Lodge (Jagdschloss Glienicke), built in 1682 for the Great Elector, had an eventful history, changing owners several times and becoming both a military hospital and a wallpaper factory before being purchased by Prince Carl von Preussen in 1859 as a summer residence for his son, Friedrich Karl. Glienicke Hunting LodgeMore information 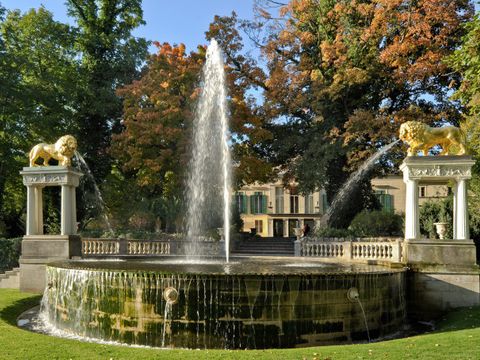 After the paved road between Berlin and Potsdam was built, Klein Glienicke, once the home of the steward of Glienicke Hunting Lodge, was transformed into Glienicke Palace (Schloss Glienicke) starting in 1791. Glienicke PalaceMore information 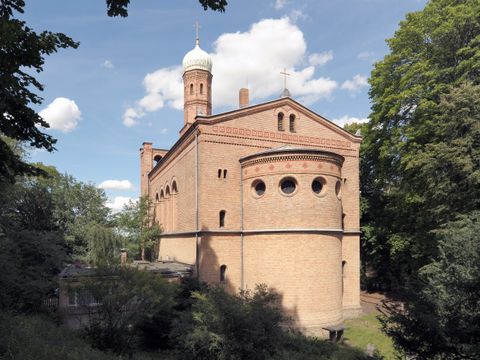 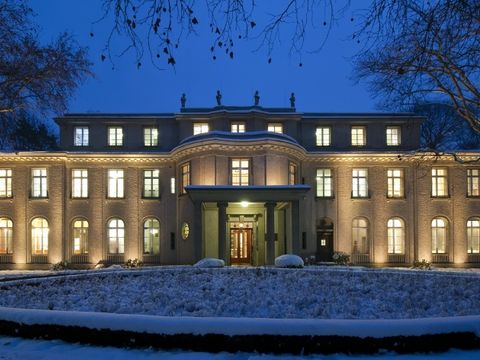 House of the Wannsee Conference

On 20 January 1942, top-ranking government officials in National Socialist Germany and the SS met at Villa Marlier on the lake Grosser Wannsee to plan the final annihilation of European Jews. House of the Wannsee ConferenceMore information 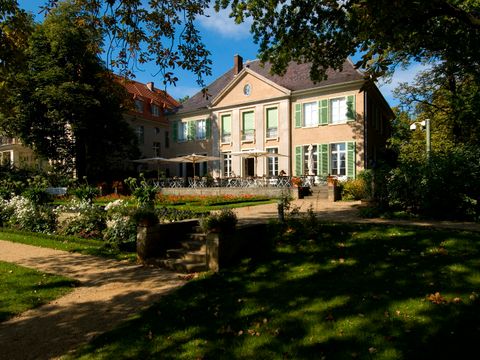 From 1909 to 1910, the painter Max Liebermann had a summer residence built on the lake Grosser Wannsee by Paul Baumgarten. Liebermann VillaMore information 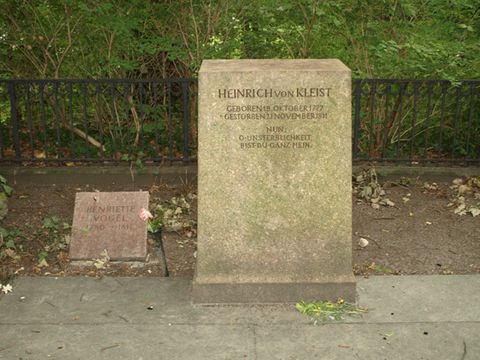 The grave of the German writer Heinrich von Kleist (1777–1811) is located on the lake Kleiner Wannsee. The National Socialists had the gravestone restored in 1936 while getting ready for the Olympic Games held in Berlin that year. Kleist’s graveMore information