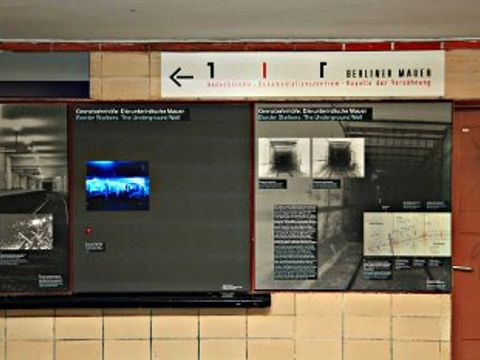 The exhibition at Nordbahnhof highlights the absurdity of the division, as demonstrated by the three U-Bahn and S-Bahn lines that ran under East Berlin to take passengers from one West Berlin station to another and, from 1961 to 1989, occupied a special position in the city’s otherwise divided public transportation network. The trains used on these lines (today’s U6 and U8 and the north-south S-Bahn line) no longer stopped at the deserted stations in East Berlin and could not be boarded there. Although passengers from West Berlin were used to the situation, passing through these stations under East Berlin was still a strange experience, which is why West Berliners referred to them as “ghost stations.” The trains traveled through them slowly without stopping, and armed guards could be seen on dimly lit platforms. Before the trains entered East Berlin, a warning would come over the U-Bahn loudspeaker: “Last stop in West Berlin!”

With its exploration of border stations and “ghost stations,” the exhibition spotlights the perfidious perfectionism that marked the SED’s (East Germany’s ruling party) actions in cementing the division of the city and preventing escapes. Taking the border underground as its theme, it addresses the same issues as the Berlin Wall Memorial’s outdoor exhibition: the city’s division, escape attempts, and life in the shadow of the border installations.

The exhibition presents five different perspectives on this theme:

The exhibition “Border stations and ‘ghost stations’ in divided Berlin,” which was the first element of the Berlin Wall Memorial’s outdoor exhibition on Bernauer Strasse to be completed, includes photos and stories that were previously unknown and reminds its visitors of individual fates that had been forgotten. A Berlin Wall History Mile info board in front of the station publicizes the exhibition inside.