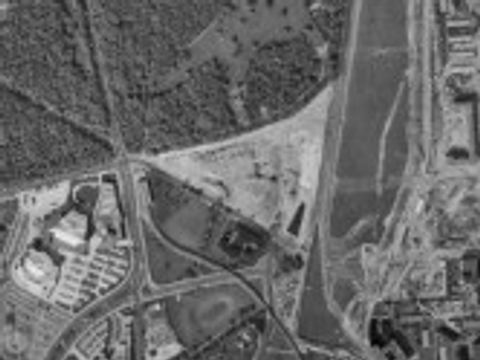 In 1988, the “Lenné-Dreieck,” around 4 hectares of land located between the Tiergarten park and Potsdamer Platz, became the third property to be exchanged between the GDR and the Berlin Senate. Bordered by Lennéstrasse, Bellevuestrasse, and Ebertstrasse, it had been part of the Mitte borough since the incorporation of Greater Berlin in 1920; like the rest of the borough, it belonged to the Soviet sector as of 1945. When the Wall went up in 1961, this triangular piece of land was cut off by the border installations; projecting into West Berlin, it was surrounded by a makeshift fence and left undeveloped. The exchange of territory agreed to on 31 March 1988 made it part of West Berlin’s Tiergarten borough as of 1 July 1988.

The Lenné-Dreieck attracted public attention outside Berlin, too, when it was occupied on 25 May 1988 by protestors opposed to the Senate’s plans for road construction here, once the territory had been formally exchanged. When the police came to clear the property on 1 July 1988, more than 180 of the squatters fled over the Wall to East Berlin, leaving the GDR a little later via the usual checkpoints.

The fall of the Wall and reunification put an end to plans for a divided highway here. Instead, the Lenné-Dreieck became part of the Urban Planning Ideas Competition for the Potsdamer Platz/Leipziger Platz area; today it is home to a mix of office, hotel, and residential spaces.