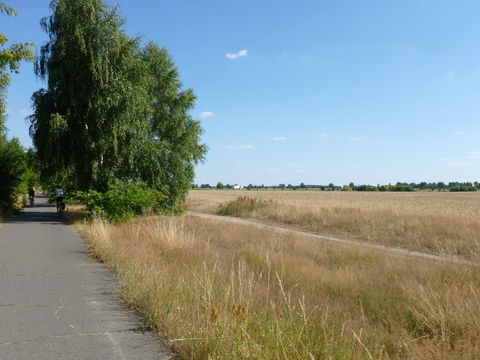 The route running from Lichtenrade to Lichterfelde is one of the most scenic along the Wall Trail, but there are very few traces of the GDR’s border installations still left along the way. The abrupt transition from the city’s edge to the open countryside, however, remains an obvious sign of the decades of forced division. Offering not only a peculiar contrast, this sight is actually an artifact of the GDR border regime. Shortly after Beethovenstrasse, the path turns to the north; after passing Hohenzollernstrasse and Prinzessinnenstrasse, you will turn west towards Schichauweg.

Traveling along the edge of the former wastewater treatment farm, you will approach the grounds of what was once the Parks Range “ghost town.” Until the early 1990s, the 110 hectares of this restricted area were used by the U.S. Army as a military training ground. Today there is nothing left of the streets and buildings that soldiers used to practice house-to-house combat. Plans now call for building apartment houses on the property, while citizens’ groups are working to have it maintained as a nature park. 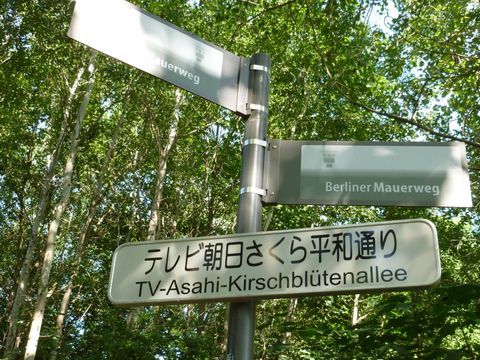 The route makes a sharp right-hand turn, and the longest of the cherry tree avenues commemorating German reunification in 1990 starts right behind it. The cherry trees and the plaque explaining the avenue were donated by Japanese citizens. In the same section of the route, near Gudrunstrasse, an info marker tells the story of an escape attempt by Hans-Jürgen Starrost, who was shot and seriously wounded by a local GDR police officer while being arrested outside the border strip. Four weeks later, he died of his injuries in a hospital in Potsdam.

At the end of the cherry tree avenue, the path along the former border installations is interrupted by the tracks of the Anhalter Bahn railroad and the S-Bahn. In contrast to the Dresdner Bahn tracks, we were able to build an underpass here for the Wall Trail. Behind the railroad tracks, the route follows Ahlener Weg and Holtheimer Weg to the Lichterfelde-Süd S-Bahn station.

About the route: From the Lichtenrade S-Bahn station, Hilbertstrasse and Mozartstrasse bring you to the Wall Trail, where this 12-kilometer tour begins. This section of the Wall Trail is on Brandenburg’s territory, which means that you will be cycling or hiking on the GDR side of the former border. The route makes no major detours from the original border strip. If you are making the trip with children or teenagers, you may want to take Diedersdorfer Weg to the 2,000-square-meter skating park at the Freizeitpark Marienfelde. Rest areas with tables and benches along the cherry tree avenue make an inviting place for a picnic. 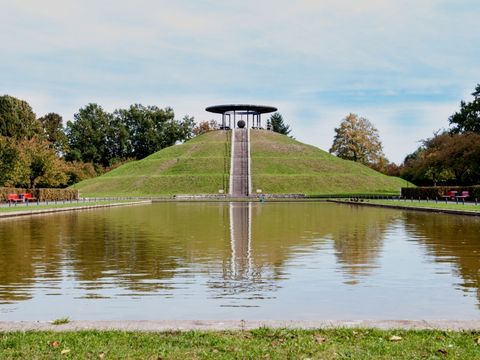 Mechanical engineer Otto Lilienthal (1848–1896) started building “flying machines” in 1874. In 1891 he managed to make the first successful gliding flights in history in Derwitz and the Rhinow region. Lilienthal memorialMore information