Remains of the Wall at the cemetery Invalidenfriedhof 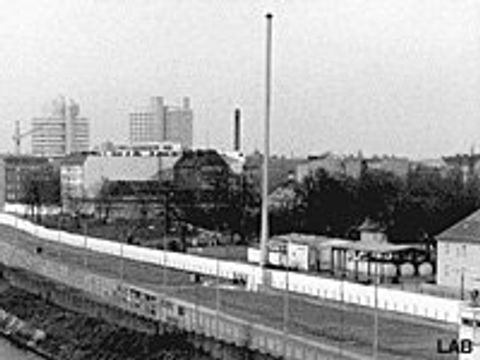 Between Kieler Eck and the nearby Invalidenstrasse checkpoint lies the Invalidenfriedhof, which was largely destroyed by the expansion of the border fortifications. The cemetery wall that bordered on the Spandauer Schifffahrtskanal served as an outer wall.

This cemetery on Scharnhorststrasse was laid out in 1748. Originally intended as a cemetery for the nearby Invalidenhaus, a hospital built for officers and soldiers disabled in military service, it was opened to generals after the war against Napoleon in 1813. Starting at the end of the 19th century, civilians could be buried there, too. After the Second World War, the cemetery – as a memorial to Prussian military history – was confiscated. The Allied Control Commission ordered the removal of all military and National Socialist monuments, including those in cemeteries. After the cemetery was closed in 1951, graves that had either been destroyed during the war or were no longer being maintained were razed.

After the city was divided, the border to West Berlin ran along the western bank of the Spandauer Schifffahrtskanal; the water itself was on East Berlin territory. The expansion of border fortifications that started in August 1961 transformed much of the cemetery into a “no man’s land.”

A long section of the inner wall, made of stacked concrete slabs, has been preserved with a few gaps. The border patrol road is still recognizable, as is the width of the former “no man’s land.”

Despite the destruction, the 200 remaining tombs and gravestones allow visitors a glimpse of the cemetery’s eventful history. An especially interesting artifact is the monument designed by Karl Friedrich Schinkel for Gerhard von Scharnhorst, a Prussian general and army reformer. The austere classicism of the tomb is crowned by a slumbering lion and decorated with inscriptions and a relief illustrating scenes from Scharnhorst’s life.

Linden trees again line the paths and the cemetery wall bordering the Spandauer Schifffahrtskanal has been restored to its historic appearance.