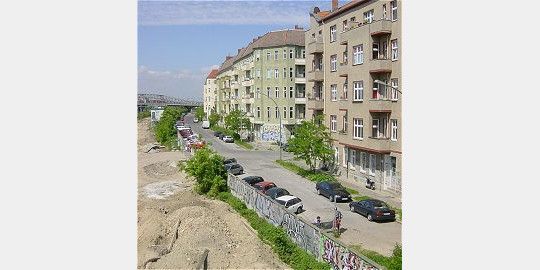 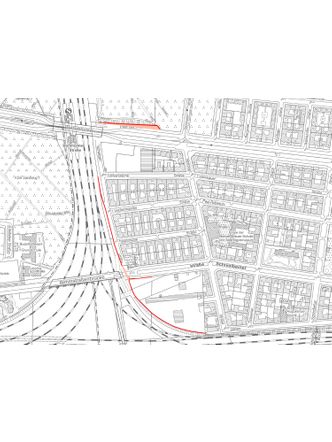 Wall monuments along the “Ulbricht curve”

Securing the border south of the former Bornholmer Straße border crossing around Nordkreuz was especially difficult due to the railway tracks and the S-Bahn line here. As a result, the border fortifications enclosed a wide area. Various sections of the walls built here are still standing on Norweger Straße and Behmstraße and were classified as historical monuments in 2005.

One section of the wall along Norweger Straße extends from Finnländische Straße to Behmstraße. This wall was originally built in 1900 to protect the railway installations, but was integrated into the border fortifications when the Berlin Wall was put up in 1961.

The slab wall that curves along the S-Bahn tracks between Behmstraße and Malmöer Straße is evidence of a particular episode in the history of the Berlin Wall and of public transportation in Berlin. Around Nordkreuz, the sector border ran directly along the railway embankment. The construction of the Wall on 13 August 1961 also severed the railway connections between Gesundbrunnen (west), Bornholmer Straße, and Pankow (both east). The Bornholmer Straße station was closed and a two-meter-high fence was put up between the tracks at Nordkreuz. That same month, the Ministry of Transportation approved plans to build new S-Bahn tracks between Pankow and Schönhauser Allee, which would be entirely on East Berlin territory. Known colloquially as the “Ulbricht curve,” this section of track was put into operation just a few months later, on 10 December 1961. The proximity of the “Ulbricht curve” to the border led to the construction of additional barriers in front of the actual border fortifications. This curved wall of concrete slabs now flanks the S-Bahn’s Line 8 on its way from Birkenwerder to Grünau / Zeuthen.