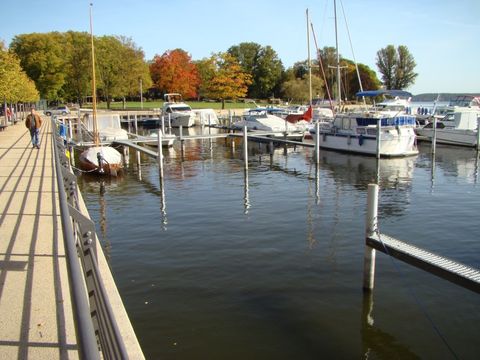 After crossing the lake Grosser Wannsee, the trail takes you southwest to the border between Berlin and Brandenburg. Here you have the chance to make a short trip to Sacrow to visit its small palace and the church Heilandskirche. 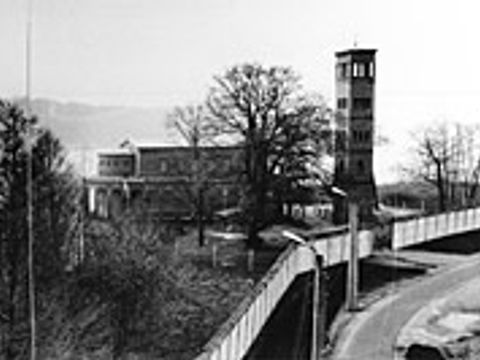 Border installations in front of the church Heilandskirche, no date

The border installations ran across the grounds of the church once the Wall was built. The bell tower was initially part of the Wall, while the nave of the church stood in the “no man’s land” between the political border in the Havel River and the “death strip.” Church services took place in the building until 24 December 1961, but when the interior was vandalized a little later, the border authorities used the damage as an excuse to prohibit further use. The building’s condition continued to deteriorate and, although the church was inaccessible from both Potsdam and Berlin, the façade was restored with the help of donations from West Berlin. The congregation and many visitors held the first church service after the fall of the Wall on 24 December 1989. The reconstruction of the interior took place from 1993 to 1995, and the gardens laid out by Peter Joseph Lenné and later destroyed by the border fortifications were also restored. 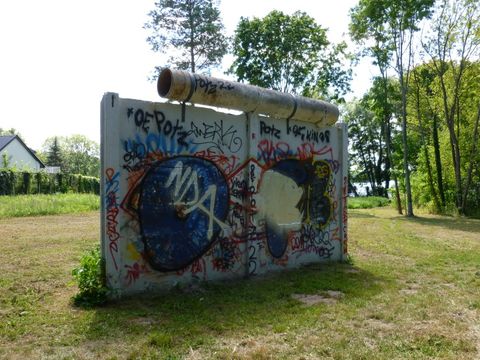 The trail itself takes you north over the hill Luisenberg, on the former territory of the GDR, towards the lake Gross-Glienicker See, which you pass on its western shore. The border ran through the middle of the lake – but despite the GDR border guards’ constant observation, this especially clean lake was popular with West Berliners who wanted to take a swim. You can see a section of the Wall from the fortifications on the GDR side at the northern end of the lake, on Gutsstrasse. There you will also see remnants of the old manor house Gross Glienicke, which was heavily damaged in World War II. The buildings still standing on this property were divided by the GDR border. 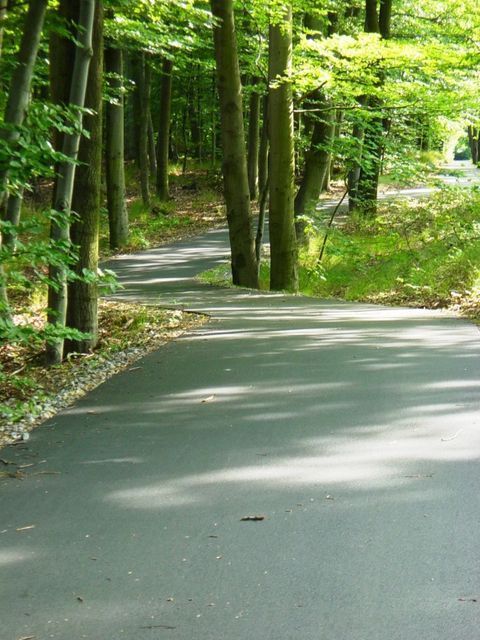 After crossing Ritterfelddamm, you continue along Privatstrasse to Potsdamer Chaussee, which marks the boundary to Brandenburg. Gatow Airfield lay in the triangle formed by the two major roads. It was opened in 1935 as a training venue for the German Luftwaffe, then under the command of the National Socialist aviation minister Göring. After World War II, this area belonging to Seeburg was made part of the British sector in exchange for West-Staaken, which was originally part of Spandau. During the blockade in 1948 and 1949, planes flying in the Berlin Air Lift took off and landed also at “Royal Air Force Station Gatow.” After the British left, the German armed forces took over the grounds and set up the Air Force Museum (Luftwaffenmuseum). 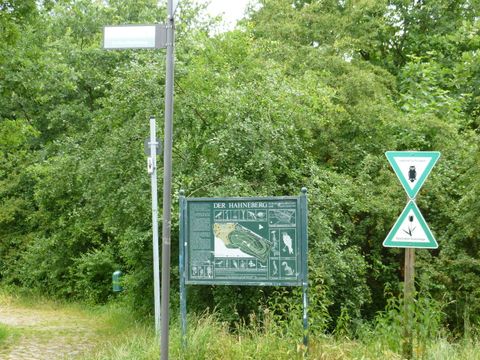 East of the former GDR border, the trail takes you through the wastewater treatment fields to Karolinenhöhe, where it makes a sharp turn to the northwest. Passing Fort Hahneberg, you approach the Staaken border crossing; the info board on Bergstrasse tells you more about it. In 1990 West-Staaken was returned to Berlin, and the former border crossing now lies almost two kilometers away from today’s border. 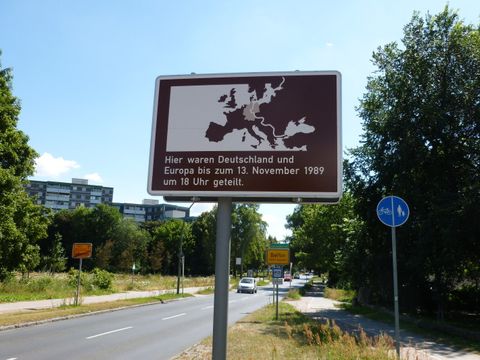 On Heerstrasse, near Bergstrasse, you will see a memorial that was created in cooperation between the Spandau borough and the organization Heimatkundliche Vereinigung Spandau 1954 e.V. A memorial event takes place there each year on the evening of August 12, the night before the Wall was built.

Following Bergstrasse will take you to the memorial for Dieter Wohlfahrt. A wooden cross and an info marker put up in 2011 recall this 20-year-old student who was shot on 9 December 1961 for trying to help GDR citizens escape. He was Austrian, but had lived in the GDR until 1956, and he was now one of a group of students helping people to leave East Berlin. On 9 December 1961, Wohlfahrt and his friends went to help a woman escape from West-Staaken by cutting through the wire fence bordering a quiet street on the outskirts of the city. The woman had already betrayed their plan, however: GDR border guards were waiting for the helpers and opened fire when they showed up. Dieter Wohlfahrt was shot in the heart and bled to death on the border strip. 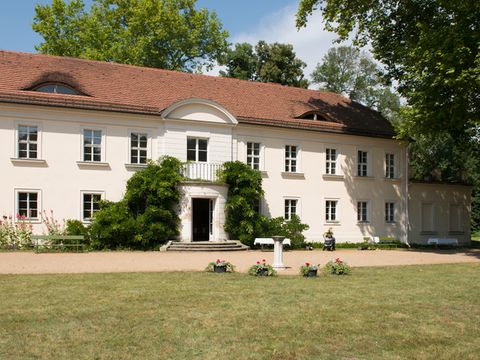 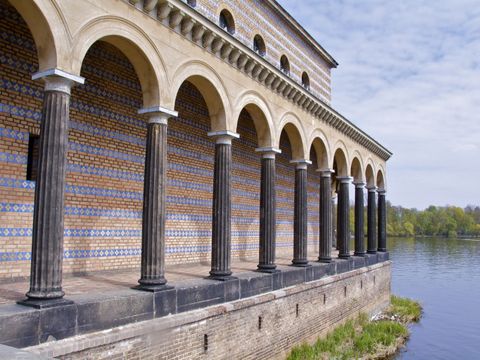 With its freestanding campanile, the church Heilandskirche is reminiscent of an early Christian basilica. It was built by Ludwig Persius from 1840 to 1844, based on sketches by Friedrich Wilhelm IV. In 1897, Adolf Slaby used the bell tower to install Germany’s first antenna system for wireless telegraphy. HeilandskircheWeitere Informationen 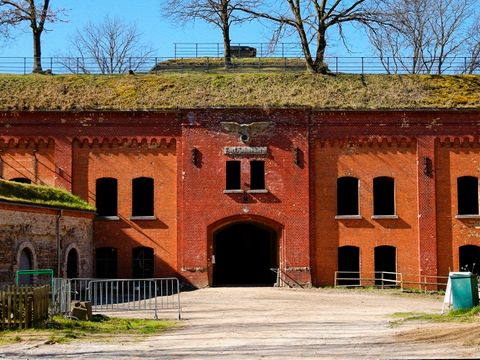 Fort Hahneberg was intended as protection for Spandau, its citadel, and its armament factories. Already outdated by the time it was completed in 1886, it was the only one of four planned forts to be finished. Fort HahnebergWeitere Informationen 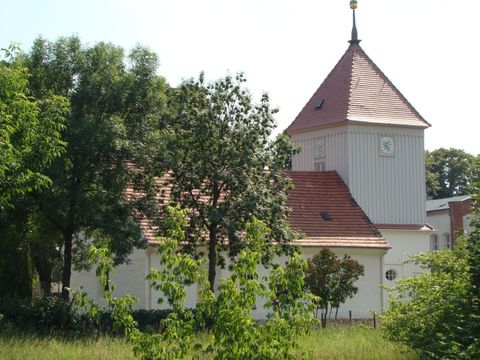