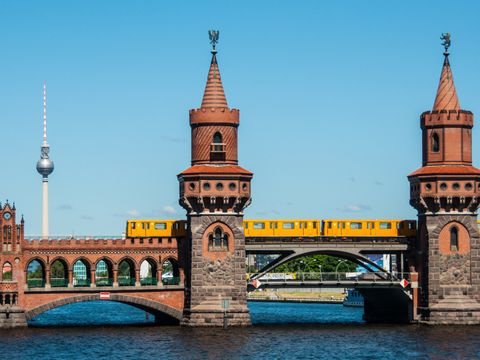 This route starts at the Warschauer Strasse S-Bahn and subway station and runs south across the bridge Oberbaumbrücke, where you can get a good look at the East Side Gallery, the city center’s longest remaining section of the Wall. From 1945 to 1990, the border to West Berlin ran along the opposite bank of the Spree River. A memorial at May-Ayim-Ufer (previously Gröbenufer) recalls the victims of the Wall who were killed accidentally here or shot by GDR border guards. 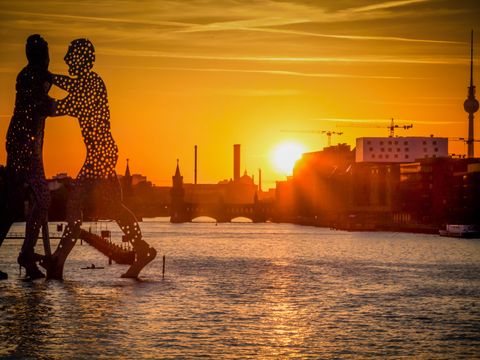 Not far from here a Berlin Wall History Mile info board shows pictures of the former border crossing. This border checkpoint ran across the Oberbaumbrücke and could only be used by pedestrians. A light installation in the western support of the bridge – “Stein-Papier-Schere” (Rock, Paper, Scissors) by the artist Thorsten Goldberg – marks the crossing but unfortunately can only be seen at night. Jonathan Borofsky’s “Molecule Men,” which symbolizes the meeting and growing together of the three boroughs Friedrichshain, Treptow (both former East Berlin), and Kreuzberg (former West Berlin), has a powerful effect, even from far away. At the foot of this sculpture is a former GDR waterway checkpoint. Built in 1962 and used by the GDR’s border police and customs authorities, this jetty is almost 500 meters long and has been classified as a historical monument. After a spectacular escape by 12 GDR citizens on the “Friedrich Wolf,” an excursion steamer, this checkpoint was supposed to prevent further “border breaches.” 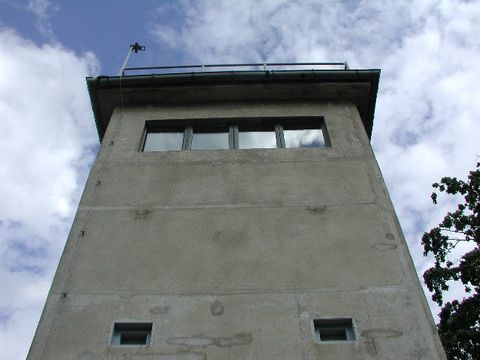 Following the elevated train line to Schlesisches Tor and then turning into Schlesische Strasse will take you to the former watchtower at Schlesischer Busch. Since restoration work was completed, this GDR border guard command post has been used by the “Kunstfabrik am Flutgraben” as an exhibition space. The organization “Grenzläufte e.V.” offers an interesting tour of the historical traces on, for instance, the roof of the Atelierhaus am Flutgraben. The former border strip has been redesigned as a park and marked with a memorial stone and Japanese cherry trees at Lohmühlenstrasse. 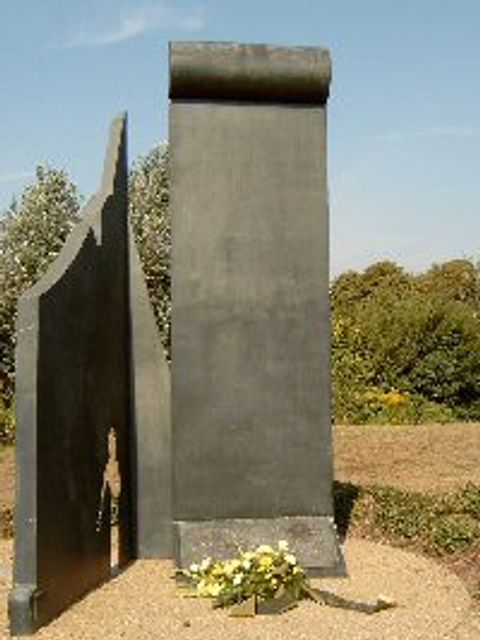 Memorial for the victims of the Wall in Treptow-Köpenick, Kiefholzstrasse

Between Treptow and Neukölln, the former border – marked on the ground with a double row of cobblestones – winds through a heavily built-up residential area. The Berlin Wall History Mile info board at the corner of Harzerstrasse and Bouchéstrasse gives you an idea of what the historical situation was like. At Elsenstrasse 40 and at Heidelberger Strasse 35/36, other info boards recall spectacular tunnel escapes. On the corner of Kiefholzstrasse and Karpfenteichstrasse, info boards recall six people who died along this section of the Berlin Wall: Heinz Jercha, Walter Hayn, Erich Kühn, Gerald Thiem, René Gross, and Manfred Mäder. From here you can take Karpfenteichstrasse to make a quick trip to the Soviet Memorial in Treptower Park. 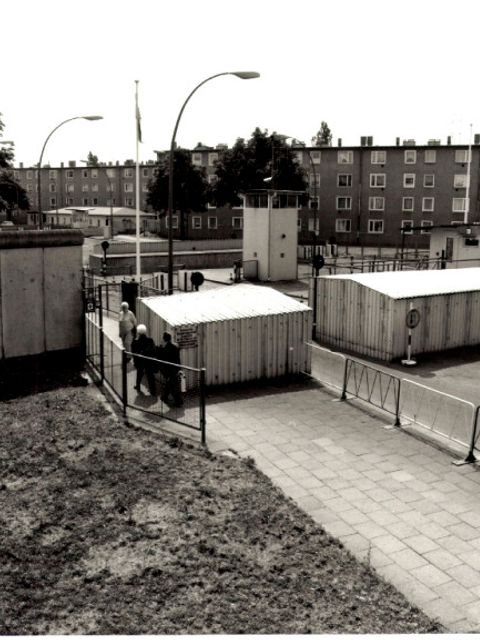 Kiefholzstrasse and the green space corridor Heidekampgraben, which was laid out along the old border installations, bring you closer to the former Sonnenallee border crossing. On the way you can make a stop at the memorial for victims of the Wall near the Fortuna allotment gardens in the Treptow borough. Fifteen people died during escape attempts along this section of the Wall alone, including two children – 10 and 13 years old – who were killed by GDR border guards on 14 March 1966. 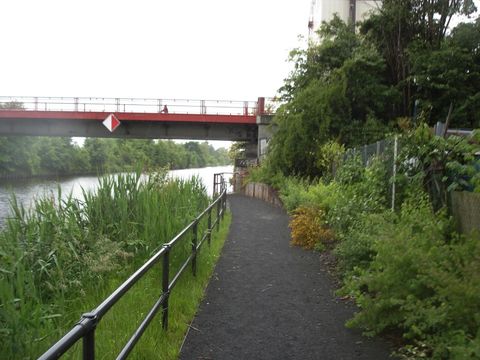 At the former Sonnenallee border crossing, which you may know from the book (and later film) of the same name by Thomas Brussig, you will find various references to the checkpoint: the art work “Übergang – Nähe und Distanz” (Crossing: Proximity and Distance) by Heike Ponwitz; a Berlin Wall History Mile info board; and a relief embedded in the ground by the artists Rüdiger Roehl and Jan Skuin. Continuing along Heidekampgraben, you reach the Britzer Zweigkanal, which is near the former Düker border checkpoint for ships. Crossing the bridge, which was not rebuilt until after German reunification, will take you to the memorial for Chris Gueffroy. A stele designed by the artist Karl Biedermann recalls this 20-year-old, who had heard that border guards were no longer shooting at people trying to get over the Wall. As a result, he and a friend decided to risk an attempt. Eight months before the Wall fell, he became the last person to be shot dead by border guards aiming to prevent an escape to West Berlin. From the memorial, the Wall Trail first takes you along the Britzer Zweigkanal, then along the Teltowkanal, which was the largest section of the 13-kilometer GDR border in the Treptow borough. At Rudower Hafen West you will leave the border and the Wall Trail and take Stubenrauchstrasse and Segelfliegerdamm to the Schöneweide S-Bahn station. 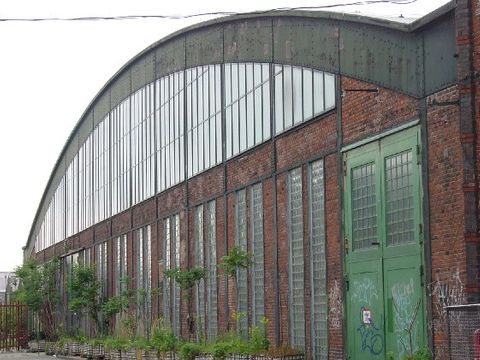 The Berliner Verkehrsbetriebe bus garage designed and built in 1927 by Franz Ahrens now houses the Arena, a venue for concerts, fashion shows, parties, and other events. ArenaMore information 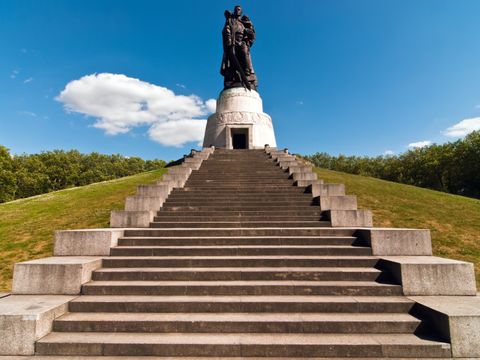 This Soviet war memorial (Sowjetisches Ehrenmal) in Treptower Park was laid out from 1947 to 1949 as a burial site for 5,000 Red Army soldiers. Soviet Memorial in TreptowMore information 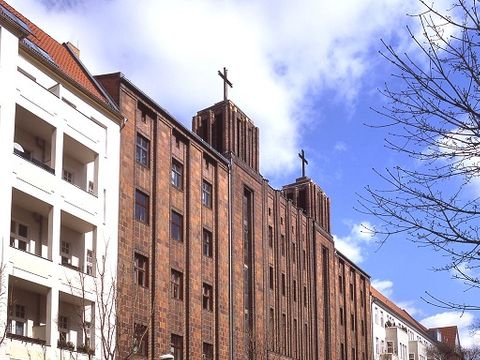 The Protestant church Bekenntniskirche was built from 1930 to 1931 according to plans by Curt Steinberg and in the style of New Objectivity. It was designed to be multifunctional: BekenntniskircheMore information