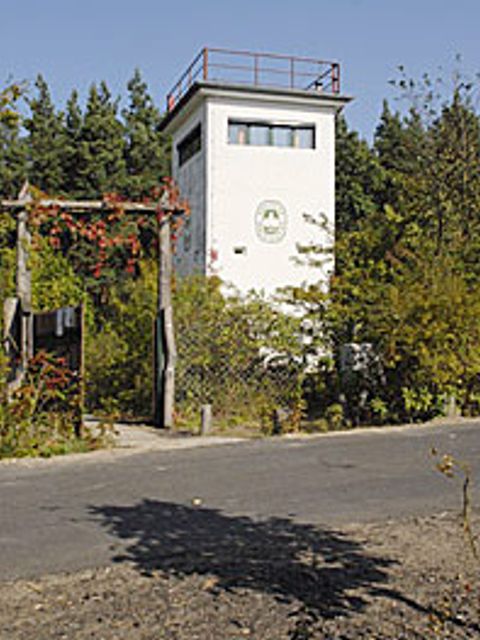 This route begins on Utestrasse; a GDR watchtower is nearby. It has been used by a youth organization, Deutsche Waldjugend, since 1990 as a base for its nature conservation work. Between Hohen Neuendorf and the Bergfelde neighborhood, the border ran parallel to Utestrasse from the northern end of Frohnau’s Invalidensiedlung right through the forest. As part of the GDR’s outer border, this section was closed as early as 1952 and developed into a multi-layered border installation with walls, fences, floodlights, and a border patrol road starting in 1961. The command post built in the 1980s was used to monitor the border and, at the same time, as a control center for other observation towers, which were spaced about 500 meters apart along the border strip. Each command post was occupied by three border guards and an officer, and also had a holding cell for any “border violators” who might be arrested. The 19-year-old East Berliner Joachim Mehr attempted to escape to West Berlin with his 23-year-old friend Hans-Jürgen K. near Bergfelde on 3 December 1964. Two border guards saw the two of them on the border strip and shot at them, killing Joachim Mehr. Hans-Jürgen K. was injured, but survived, while the border guards received medals and promotions. Info markers near the watchtower are dedicated to Joachim Mehr and two other victims of the Wall, Rolf-Dieter Kabelitz and Willi Born.

While riding or walking around the lake Hubertussee you will pass the Bieselfliess, a small river. Its course was rerouted to make way for the border installations; it was returned to its natural bed only at the beginning of the 1990s. The route takes you through a thickly wooded section and then continues on Oranienburger Chaussee. At the intersection of Oranienburger Chausee and Edelhofdamm you will see the memorial for Herbert Bauer and Michael Bittner. Every year on August 13, representatives from the borough of Reinickendorf (former West Berlin) and Glienicke (former GDR) meet here for a memorial event. Herbert Bauer was a West Berlin police officer who was shot in the line of duty by a Soviet soldier during an armed conflict on 25 December 1952. Long before the Wall was built, he became a victim of the division of Berlin. He was the only person to die during this period who is still remembered along the course of the old border. On 24 November 1986, Michael Bittner attempted to escape across the Wall to West Berlin at Nohlstrasse, after submitting a number of unsuccessful applications for an exit visa. He grazed the signal fence on the border strip, triggering the alarm and attracting the attention of two GDR border guards, who killed him with several shots. You will find more information on Michael Bittner and Friedhelm Ehrlich at the corner of Oranienburger Chaussee and Nohlstrasse. 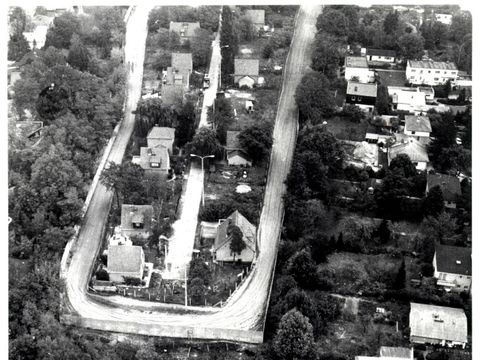 The first of several tunnel escapes took place not far from here on 24 January 1962. An info marker in front of the house on Ottostrasse where the tunnel originated tells the story of this successful attempt. Because the border had been sealed off everywhere since 13 August 1961 and more than ten people had already been killed at the Berlin Wall, potential escapees and their helpers turned to the laborious work of building underground tunnels. At Oranienburger Chaussee 13, 28 people managed to escape through a tunnel built from the basement of the house. Four houses away, another underground escape route enabled seven men and four women – most of whom were between 70 and 80 years old – to reach West Berlin in early May of 1962. Further to the south, you will pass the street Am Sandkrug, whose properties projected into Frohnau (West Berlin) from Glienicke (GDR) in the form of a “duck’s beak” (Entenschnabel). Because of its special situation, visitors, tradesmen, doctors, and delivery trucks were only permitted to enter the street with a special permit. After the Quadripartite Agreement on Berlin, the GDR government and the Senate, West Berlin’s government, started talks in 1971 on an exchange of territory. Smoothing out the border at the enclave “Entenschnabel” in order to use Oranienburger Chaussee as a West Berlin access road to a new border crossing was one of the possibilities considered. When the GDR government offered what became the Stolpe border crossing on Zerndorfer Weg, the West Berlin Senate lost interest in an exchange involving the “Entenschnabel.”