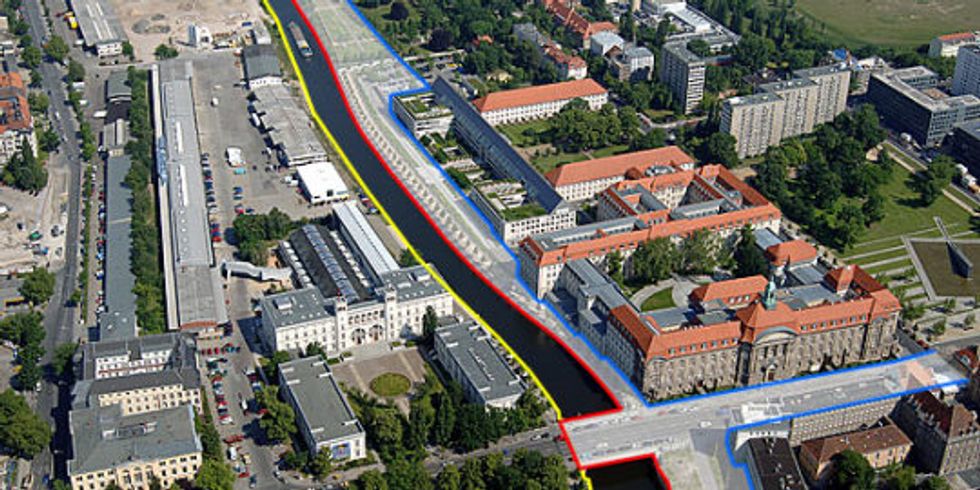 Along the Spandauer Schifffahrtskanal in the Mitte borough, the political border (in yellow) deviated from the location of the outer wall (in red). Since the bank of the canal was the actual border, GDR border troops set up both the outer and inner (in blue) walls, as well as the “no man’s land” between them, on the eastern bank of the canal and leveled the Invalidenfriedhof cemetery (center, top).

The border’s actual location was a matter of life and death for fugitives, since the entire area of the Spandauer Schifffahrtskanal and the adjacent harbor Humboldthafen to the south (not in the photo) belonged to East Berlin. The fugitive Günter Litfin was killed here in 1961 as he attempted to escape the bullets of the GDR transport police by jumping into the harbor. In the years to come, five other people died in the waters along the border at Humboldthafen and the Spandauer Schiffahrtskanal.

Until 1990, the border crossing at Invalidenstrasse (bottom right) extended one block to the east into Invalidenstrasse and over the bridge Sandkrugbrücke. When the Invalidenpark was restored as a public park, the sculpture fountain “Sinkende Mauer” (Sinking Wall) by Christophe Girot (far right) was installed here. Above the park you can see the former Stadium of World Youth.