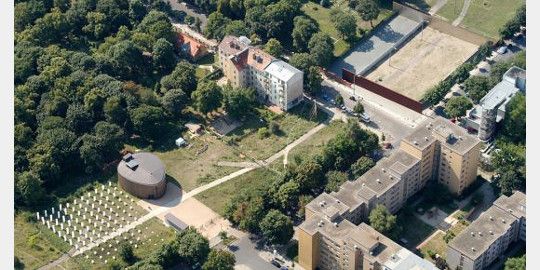 Bernauer Straße became especially symbolic of the inhumanity of the Berlin Wall. Because of the way the border was drawn in this area – the houses on the southern side of the street were in the Soviet sector, while the sidewalks in front of them belonged to the French sector – the Wall had an especially dramatic impact here. When the border troops started walling up the windows on the ground floor of these houses in August 1961, people attempted to escape to the western part of the city through the windows on the upper floors. Pictures of these escape attempts were seen around the world. Later the tenants living on this side of the street were evicted, and the houses were torn down in 1965. Only the ground floor façades remained; these were used as part of the border wall until 1979. 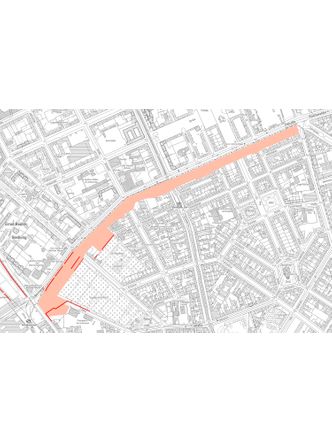 Bernauer Straße is the only place in Berlin where visitors can still see a section of the border fortifications with all the various installations and barriers: the Hinterland and border walls (inner and outer walls), “no man’s land,” sentry path, and floodlights. This property was originally part of the cemetery of the Church of St. Sophia, but when the Wall was built in 1961 the graves near the border were relocated. A 212-meter-long section of the border strip between Ackerstraße and Bergstraße was given protected status on 2 October 1990 in recognition of its historical significance.

As a response to the especially vehement protests against preserving this section of the Wall and because the German Historical Museum wanted to set up an educational historical facility here, an artistic and landscape architectural competition for a Wall memorial was held in 1994. The winning design submitted by the Stuttgart architects Kohlhoff & Kohlhoff used two six-meter-high steel walls to bracket off 64 meters of the protected border installation for the memorial. The outside surfaces of the steel walls are corroded, inspiring memories of the “Iron Curtain” metaphor, while the inside walls are made of polished stainless steel. This section of the border strip is thus reflected into infinity in the steel surface as a symbolic representation of the former extent of the border fortifications.
Souvenir-seekers had chipped off the concrete of the border wall (the “Grenzmauer 75” version) on Bernauer Straße down to its steel supports. In contrast to the Wall segment on Niederkirchnerstraße, however, where the damage was preserved as the most recent phase in the Wall’s evolution, the concrete sections around the Bernauer Straße memorial were restored to their original condition.

South of the memorial, on the grounds of the cemetery Sophienfriedhof, is a fairly long section of the slab wall that was part of the “perimeter defenses”; it was listed as a historical monument in 2001. Areas not offering a clear view of the land anterior to the actual border strip were secured by barriers of various kinds, intended to slow down would-be fugitives. Along with slab walls, these included fences, lighting equipment, barred windows, and vehicle barriers in the form of flower containers. 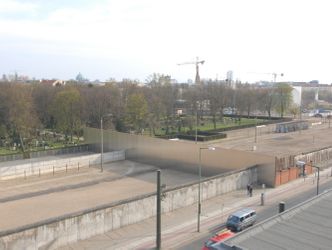 The memorial opened on 9 November 1999 and is just one part of a commemorative ensemble that also includes the Berlin Wall Documentation Center across the street and the adjacent Chapel of Reconciliation. This chapel, consecrated in 2000, both replaces and memorializes the demolished Church of Reconciliation. Built in 1894 on what later became the “no man’s land” of the border, making it inaccessible to its congregation, the Church of Reconciliation was detonated in 1985. The property was returned to the congregation in 1995 after the fall of the Wall under the condition of religious use, and a new chapel, designed by the Berlin architects Peter Sassenroth and Rudolf Reitermann, was built on the foundations of the sanctuary of the former church. In the Chapel of Reconciliation, the old Church of Reconciliation lives on not only in name but also in substance: tiny pieces of the demolished church were mixed into the compressed clay of the chapel’s interior walls. The oval heart of the chapel is enclosed in a translucent façade of wooden slats.

Behind the chapel is the cemetery of St. Elizabeth’s. Because of its proximity to the border, access to the graves of loved ones was limited after 1961 to family members holding special “cemetery permits.” Two sections of a slab wall that was part of the “perimeter defenses” are still standing on the side of the cemetery facing Bernauer Straße. These remains of the Wall were given protected status in 2001.