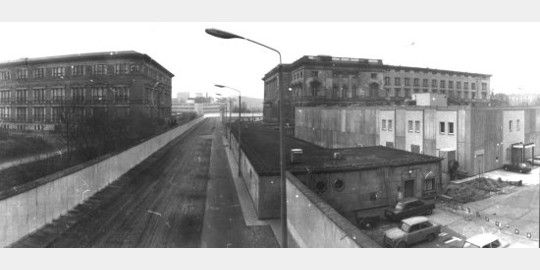 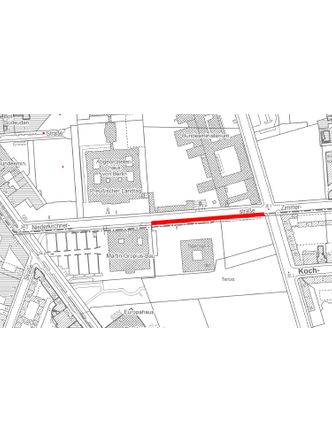 From 1961 to 1989, Berlin Wall border installations ran from Stresemannstraße through Niederkirchnerstraße in the direction of Checkpoint Charlie. A roughly 200-meter-long strip of the border wall (outer wall) (the “Grenzmauer 75” model), severely damaged by souvenir-seekers, is still standing at its original location on the southern side of Niederkirchnerstraße.

The “Grenzmauer 75” was the “fourth generation” of the Berlin Wall and – as the name indicates – began replacing earlier versions in the mid-1970s. The product of a large-scale development and testing program, it was made of L-shaped sections of pre-cast concrete used by farmers to build open silos. Each section was 3.60 meters high and 1.20 meters wide and was topped off by a smooth asbestos-concrete pipe 40 centimeters in diameter. Its “advantage” over its predecessor was its base, which could be set up on firm soil of any kind without a foundation, the robust construction enabling it to resist almost any attempt to smash through it with a vehicle, and the clean lines and uniform appearance it presented to the west. 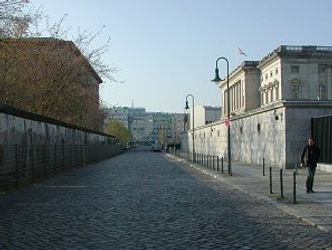 The 1990 decision to classify the Niederkirchnerstraße section of the Wall as a historical monument aroused great controversy. Public opinion was expressed at the time by the slogan “The Wall has to go!” The Wall segments here are marked by deep gashes and even holes left by the souvenir-seekers and -sellers who chipped away at the concrete in the days and weeks after the border was opened, often down to its steel supports. In this condition it documents both the course and the development of the inner-city border installations, as well as the way these were conquered and reclaimed.

Niederkirchnerstraße figured prominently in twentieth-century German history. Buildings and other traces here of the Third Reich and the GDR illustrate the century’s political developments and upheavals. From 1933 to 1945, key centers of National Socialist power were housed on Niederkirchnerstraße in close proximity to the historic government district. At the eastern end of the street – on the grounds of today’s “Topography of Terror” – the Gestapo set up its headquarters and notorious prison in the Prince Albrecht Palace that dated back to 1739, joined by the newly created Reich Security Main Office. The neighboring Prince Albrecht Hotel served as the seat of the SS High Command. The Gestapo headquarters was destroyed in the war, and the exposed foundations of the building are home to the exhibition “Topography of Terror”; it documents the history of this site as the place where the Nazi regime planned and organized campaigns that spread terror all over Europe.

On the other side of the street lies the Reich Ministry of Aviation designed by Hans Sagebiel in the mid-1930s. Largely unscathed by the war, the building was used by the GDR government as its House of Ministries, a phase documented by Max Lingner’s mural made of ceramic tiles from Meissen. This was where GDR head of state Walter Ulbricht insisted in June 1961, two months before construction of the Berlin Wall began, that “no one has any intention of building a wall.” Today the building is home to the Federal Ministry of Finance. Close by is the former home of the Prussian State Parliament, built at the end of the 19th century, which served as an “aviators’ house” during the Third Reich. Severely damaged in the war, the building was restored and given to the GDR’s Academy of Sciences. The Berlin House of Representatives moved into this historic building after reunification.