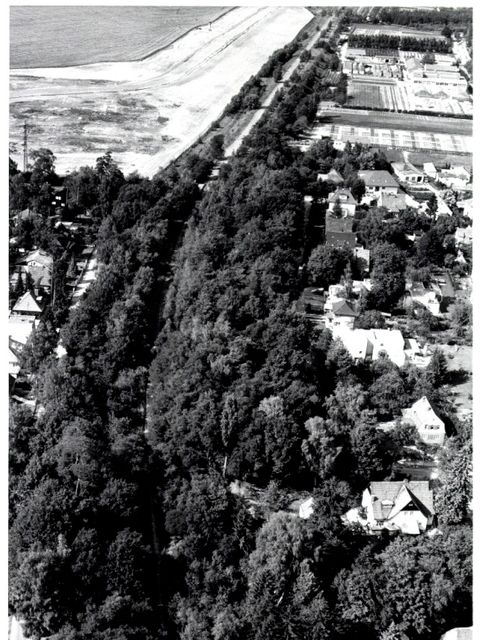 A 10-kilometer bike ride along a varied scenic route from Hennigsdorf to Hohen Neuendorf will bring you to the last border crossing to go into operation – shortly before the fall of the Berlin Wall – near Stolpe. In order to reduce the traffic load on the F5 (or B5) highway, which was no longer able to accommodate the rising traffic between Hamburg and West Berlin, the GDR built an expressway (today’s A111) from 1981 to 1982 that was paid for by West Germany. The Stolpe border crossing opened in 1982, but originally served only travelers driving from West Berlin to Scandinavia. It was also possible to enter the GDR (even for pedestrians using a shuttle bus service to the border) at Stolpe. Traffic to Hamburg, however, continued to be routed through the old Staaken border crossing on Spandau’s Heerstrasse. Construction of the West Berlin feeder road through Tegel Forest was delayed: citizens’ groups were worried about damage to the environment and had filed suit against the clearing of woodland. From the former border crossing you cycle along the edge of Tegel Forest and the golf course Stolper Heide and through the “Invalidensiedlung,” a settlement built for disabled veterans of World War I, to Hohen Neuendorf in Brandenburg. 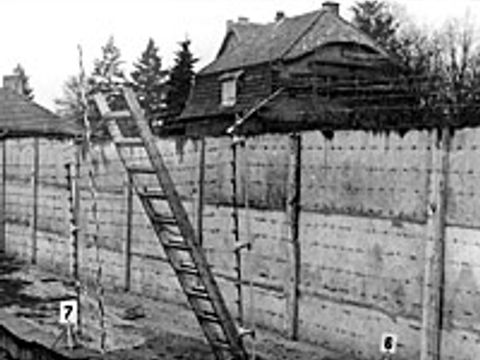 Reconstruction of escape on Florastrasse, no date (1980)

There 18-year-old Marienetta Jirkowsky, her fiancé, and a friend tried to escape to West Berlin from a vacant property on Florastrasse in the middle of the night on 21 November 1980. Ladders they had found nearby helped them to make it over the inner wall (“Hinterlandmauer”) and the signal fence, but by the time they reached the border patrol road they were spotted by GDR border guards. After calling out and firing warning shots, several guards opened fire. They fired 27 shots, hitting Marinetta Jirkowsky in the stomach in front of the outer wall. She died of her injuries the next day. Marinetta Jirkowsky was one of the few women to attempt an escape across the Berlin Wall. The two men made it to West Berlin, where they were contacted by so-called “unofficial collaborators” on behalf of the GDR’s Ministry for State Security (Stasi), who warned them against making the story public. One of these “unofficial collaborators” later removed the cross that her friends had put up in Frohnau in memory of the young woman. The 20-year-old border guard in charge that night, who was responsible for the killing, was sentenced in 1995 to a year and three months in a juvenile prison for second-degree manslaughter; the sentence was suspended. (The photo shown here was taken during the Stasi’s reconstruction of the escape attempt.). A Berlin Wall Trail info marker on Florastrasse recalls the young woman’s failed attempt.

The National Socialist military building authority was in charge of the 1937 construction of the “Invalidensiedlung,” a housing estate built for disabled veterans of World War I. InvalidensiedlungMore information