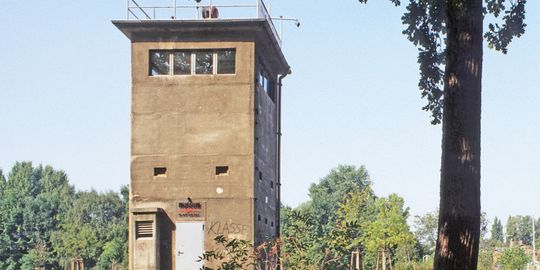 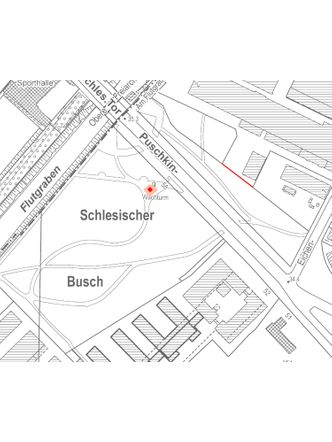 The watchtower of the former Schlesischer Busch command post stands today in Schlesischer Park, between the boroughs of Kreuzberg and Treptow on Puschkinallee, as though it were nothing but a lookout tower for visitors. Only its rifle hatches and the searchlight on the roof, accessible from below, testify to its former role as a key part of the border regime.

This command post, around 10 meters high and 4.2 by 4.2 meters wide, was responsible for 18 watchtowers and the electronic security devices in this section of the border. The square-shaped tower was made of pre-cast concrete components and had four floors. In construction and function, it can be compared to the Kieler Eck command post, also a listed historical monument. The base of the tower was underground and contained technical equipment and cables, as well as telephone lines connecting it to the surrounding observation towers. The entrance was on the ground floor, as were a WC and a holding cell. The floor above that was the staff room for the commanding officer and three guards. The top floor was the actual observation post, with large panorama windows on all four sides, an electric control panel used to monitor the border, and the lever that controlled the searchlight on the roof. Trapdoors and steep iron stairs connected the various floors. The hatches in the walls of the middle floor, which could be closed with iron flaps, indicate that the watchtowers had not been built especially for use on the inner-German border: since this floor was only the staff room, the hatches had no actual function. One explanation given for their existence is that these command posts were based on a design developed for watchtowers on the Soviet-Chinese border. Another explanation is that the hatches were intended to make the watchtowers look especially well-defended.

We owe the continued existence of the watchtower and its equipment to the former Museum of Forbidden Art (Museum der Verbotenen Kunst), which started working to preserve the tower even before the border regime was officially abandoned on 1 July 1990. Classified as a historical monument in 1992, the tower was painstakingly restored in 2004 in keeping with its landmark status. The conservation measures financed by the Federal Employment Agency, the federal state of Berlin, and the Treptow-Köpenick Borough Office were not aimed at returning it to its original state as a new building, but at preserving what had evolved over the course of decades and at preventing further decay. Damage caused by vandalism and graffiti was repaired, exposed supporting structures were renovated, cracks in the concrete surface were filled in, and the existing machine-applied plaster was touched up with authentic material. The interior was repainted in the color it was before the fall of the Wall. Today the neighboring Flutgraben e.V. association shows a permanent exhibition here on the history of the site, as well as changing art exhibitions.

North of Puschkinallee you can also see a slab wall from the former border, now covered with graffiti. This wall consisting of concrete slabs between H-shaped reinforced concrete supports was used as a perimeter defense in front of the actual border installations. This slab wall has been listed as a historical monument since 2005 and is still used to mark the boundary of the industrial premises next to it.