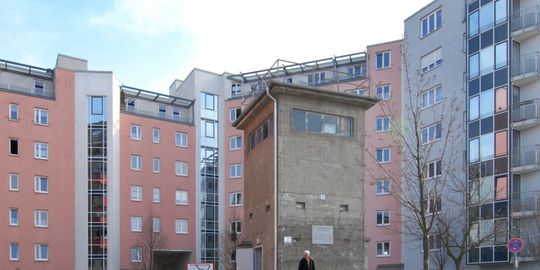 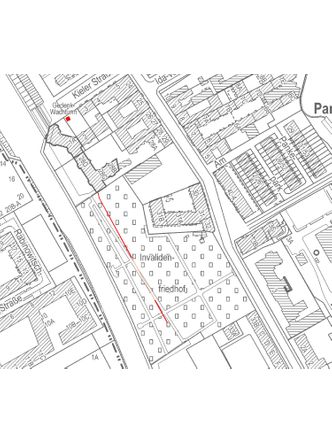 The watchtower of the former Kieler Eck command post, surrounded and overshadowed by apartment houses from the 1990s, stands on the bank of the Spandauer Schifffahrtskanal. As a reminder of the inner-city border, it bears witness both to its fall and to the rapid pace of new development along the old border strip. The buildings that went up right next to the old border after reunification block the watchtower’s view of the remains of the border fortifications it was intended to help secure, such as the Hinterland wall (inner wall) still standing at the cemetery Invalidenfriedhof to the south.

Of the 302 watchtowers and observation towers along the 155 kilometers of the border around West Berlin, only three have been preserved in Berlin: the command posts at Kieler Eck and at Schlesischen Busch in Treptow-Köpenick, similar in function and construction, and the watchtower on Erna-Berger-Straße near Leipziger Platz. Command posts supervised the surrounding watchtowers and monitored larger sections of the border strip. The alarm triggered by contact with the electrified signal fences, introduced in 1967, was heard at the command post, and the National People’s Army border troops deployed whenever the border was breached were also stationed here.

A listed monument since 1995, the Kieler Eck command post watchtower is still in good shape. The watchtowers of this type are a striking expression of the inner-German border’s transformation into an ever more “perfect,” almost impenetrable death strip.

Since August 2003, the watchtower has been home to a memorial for the first fugitive to be shot and killed at the Berlin Wall. The 24-year-old tailor Günter Litfin was killed on 24 August 1961 – eleven days after construction on the Wall began – at Humboldthafen by GDR transport police as he attempted to reach West Berlin by swimming across the harbor.