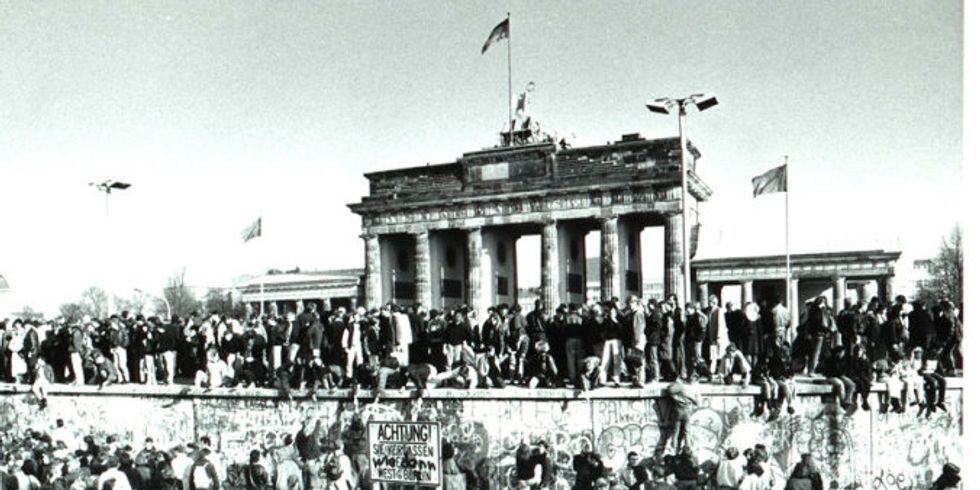 Brandenburg Gate after travel restrictions were lifted for the people of the GDR, 10 November 1989

At the end of a press conference in the early evening of 9 November 1989, shortly before 7:00 p.m., Central Committee member Günter Schabowski made a more or less casual announcement of a new travel regulation for GDR citizens.

In response to the persistent demands of GDR citizens, the SED leadership had published a draft bill for a travel law on November 6; initially, only the section on permanent exit (with no right of return) was to go into effect. This law was intended to stop the mass departure of people fleeing the country via Czechoslovakia. Demonstrators turned out in Leipzig, Berlin, and other cities to protest against the new law, and the regulation was revised on the morning of November 9. It now also included a provision on visits: GDR citizens could be issued visas for private travel with no waiting period and without meeting special requirements.

During the press conference, Schabowski ended up announcing the new regulation prematurely. Due to mistakes in communication, he told the surprised journalists that private trips abroad could now be applied for “without proof of eligibility, reasons for travel, or family ties.” Permission would be granted on short notice; as far as he knew, he said, the regulation was to go into effect “immediately.”

After West Germany’s ARD news show had broadcast Schabowski’s announcement as its lead story at 8:00 p.m., under the heading “GDR opens border,” more and more East Berliners started turning up at the checkpoints on the border to West Berlin, ready to exercise their new right to travel. The border guards had been given no instructions and had no idea what to do.

At 9:20 p.m., in order to relieve some of the pressure created by the crowds, the guards at the Bornholmer Strasse checkpoint let the first few people leave for West Berlin, although the head of the passport control units had their passports stamped invalid, expatriating the passport holders without their knowledge. By 11:30 p.m., however, the crowds Film 13,31 MB had grown so large that he – still without official orders – finally raised the barrier. In the hour that followed, around 20,000 people were able to cross the Bösebrücke bridge without being checked. Later that evening, the rest of the crossing points inside the city were opened. That night, the peaceful revolution underway in the GDR and the political changes taking place in Eastern Europe had succeeded in opening the Berlin Wall.

Formalities were abandoned at the crossing points into West Berlin in the next few days, too Film 1.36 MB. The entire city was delirious with happiness. The party went on for days on Kurfürstendamm, West Berlin’s largest shopping street, and many restaurants handed out free drinks to the visitors. After more than 28 years, the Wall had finally lost its power to terrify.

In the days and weeks to come, more and more crossing points were created between the two halves of the city, including at Brandenburg Gate on 22 December 1989. The part of the Wall that ran through the middle of the city was mostly torn down between June and November 1990. Souvenir hunters from all over the world had managed to obtain a piece of this symbol of the Cold War – and how it was overcome – in the meantime. Nowadays the former course of the Wall can be traced along 20 kilometers running through the heart of the city, marked by a double row of cobblestones set into the ground. The depth of the border strip and the construction of the border fortifications can best be visualized at the Berlin Wall Memorial at Bernauer Strasse 111.

The “Platz des 9. November 1989” has been laid out on the grounds of the former Bornholmer Strasse checkpoint, where you can also visit an open-air exhibition on the historical context of the events that took place here. For many years now, an ecumenical service organized by various Pankow congregations has been held each year on November 9 at 8:30 p.m. at the former border crossing.