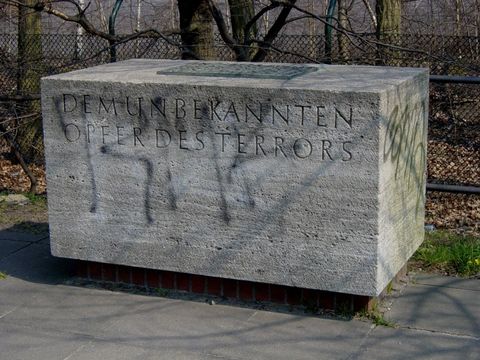 Memorial marker “for an unknown victim of the Wall”

This route first runs west of the border on the former territory of the GDR until it reaches the Teltowkanal; from there it follows the canal to the bridge Knesebeckbrücke, where it crosses over to the other side of the water. A memorial marker “for an unknown victim of the Wall” is dedicated to Roland Hoff, who tried to swim across the canal to West Berlin, near Wupperstrasse in Lichterfelde, on 29 August 1961. GDR border guards fired almost thirty shots at him; the 27-year-old Hoff was shot in the head and went under. The Wall Trail leads away from the canal at Sachtlebenstrasse in order to bypass the harbor Bauhafen, where ships used to stop for inspection. Another escape attempt took place nearby on 26 April 1963, when the 20-year-old Peter Mädler also tried to make it across the Teltowkanal to West Berlin. GDR border guards spotted him in the early hours of the morning and opened fire, fatally wounding him. The fire department recovered his body later on GDR territory. The border continued north of the canal, and the bike trail traces its course on what was once West Berlin territory to the lake Buschgrabensee, where the border and the trail veer off to the west. 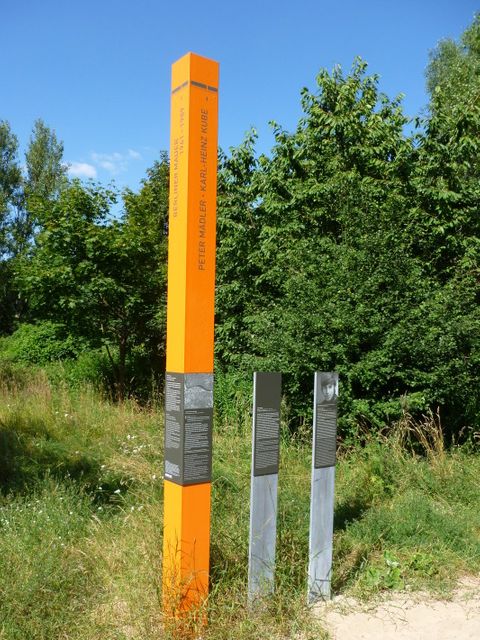 Info markers on Paul-Gerhardt Strasse recall Klaus Garten (on the southern bank of the Teltowkanal; once GDR territory, today this belongs to Teltow in Brandenburg), Roland Hoff and Günter Seling (between Max-Sabersky-Allee and Zehlendorfer Strasse), and Peter Mädler and Karl-Heinz Kube (at Zehlendorfer Strasse and Knesebeckstrasse), all of whom were shot and killed by GDR border guards on the border to West Berlin. The info markers were installed as close as possible to the place where they had attempted their escape. 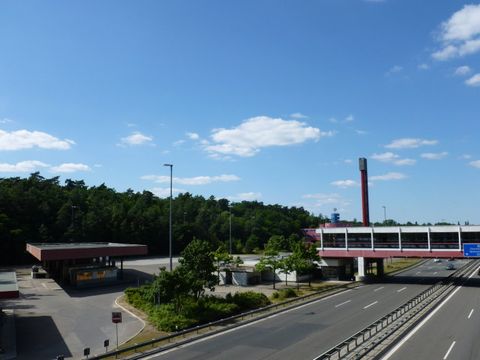 At Benschallee you will see a memorial marker for “the victims of the division of Germany.” Here the Wall Trail leaves the former border, running north to Königsweg, which rejoins the political border – if not the course of the Wall – just before the West Berlin checkpoint Dreilinden. From the bridge Königswegbrücke you have a good view of the “Checkpoint Bravo” building, now classified as a historical monument, which even the Western Allies had to go through on their way to Berlin from Helmstedt (“Checkpoint Alpha”). 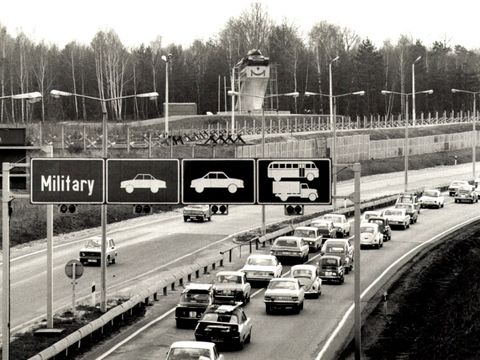 The Drewitz border crossing (GDR) lay to the south behind the bend. The photos on a Berlin Wall Trail info board on the Königswegbrücke remind visitors of the historical situation. From here you can take a five-minute walk to the former Soviet tank memorial that was transformed into an artwork by Eckhard Haisch in 1992 after the fall of the Wall. Instead of a tank, the pedestal along the expressway is now topped by a Soviet snowplow. 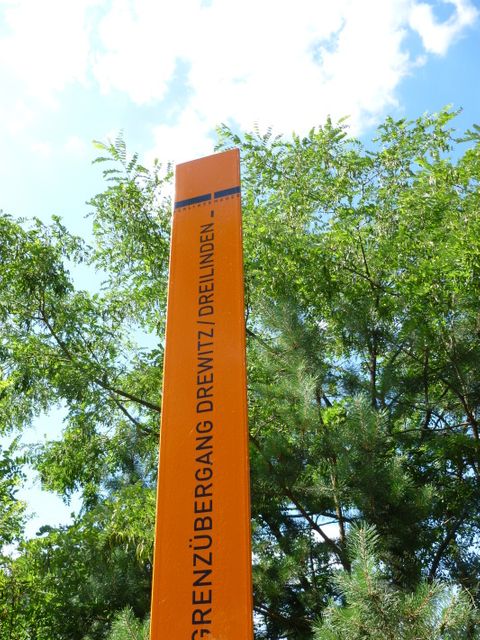 Column at the Drewitz checkpoint

The organization Checkpoint Bravo e.V. has set up the Erinnerungs- und Begegnungsstätte Drewitz-Dreilinden in the GDR border crossing’s old command center, which has been preserved. The exhibition “FREUNDwärts – FEINDwärts” inside and in front of the old command tower highlights events and life stories connected with this border checkpoint. An outdoor educational trail uses original building sections and found objects to illustrate the construction of the border installations. Info markers have been put up for Walter Kittel and Christian Buttkus along the Teltow/Steglitz-Zehlendorf section of the bike path. 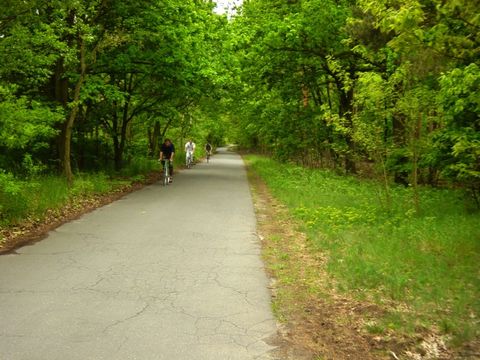 Königsweg continues along the political border on the other side of the A115 expressway, while the border installations ran south of the old expressway embankment.

The old expressway led to Albrechts Teerofen, where the Drewitz border crossing was located until 1969. There you can see old photos of the border crossing on a Berlin Wall Trail info board. The highway restaurant and remains of the checkpoint are still standing. In 1965, the 42-year-old West Berliner Hermann Döbler was shot nearby, when he and his motorboat accidentally ended up in GDR waters along the Teltowkanal. Info markers in the Kleinmachnow section of the route recall Hermann Döbler and Holger H.. 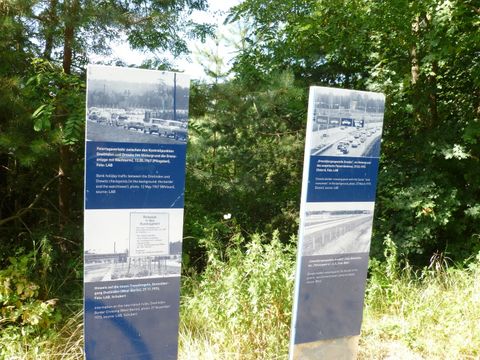 You can get back to the main route from the old border crossing via the side road. The main route will take you via Bäkestrasse, Neue Kreisstrasse, and Stubenrauchstrasse to the Griebnitzsee S-Bahn station, the former border crossing for passengers traveling by train. Where the main route and side road intersect, a cul-de-sac leads into the West Berlin exclave Steinstücken. With a population of around 200, it belonged to Berlin’s American sector but was located on GDR territory. Three U.S. military policemen were stationed here as a symbolic gesture, and the U.S. Army Aviation Detachment Berlin kept a helicopter here ready to take off to West Berlin. Not until 1972 could the road to Steinstücken be taken over and improved by West Berlin. A Berlin Wall Trail info board, the memorial for Willi Marzahn on Königsweg, and the helicopter memorial on Teltower Strasse recall the historical situation. The 21-year-old Willi Marzahn was a non-commissioned officer in the GDR’s National People’s Army when he and a fellow soldier tried to escape to West Berlin on 19 March 1966. A gun fight ensued when they were spotted by border guards; Willi Marzahn was shot and killed, while his friend made it to West Berlin. Peter Hauptmann, who was not trying to flee the country, was shot in the border area in front of his house on Stahnsdorfer Strasse on 3 May 1965. Traveling south on Bernhard-Beyer-Strasse, you will see an info marker dedicated to him.

About the route: If you are planning to visit the memorial for the victims of the Lichterfelde satellite concentration camp (originally at Wismarer Strasse 26–36), we recommend that you start your tour at the Osdorfer Strasse S-Bahn station and, after visiting the memorial on Wismarer Strasse, that you take Ostpreussendamm to reach the Wall Trail. From the Lichterfelde Süd S-Bahn station, you can take Holtheimer Weg and Ahlener Weg to the Wall Trail. You can cut the next 15 kilometers in half by taking Berlepschstrasse to the Zehlendorf S-Bahn station. At Benschallee, the Wall Trail leaves the border strip and and runs along Königsweg to Kohlhasenbrück. You can also follow the former expressway embankment and cross the remaining bridge to go to the old GDR border crossing Nowawes/Dreilinden and to Albrechts Teerofen. From there, a paved side road along Kremnitzufer will bring you back to the main route. The cul-de-sac into Steinstücken starts at this intersection. The main route brings you to the Griebnitzsee S-Bahn station via Bäkestrasse, Neue Kreisstrasse, and Stubenrauchstrasse. 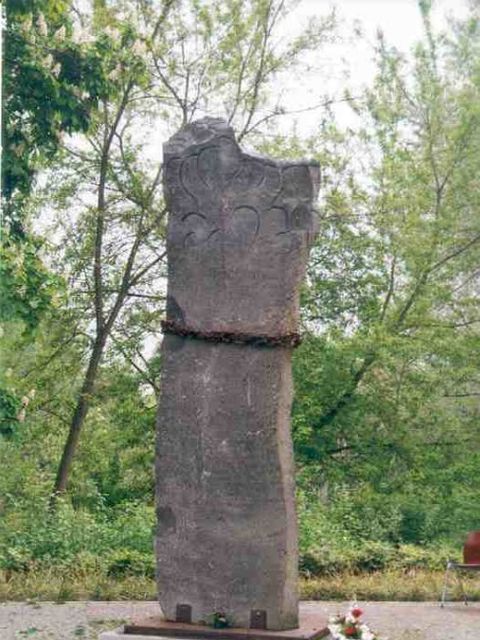