The basis of the 20 main green routes is the open space system of the landscape programme including the species protection programme for Berlin (LaPro 2016). One aim of the Landscape Programme for Berlin is, to connect residential areas – away from busy roads – with attractive recreational areas and at the same time offer a safe, environmentally friendly, health-promoting and “green” alternative to car traffic. A network of 20 main green routes, whose network nodes consist of parks and local recreation areas, makes it possible. 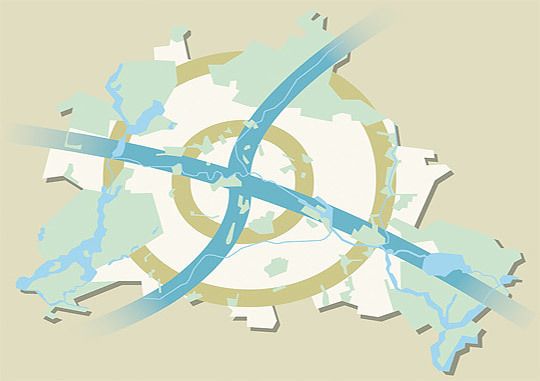 Directly around the densely built-up inner city of Berlin lies a ring of public parks, allotment gardens and cemeteries, the so-called Inner Park Ring. It was created – thanks to a forward-looking urban development plan in the 1920s – as a contribution to healthy living and working conditions for all Berliners. New parks such as the Mauerpark and the Schöneberger Südgelände complement the historic ones. The inner park ring can be experienced by Walk No. 18 of the same name.

Berlin’s Landscape Programme of 1994 (Berliner Landschaftsprogramm von 1994) envisaged a closely-knit network of green corridors to enhance the use of recreational green spaces and parks by connecting them both with one another and large residential areas. The programme also saw these green corridors as creating an attractive network of walks and cycle paths. The connecting routes were termed “ideal routes”. Taken together with parks and other recreational areas, these “ideal routes” form the “Berlin system of open spaces (Berliner Freiraumsystem)” in the city’s overall landscape planning.

In 2004 the preparatory cooperation project “A plan for 20 main green routes” between BUND Berlin e.V., FUSS e.V. Berlin and the State of Berlin, represented by the Senate Department for Urban Development and the Environment, is promoted. Thanks to the participation of over 100 voluntary walker in the project, the network of paths can be optimized. The existing gaps in the route network are determined and suggestions for their elimination or for temporary detours are collected.

For the first time, the 20 Green Walks in Berlin network as accessible at that time, together with any temporary detours on the routes, became available through the internet via the FIS Broker, Berlin’s main portal application for online access to maps, plans and other geodata. The digitalized map was based on the reports of the volunteer walkers.

In March 2006, a cooperation agreement to prepare and implement the 20 Green Walks in Berlin was signed between BUND Berlin e.V. and FUSS e.V. Berlin, two not-for-profit organisations, and the State of Berlin, represented by Division I E of the Senate Department for Urban Development. The cooperation partners sought to establish, as soon as possible, a functioning and accessible recreational network of 20 Green Walks in Berlin connecting local authority and publicly accessible green and open spaces in the city.

A flyer entitled “Flanieren entlang der Stadtspree – Einer von 20 grünen Hauptwegen lädt ein” (Strolling along the urban River Spree – Discover one of 20 Green Walks in Berlin) was published by Directorate I, Senate Department for Urban Development. It traced the course of the River Spree Walk (Walk No. 1) between Charlottenburg Palace (Schloss Charlottenburg) and the bay “Rummelsburger Bucht”, presenting over 50 interesting locations along the route, which have played or would play a key role in Berlin’s development. The flyer is out of print today.

On the initiative of Berlin’s piekart Press, a public-private partnership was formed in late 2007 between the publisher, nature conservancy organisations and the Senate Department for Urban Development to launch the first general map for walkers in bookshops in 2008. As early as May 2008, the jointly produced general map entitled “Flanieren – Spazieren – Wandern” (Strolling – Walking – Hiking) was available in nearly all Berlin bookstores as well as in outlets with a wide range of newspapers and magazines. In 2018 the publisher ceases its publishing activities.

As part of the 20th anniversary celebrations of the fall of the Berlin Wall, the Senate Department for Urban Development presented its flyer “Grünes Band Berlin” (Berlin’s Green Belt). The flyer, inspired by the European Green Belt, focused on those stretches of still largely untouched countryside along the course of the former Wall. The route presented, covering the northern section along the inner-city Wall, is also part of the North-South-Walk (Walk No. 5) of the 20 Green Walks network.

The second publisher to publish the 20 green main paths in its large hiking and cycling map “Berlin and the surrounding area – excursions to Berlin’s sights” (in the 1st edition 2010) is the Dr. Barthel Verlag.

The first marking of the entire network of trails was realized in 2010 by the “Kompetenzzentrum für Ingenieurbiologie e.V.” (Competence Center for Engineering Biology). Since 2011, the signed routes have been walked by the “adopt-a-walk” sponsors from the not-for-profit Berliner Wanderverband e.V. hiking association. Their reports provide the basis for monitoring and updating the walks annually. They also mark the walks with the typical German waymarkers (white-blue-white) (annually). The Senate Department then publishes the latest, officially coordinated network of walks.

2014 – Priority concept to close the gaps

In 2014, the Senate Department for Urban Development and Environment commissioned an investigation into the remaining gaps in the route network (priority concept for closing the gaps in the 20 main green routes). It contains specific statements on the state of the gaps, proposed measures for the further development of the route network and closing of the gaps as well as statements on the effort and prioritization of closing the gaps.

since 2018 – Feasibility studies to close the gaps

On the basis of the above-mentioned priority concept, more detailed investigations within the framework of so-called feasibility studies were commissioned for selected gaps, of which the closure seems to be realistic. These should demonstrate the feasibility of closing the gap by specifying the measures and work steps to be carried out, checking the availability of the property and estimate the costs.

In addition to the data for further digital use, PDF files are also available for download since May 2021. These can be printed out by anyone if the analogue hiking map from Dr. Barthel Verlag is not at hand and the digital devices are not in use (or should not be used).)