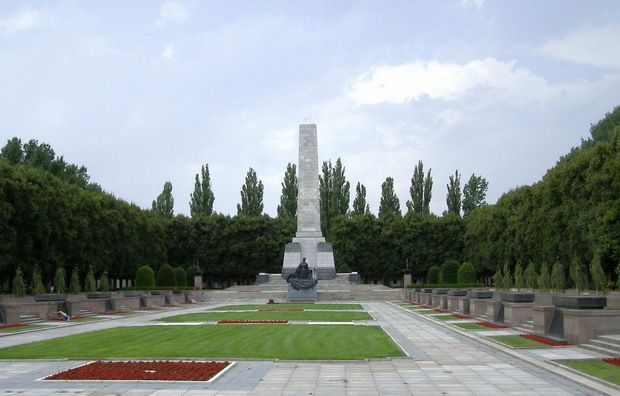 Schönholzer Heide, a park that had been popular with Berliners for family outings since the 19th century, was converted into a huge camp for forced laborers during World War II. After the war, a military cemetery designed by a group of Soviet architects, Konstantin A. Solovyev, M. Belarnzev, and W.D. Korolyev, and the sculptor Ivan G. Pershutchev was laid out at the northwest end of the park from May 1947 to November 1949. More than 13,000 officers and soldiers of the Red Army who were killed in the last stages of the war in Berlin in April and May 1945, including 120 women, were buried here.

An avenue of linden trees leads from a small clearing off Germanenstrasse to the memorial. The approach is flanked by two granite pillars embellished with symbolic wreaths and bronze bowls holding a sculpted eternal flame. Two square towers of red granite are on either side of the main entrance, decorated with large bronze reliefs depicting the Soviet people in combat and in mourning. The exterior walls adjacent to the towers display eight coats of arms in cartouche form with the emblems of the various branches of the Soviet armed forces. Quotes from Stalin in German and Russian are inscribed on the walls of the two towers, and inside each tower is an empty bronze urn about 1.5 meters tall. A multicolored skylight composed of hundreds of different pieces reproduces the coat of arms of the Soviet Union inside the right tower, which is reminiscent of an ancient Egyptian burial chamber.

The center of the cemetery grounds is flanked by 16 tombs in which 1182 Red Army soldiers were laid to rest.

The main monument, a Russian “Mother Homeland” mourning her fallen son, who lies under the flag of victory, is at the other end of the grounds and recalls a Christian pietà. It stands in front of a 33.5-meter obelisk of light gray syenite. The names of fallen officers are found on the 42 grave markers on the black ashlars making up the base of the obelisk. Two Soviet colonels are buried in the crypt beneath the obelisk’s hall of honor. A monument behind the obelisk commemorates the Soviet soldiers who died in German captivity.

Another 100 grave markers, separated by stylized torches, line the wall that surrounds the memorial. Inscribed on the markers are the name, rank, and year of birth of 2647 fallen Soviet soldiers. Less than 1/4 of the people buried here were able to be identified; the rest are unnamed. 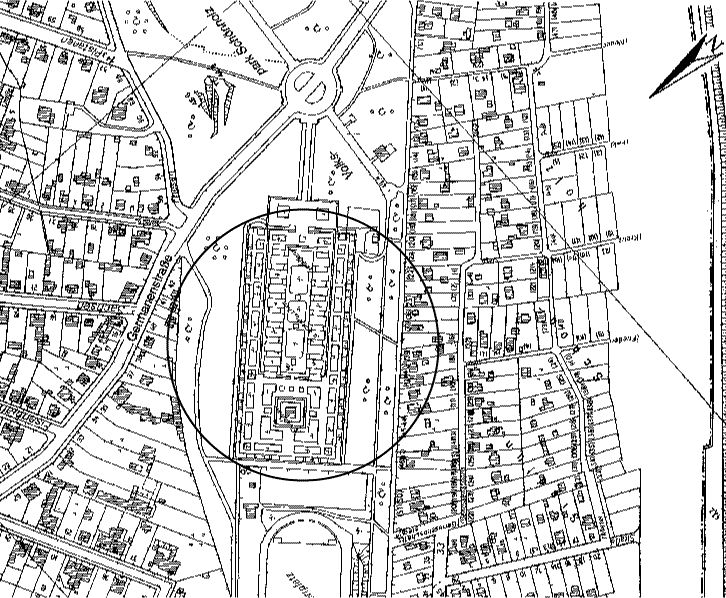