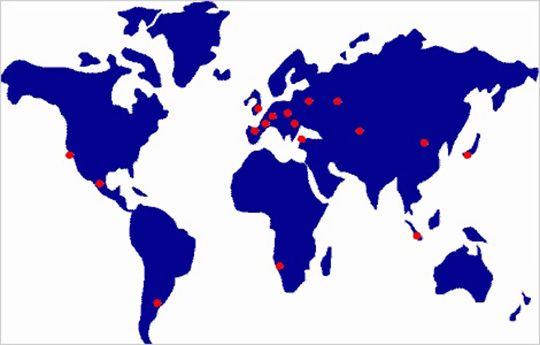 Cities are places of knowledge, where experiences are consolidated, where solutions are found, and where we learn from good as well as bad projects. Berlin is linked with metropolises in the whole world, it exchanges experiences and views on urban challenges, innovative ideas, smart concepts, participative structures, sustainable solutions. In doing so, it learns from others and offers its experience in European and international networks. Berlin is linked with 17 cities within the framework of contractual City partnerships and memorandums: Los Angeles, Mexico City, Buenos Aires, Paris, Madrid, London, Brussels, Istanbul, Budapest, Jakarta, Tashkent, Moscow, Warsaw, Prague, Peking, Tokyo and Windhoek.

The Senate Department for the Environment, Urban Mobility, Consumer Protection and Climate Action maintains close cooperation with several of the metropolises – for example, with Paris, Moscow, Brussels, Prague and Warsaw – and also continuously develops cooperation with other major cities such as London. Furthermore, it maintains professional exchange with other major cities such as Copenhagen, Oslo, Amsterdam, Vienna and Madrid.

The cooperation involves intensive exchange in specific areas at joint events, seminars, workshops and reciprocal visits and study trips of the political management and functional departments. Berlin’s experiences and expertise are very much in demand internationally.

The administration exchange of employees with the various administrations of the partner cities plays a particularly important role. Between 2012 and 2014, the EU and International Affairs Unit initiated and evaluated a pilot project for administrative exchange with the city administrations of the European capitals Helsinki, Paris, Warsaw, Vienna and with Amsterdam. The pilot project, named European City Exchange – Move Your Mind (MYM for short), was part of the ERASMUS subprogramme, Leonardo da Vinci, and was singled out by the EU Commission as an outstanding project. The employee stays, lasting several months, promoted European and collegial reasoning and intensified cooperation with the cities. After the programme ended, Berlin’s senate departments and districts, which had established European exchanges in the past, endeavoured successfully to continue the successful format of job shadowing. Employees of the Senate Department for the Environment, Urban Mobility, Consumer Protection and Climate Action and the Senate Department for Urban Development, Building and Housing now job shadow as part of the “European Administration Exchange” project, or EAE for short.

The partner cities are also invited to send their coworkers to Berlin as part of their own programmes.