Immediately after the end of World War II, three large Soviet memorials were built in Berlin to commemorate liberation of Berlin and the unconditional surrender of Nazi Germany: in the Großer Tiergarten (Tiergarten Park), in Treptower Park and in the park Schönholzer Heide.

There are also large soldiers’ cemeteries for more than 22,000 Soviet soldiers killed in and around Berlin during the fighting at that time. They are covered by the German Law on the Preservation of the Graves of the Victims of War and Tyranny (Graves Law).

The obligation of the Federal Republic of Germany to respect and care for these memorials and to provide them with protected status under German law was an issue during the “two-plus-four” negotiations – the 1990 negotiations between the four postwar occupation powers and East and West Germany on reunification – and also during the negotiations on the German-Soviet treaty on neighborly relations of November 9, 1990. The Soviet side viewed these matters as essential prerequisites for German reunification. The resulting obligations devolving upon the State of Berlin have been funded by regular federal payments since 1998. For Berlin and the federal government it is very important to honor the fallen with dignity.

Due to their monumental expressiveness, these sites are important material remains of the final period of the war, which must be protected and honored. Even today, memorial events and wreath-laying ceremonies are held here for the Soviet victims of the war.

Soviet Memorial in the Tiergarten

The Tiergarten memorial was constructed on the orders of the Red Army shortly after the end of World War II. It was the first Soviet memorial in Berlin and was put up in the heart of the city, not far from Brandenburg Gate and the Reichstag building. More information

The Soviet Memorial in Treptower Park was built after the end of World War II. The military council of the Soviet military administration in Germany had sponsored a competition in the fall of 1946 that explicitly solicited designs foregrounding the liberation from National Socialism. More information 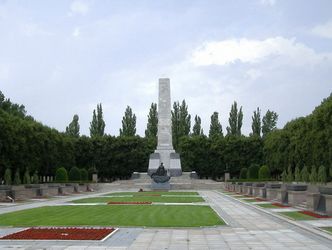 Schönholzer Heide, a park that had been popular with Berliners for family outings since the 19th century, was converted into a huge camp for forced laborers during World War II. More information