Soviet Memorial in the Tiergarten

The Tiergarten memorial was constructed on the orders of the Red Army shortly after the end of World War II. It was the first Soviet memorial in Berlin and was put up in the heart of the city, not far from Brandenburg Gate and the Reichstag building. It was officially dedicated already on 11 November 1945. The design was done by the sculptors Lev E. Kerbel and Vladimir E. Zigal and the architect Nikolai W. Sergievski. The memorial’s location was a conscious choice, since it functions as a literal barrier to the victory once envisioned by the Nazis: it stands where the “Siegesallee” (victory avenue) planned as a north-south axis by Albert Speer, Adolf Hitler’s chief architect, would have intersected with the east-west axis (today’s Strasse des 17. Juni).

The main approach on Strasse des 17. Juni is flanked by two Soviet T-34 tanks, the first to reach the city in 1945 with the advancing Soviet army. Two artillery guns stand at an angle behind these, level with the first set of steps. Volleys fired from these guns had proclaimed the end of the “Battle of Berlin.” The names of officers who fell in battle in Berlin between 14 April and 1 May 1945, honored as “Heroes of the Soviet Union,” are engraved on two stone sarcophagi halfway up the steps. The columns at the top are the heart of the memorial. Inscriptions on the pillars list various branches of the Red Army and the names of fallen soldiers. The pillar in the center, taller and larger than the others, supports an 8-meter bronze sculpture of a Red Army soldier. His gun hangs from his shoulder, symbolizing the end of the war, and he holds his left hand out over the fallen comrades who are buried at the foot of the memorial. Two fountains stand behind the columns and represent the tears and the grief of the people of what was then the Soviet Union, mourning the soldiers who had died.

More than 2,000 fallen soldiers are buried on the landscaped grounds behind the memorial; individual graves cannot be identified. Info boards were put up on the former sentry buildings some time ago. These tell visitors about the three Soviet memorials in Berlin, as well as other places in the city that recall the war and its legacy of death and destruction.

Overview Soviet Memorial in the Tiergarten 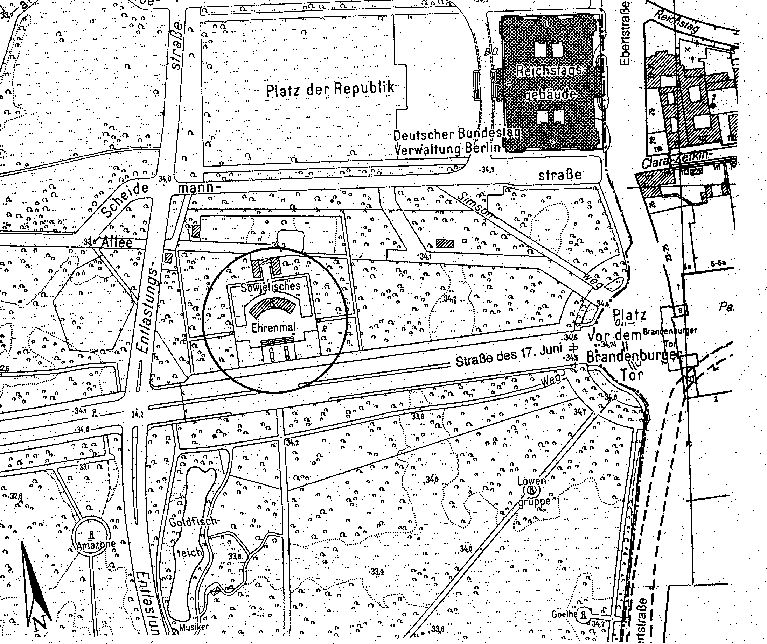