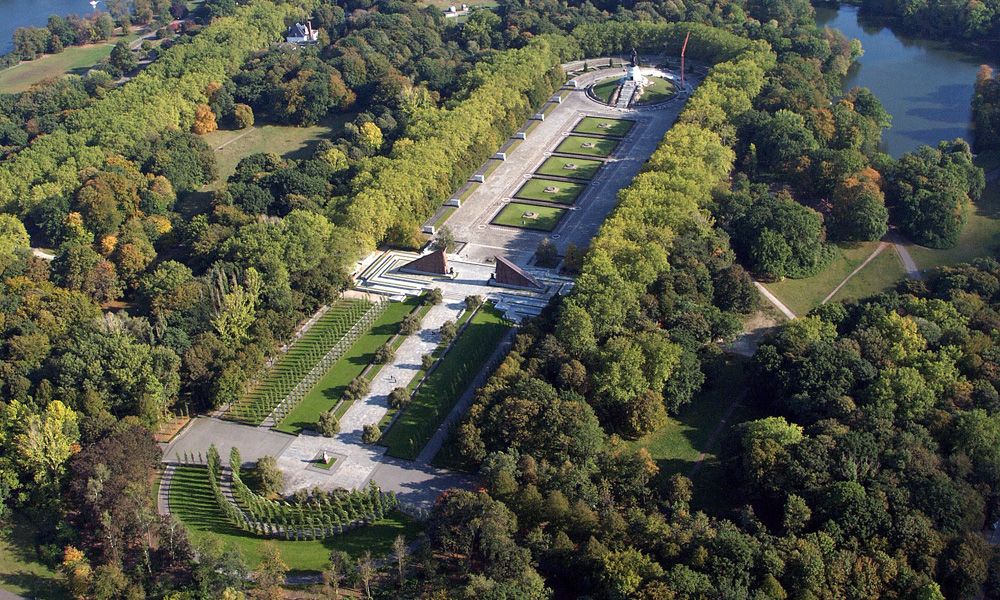 The Soviet Memorial in Treptower Park was built after the end of World War II. The military council of the Soviet military administration in Germany had sponsored a competition in the fall of 1946 that explicitly solicited designs foregrounding the liberation from National Socialism, rather than the idea of victory.

Thirty-three designs were submitted; the winning entry came from a Soviet “creative collective” headed by the architect Yakov S. Belopolski, the sculptor Yevgeni W. Vuchetich, the painter Alexander A. Gorpenko, and the engineer Sarra S. Valerius. In 1947 a special unit of engineer officers was commissioned to construct the memorial; German companies carried out the work under their supervision. This extraordinary war memorial and military cemetery was officially dedicated on 8 May 1949. It covered 9 hectares between Puschkinallee to the north and the street Am Treptower Park to the south. The site had once been a hippodrome-shaped playground and sports field in the middle of a public park designed by Gustav Meyer and laid out from 1876 to 1888.

The two entrances to the memorial, on Puschkinallee and on the street Am Treptower Park, are defined by two massive arches. Wide paths first take visitors into a clearing, where they see a three-meter granite statue of “Mother Homeland.” A promenade flanked by weeping birches then leads past two huge stylized flags sculpted of red granite into the main section of the grounds, the actual war cemetery. At the foot of the raised plateau and along the central axis are five rectangular lawn sections, which are designed as symbolic communal graves and framed by a broad, decorative mosaic walkway. Eight sarcophagi made of limestone blocks stand on each side of this central area and symbolize the 16 republics the Soviet Union consisted of at the time. Their reliefs illustrate scenes from the “Great Patriotic War” waged from 1941 to 1945. The graves of the more than 7,000 soldiers killed in battle and laid to rest here are behind the sarcophagi in the lawn areas under the sycamore trees.

The heart of the memorial grounds is a conical hill bearing a tomb that also serves as the pedestal for the memorial’s central figure, a Red Army soldier. The interior of the crypt is decorated with a mosaic frieze portraying representatives from the 16 Soviet republics, who are shown honoring the dead. The bronze sculpture of the Soviet soldier, holding a rescued child in his arm and a lowered sword over a shattered swastika, symbolizes the overthrow of National Socialism and the prospect of a peaceful future. 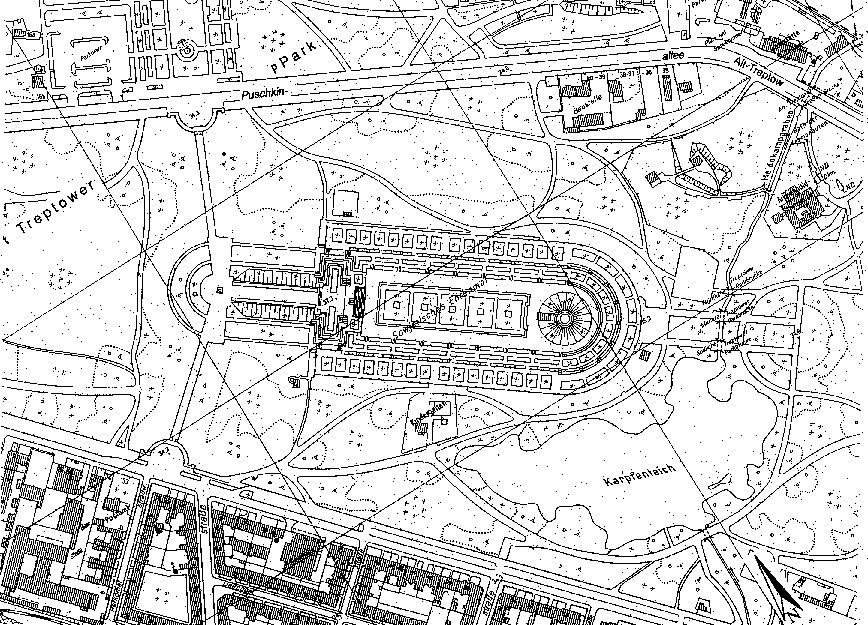