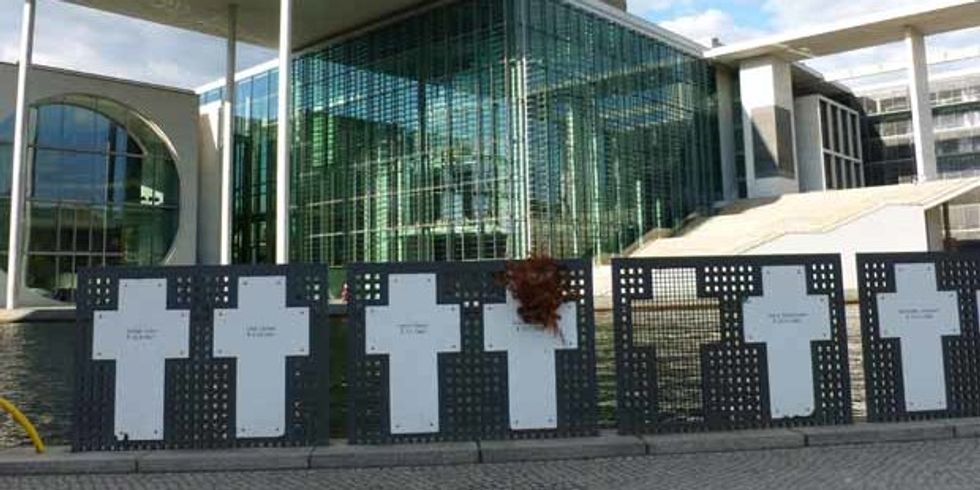 The GDR’s border fortifications ran along the eastern side of the Reichstag building (today the home of the German Bundestag). The southern bank of the Spree belonged to West Berlin, while the water itself was on East Berlin territory. In 1971, on the tenth anniversary of the construction of the Wall, a group of private citizens called the “Berliner Bürger-Verein” established the “Weisse Kreuze” (White Crosses) memorial site at the point where, until 1990, the outer wall met the riverbank.

The memorial was temporarily moved to make way for construction along the river at Reichstagufer. The installation, now seven white crosses, returned to the riverbank on 17 June 2003 as a reminder of all those who died trying to escape to West Berlin from the GDR after the border was sealed off.

The history of the “Weisse Kreuze” memorial explains why each of the names was chosen: the crosses were put up at sites where fugitives trying to reach West Berlin had either been shot by GDR border guards or died in their attempt to escape. Over the years, the Berliner Bürger-Verein found itself unable to keep up with the expense of maintaining the crosses, which were located far apart, so the crosses were moved to two central locations, one on the bank of Spree and another on Bernauer Strasse in the borough of Wedding. The crosses are to be put up again here, too, as part of the “commemorative landscape” emerging here.

Over the years, the Berliner Bürger-Verein found itself unable to keep up with the effort and expense of maintaining the crosses, which were located far apart from one another. The crosses have since been moved to a central location on the bank of the Spree.