Memorial for Chris Gueffroy at the Britzer Zweigkanal 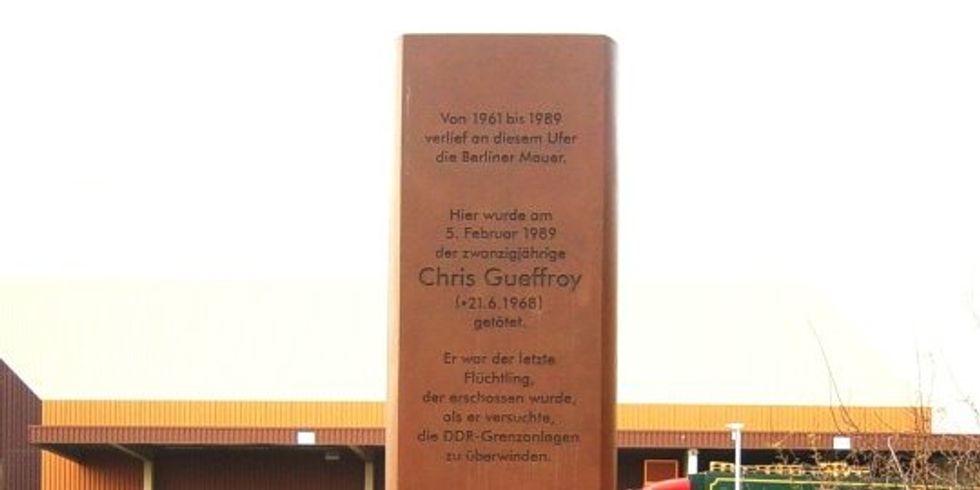 On the night of 5 February 1989, 20-year-old Chris Gueffroy and a friend planned to escape from East Berlin to West Berlin. The two of them wrongly believed that border guards were no longer shooting at people fleeing over the Wall.

After they had made it over the inner wall and the signal fence, the young men were spotted by GDR border guards. From right and left, two patrols came running towards the fugitives; after calling out and firing warning shots, the guards opened fire. Shot in the heart, Chris Gueffroy collapsed at the fence closest to the border. He was the last fugitive to be shot dead – just a few months before the fall of the Wall – by GDR border guards at the border to West Berlin. His friend was injured and sentenced to three years in prison by the Berlin-Pankow district court for “attempted illegal border-crossing in the first degree.” In October 1989 he was released to West Berlin. The border guard who fired the shot that killed Chris Gueffroy was given a suspended sentence of two years on appeal. A stele was put up at the historical site on 21 June 2003, the day that would have been Chris Gueffroy’s 35th birthday, to honor his memory. The memorial was designed by Karl Biedermann and bears this inscription: “The Berlin Wall ran along the bank of this canal from 1961 to 1989. On 5 February 1989, 20-year-old Chris Gueffroy, born on 21 June 1968, was killed here. He was the last fugitive to be shot trying to cross the Wall from the GDR.”
Direkt zur Kontaktinformation