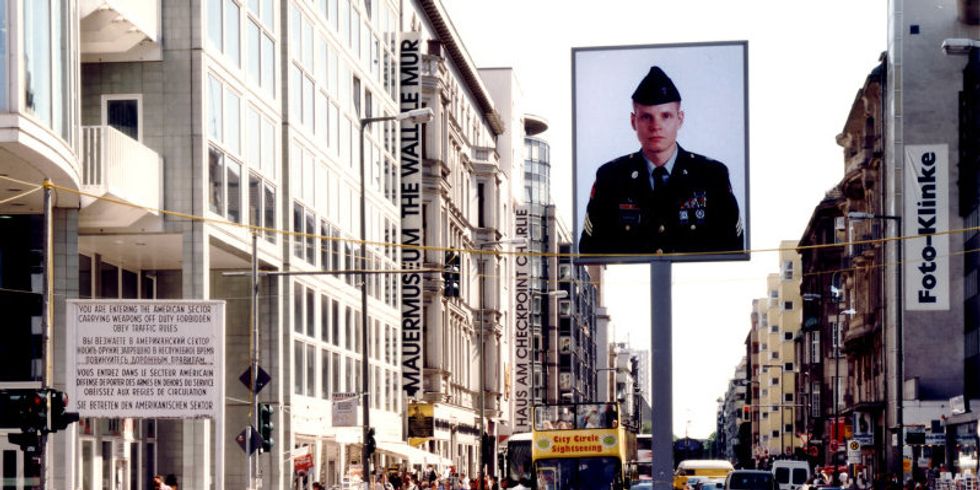 Frank Thiel’s light-box installation (“Untitled”) shows two larger-than-life color portraits. A young American and a young “Soviet” soldier each look into the other’s territory, thus marking the dividing line and crossing point between the former spheres of influence of the two world powers.

The photos were taken in 1994 before the Allied forces withdrew from Berlin. Since the Soviet Union disintegrated in 1991, the “Soviet” soldier is wearing the uniform of the new Russian federation. Frank Thiel, the artist, explained his design as follows:

“A Russian and an American soldier, since the Soviet sector bordered here on the American sector. At the same time, these portraits translate the omnipresent sector signs of the past – “You are leaving the American/British/French sector” – into picture form. They are likewise a reference to the historical moment when Soviet and American tanks faced off against each other right here.

By using two portraits to symbolize almost 50 years of history, I am suggesting that these two faces are representative. I also hoped that this would be an issue when the work was reviewed or discussed later.

Can a simple portrait be used as a metaphor for a situation this complex? The light box used here is a medium created for public spaces by the advertising industry in order to reach consumers 24 hours a day with their messages. These light boxes can now be found all over the city.

In a way, the light boxes here at Checkpoint Charlie are in dialogue – as secret accomplices and, probably, as competitors – with all the other light boxes in the city. While I did not intend for them to be confused with the others, I also did not want to rule that out.”