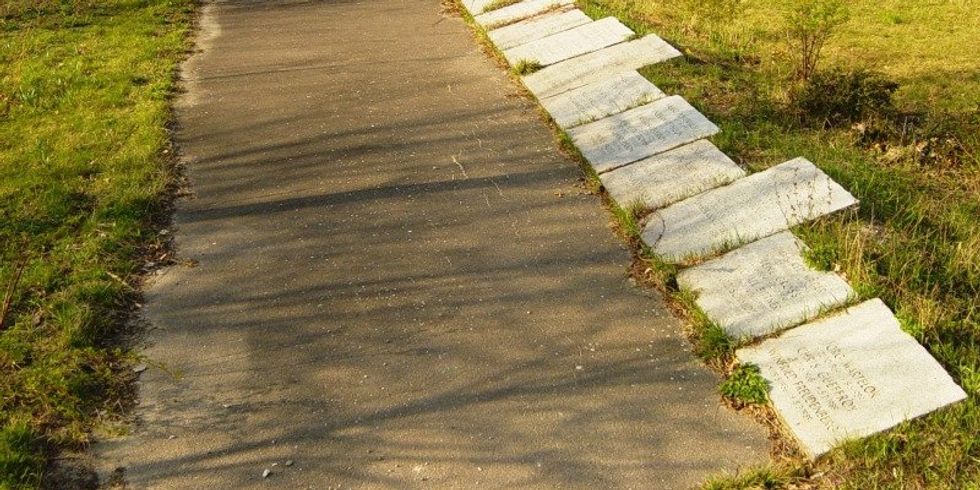 The “Parlament der Bäume gegen Krieg und Gewalt” (Parliament of Trees against War and Violence) is a memorial for the people who died at the Berlin Wall started by the artist Ben Wagin on the former border strip in 1990. This installation of trees, memorial stones, original parts of the border fortifications, pictures, and text was created by various artists. The names of 258 victims of the Wall are inscribed on slabs of granite.

Not all of the sections of the inner wall that were integrated into the memorial are actually standing at their original location. The “Parlament der Bäume” had to be scaled down to make way for the construction of the Marie-Elisabeth-Lüders-Haus, which houses the library of the German Bundestag. The new installation on the lower floor of this Bundestag building consists of original Wall segments marking the exact course of the former dividing line. Ben Wagin has painted numbers on each segment: a year and the number of people killed at the Wall in that year. Berlin’s Senator for Urban Development, Ingeborg Junge-Reyer, and the Speaker of the Bundestag, Wolfgang Thierse, officially opened this site in September 2005 as the “Wall memorial at the Marie-Elisabeth-Lüders-Haus.”

The Wall memorial can be reached from the Schiffbauerdamm promenade, 10117 Berlin-Mitte: Friday – Sunday, 11 a.m. – 5 p.m.; admission is free.

The Schiffbauerdamm promenade extends from the bridge Marschallbrücke, where the Wall once stood, to another bridge, Kronprinzenbrücke, which was destroyed in the Second World War and not rebuilt. The reconstruction of Kronprinzenbrücke according to a design by the architect Santiago Calatrava was one of the first links reuniting East and West Berlin territory after the fall of the Wall and reunification in 1989 and 1990. Attempts to portray the former course of the border in this area are often confusing: the political border – and thus the border that was crucial for fugitives – between East and West Berlin was the southern bank of the Spree on the side of the Reichstag building. The GDR government, however, had the Wall constructed along the northern bank of the Spree.