Academy of the Arts at Pariser Platz 4 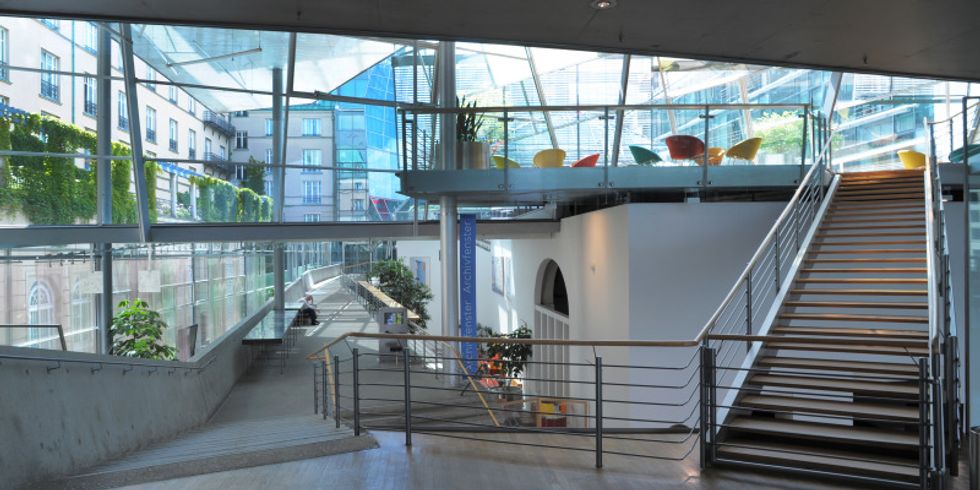 Both East and West Berlin had their own academy of the arts in the years that Berlin was divided. In 1993 the two institutions were merged to form the Akademie der Künste Berlin-Brandenburg, which returned to its original location in 2005. As a kind of “house within a house,” the imposing galleries of the old building extend back behind the open glass façade of the new structure. Architect Günther Behnisch has united the traces of history with modern architectural elements.

The Arnim-Boitzenburg Palace originally stood on the property at Pariser Platz; what was called the “Royal” Academy of the Arts at the time moved into the building in 1907.

In 1937, the Academy was evicted on Hitler’s orders so that Albert Speer, his Inspector General of Building, could use its exhibition rooms, now restored, as the headquarters for the construction project that was to remake Berlin as the National Socialist “world capital” Germania.

The building was destroyed in bombing raids during the Second World War, and the façade of the old palace was demolished in the 1950s. All that was left was part of a building on the border of the Soviet sector. Rather than reopening the exhibition rooms, as originally planned, ateliers, workshops, and storage space for the archive were set up.

After the Berlin Wall went up, access to the house was restricted, since it was now subject to the special regulations on movement within the border zone. GDR border troops set up a command center in a part of the historic exhibition rooms that was off-limits to members of the academy staff, along with cells for “border violators,” who were usually fugitives.

On 2 October 1971, the West Berliner Dieter Beilig was shot to death in these rooms. Beilig, who was living in Kreuzberg at the time, had climbed up onto the Wall at Brandenburg Gate from the western side and called for German unification. When West Berlin police officers tried to pull him back down, he jumped off the Wall into the GDR border strip and was taken away by GDR border guards. Inside the command center, Beilig – who had already been sentenced once in the GDR and bought free by the West after a similar attempt – tried to open a window. He was shot from behind by a border guard at a distance of two meters.

As part of the cover-up of the events surrounding his death, it was argued that the guard had acted in self-defense; the dead man’s fingerprints were put on the murder weapon as “proof” that Beilig had attacked him. According to the Berlin special prosecutor’s office set up after reunification to deal with crimes of this kind, no charges were filed in the case: an investigation revealed that the border guard in question had died in the early 1990s.