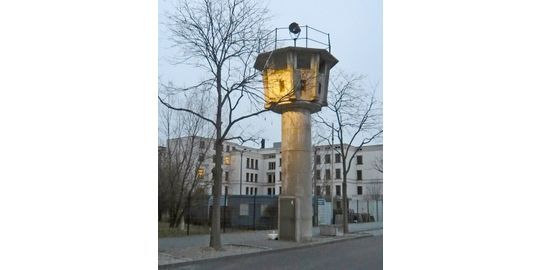 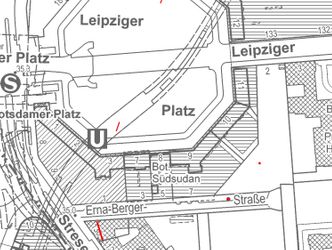 The watchtower on Erna-Berger-Straße is one of the last of its kind. Its mushroom-shaped “panorama observation tower” consists of a slender rounded shaft, inside of which was an iron ladder used to reach the octagonal observation perch on top. This model was introduced in 1969 along the Berlin and inner-German borders. Like the rest of the border fortifications, watchtowers, too, were constantly being “perfected” and underwent a number of changes in the 28 years of the Berlin Wall’s existence. Because of the narrow shaft, which was not particularly stable and also made it difficult for border guards to turn out quickly when needed, these “panorama towers” were later replaced by more spacious, square-shaped observation towers.

The watchtower located on the new Erna-Berger-Straße was outside the “no man’s land” and was used to monitor the area in front of the border. Border guards posted here could keep an eye on the recesses and uneven terrain between the former House of Ministries (now the Federal Ministry of Finance), the GDR’s Academy of Sciences (now the Berlin House of Representatives), and the Hinterland wall (inner wall) along Stresemannstraße. Other “panorama observation towers” now protected as historical monuments were used to monitor high-security institutions like the Stasi (State Security) prison in Hohenschönhausen and the Stasi office in Weissensee.

The watchtower on Erna-Berger-Straße has been listed as a historical monument since 2001. As a result of new construction on the property after reunification, the tower had to be moved about eight meters to the east.