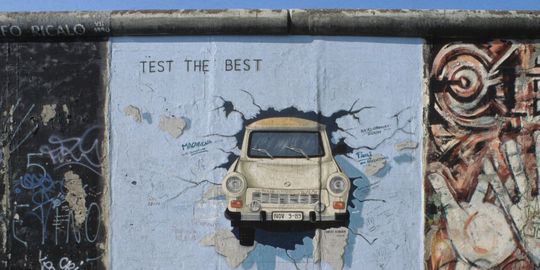 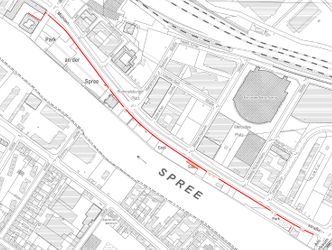 The longest section of the Berlin Wall still standing lies north of the bridge Oberbaumbrücke in the Kreuzberg-Friedrichshain borough. This 1.3-kilometer-long section of the Wall along Mühlenstraße was painted in the spring of 1990 by artists from 21 different countries who produced 106 large-scale murals. Some of the best-known images include Birgit Kinder’s “Test the best,” a painting of a Trabi (an East German car) breaking through the Wall, and the Russian artist Dimitri Vrubel’s “Mein Gott hilf mir, diese tödliche Liebe zu überleben” (Dear God, help me to survive this fatal love), a picture of Honecker and Brezhnev’s brotherly kiss. This ensemble of paintings was officially opened in September 1990 as the East Side Gallery; known worldwide, it is extremely popular with visitors to Berlin. The original plan to send the pictures – along with the wall sections – around the world as an exhibition and then to auction them off was never realized, and the wall and its images have been listed as a historical monument since November 1991. The East Side Gallery has become a symbol of the city’s division. Nowhere else can visitors experience as vividly the sheer dimensions of the “Iron Curtain” dividing the city and the country. The East Side Gallery’s paintings, which focus in many different ways on the longing for peace and freedom, are also an expression of the joy inspired by the fall of this wall.

The entire width of the Spree here was on East Berlin territory, with the sector boundary running along the Kreuzberg riverbank. The border fortifications in this area deviated from the norm of an border wall (outer wall), a “no man’s land,” and a Hinterland wall (inner wall), having instead just an Hinterland wall and a “security fence.” No border wall to the west was built; the Spree itself assumed the function of the border strip and border wall, and border troops used patrol boats to guard this area. The stretch of the wall along the Friedrichshain riverbank, known today as the East Side Gallery, is part of the former Hinterland wall. Because of the riverbank’s topography and the area’s location along the “protocol route” taken by state visitors on their way from East Berlin’s Schönefeld Airport to its city center, the Hinterland wall here was constructed of “Grenzmauer 75” elements used elsewhere for the border wall.

To the immediate northwest of the East Side Gallery is an adjoining fragment of the Hinterland wall from the 1960s, which has also been given protected status. This section consists of a brick wall built before the actual Berlin Wall as part of a nearby industrial site. It was reinforced with hollow-block bricks to further secure the border. The proximity of this wall, which had been pieced together, and the smooth uniformity of the “Grenzmauer 75” put up here (where it later became the East Side Gallery) for representative purposes in the 1980s documents the GDR’s efforts to present the Wall as well-kept and orderly and to play down its significance, in a sense, wherever it faced west or was likely to attract notice in East Berlin.

The works created at the East Side Gallery in 1990 needed restoration already soon after they were painted: done on concrete without a coat of primer and with non-durable paint, they were damaged by rain, grime, and sun, among other things, while some were painted over with graffiti. There have since been successful model restorations of the pictures “Vaterland” (Fatherland) and “Sieben Stufen der Erleuchtung” (Seven steps to enlightenment) and the Wall segments they were painted on. In the summer of 2000, the Deutsches Lackinstitut, together with the Berlin painters’ guild, celebrated its 100th anniversary by financing the retouching of the pictures along a 300-meter section of the East Side Gallery’s northwest end. If this monument is to be preserved, the concrete itself will have to be restored and, afterwards, the pictures worth keeping repainted. In the future, funds from the “Mauerfond” (Wall fund) are to be used to help finance the restoration of both the Wall and its paintings to ensure their survival.

Plans now call for a riverbank park located between the Spree and the Wall. The East Side Gallery is to be integrated into the Spree Park as an “artistically transformed Wall monument” and this section of the Wall preserved both as a former barrier and with today’s paintings.