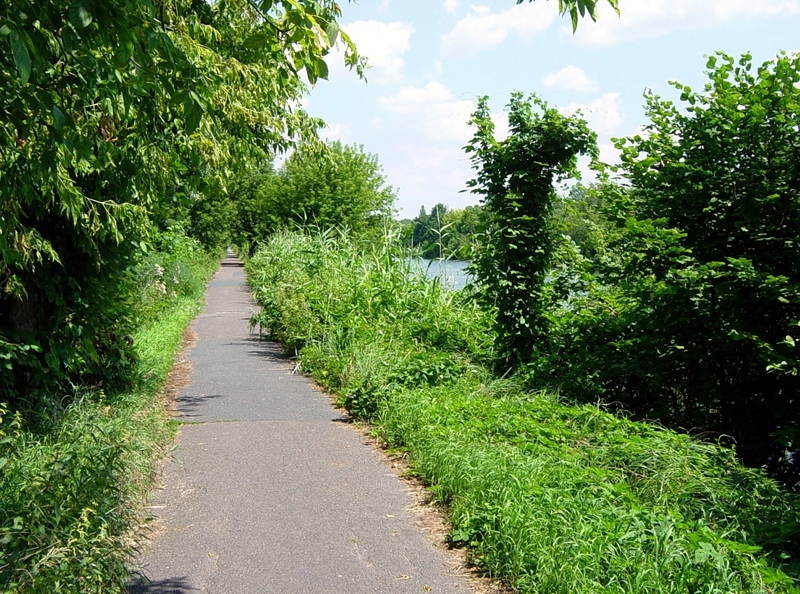 20 Green Walks in Berlin offer a diverse range of relaxing walks and hikes, green short-cuts for shoppers or daily routes for parents with baby buggies, fitness trails for joggers or longer excursions to explore the city and its environs – and most are set well away from road traffic. The 20 Green Walks in Berlin network uses Berlin’s green corridors to link neighbouring city districts and the nearest recreational areas.

Since 2004 the 20 Green Walks in Berlin project has been developed in cooperation with BUND Berlin e.V. and FUSS e.V. Berlin, two not-for-profit organisations, and the State of Berlin, represented by the Senate Department for Urban Development and the Environment. With the assistance of over 100 voluntary hikers in the “A Plan for 20 Green Walks in Berlin” project, it was possible to optimise the network of routes. Since 2010, the cooperation partners also include the not-for-profit Berliner Wanderverband e.V. hiking association, which looks after the new waymarkers and trail signage.

The names of the 20 Green Walks in Berlin are taken from the particular Berlin landscapes or the walks’ destinations. The individual walks are not only named, but also numbered from 1 to 20. These numbers identify the routes on the waymarkers and maps.

The tagged routes comprising the 20 Green Walks in Berlin network stretch around 565 km. In some sections improvements in routing would be preferable, but partly due to existing uses or ownership these can not be realized in a timely manner. Those planned routes are marked in the map.

The 20 Green Walks in Berlin are based on the “Berlin system of open spaces (Berliner Freiraumsystem)” in the city’s Landscape Programme including Nature Conservation. One objective of the Landscape Programme (Berliner Landschaftsprogramm) is to create a network of 20 Green Walks in Berlin to link residential areas with the many diverse leisure amenities in parks and recreational areas in the city and in the surrounding areas of the State of Brandenburg.

The initial marking of the 20 main green paths on site was carried out by the Kompetenzzentrum für Ingenieurbiologie e.V. (Competence Centre for Engineering Biology).

Since 2012, the Berliner Wanderverband e.V. has been responsible for marking the 20 green walks. Hiking clubs affiliated with the association take on the task of supervising all the marked trails and try to ensure continuous marking with orientation aids.

What you need to know about 20 Green Walks in Berlin

The green heart of Berlin is the Großer Tiergarten. The Spreeweg and the Nord-Süd-Weg form a green axis cross at its eastern edge. More information

20 green main paths invite you to stroll, take a relaxing stroll, run errands, go on a daily walk with the baby carriage, take part in health training or go on longer excursions in the metropolis and the surrounding area, largely without the annoyance and danger of car traffic. More information

In FIS-Broker, Berlin's central portal application for the research and presentation of geodata, the current courses of the 20 green main paths are displayed. More information

In FIS-Broker, Berlin's central portal application for the research and presentation of geodata, the current courses of the 20 green main paths are displayed. More information

The basis of the 20 main green routes is the open space system of the landscape programme including the species protection programme for Berlin. One of the aims is to offer attractive recreational opportunities with parks and local recreation areas. More information

Thanks to the commitment of many contributors, the project 20 green main roads has become a success story. Here are the most important stages in the development of the project. More information

Gallery of 20 Green Walks in Berlin