In 2015, the Paris Agreement set new standards for international climate action. Berlin itself is not a party to the agreement nor bound by this treaty, however, it uses the agreement made in Paris as a guideline for its future climate protection endeavours. Having embarked on a strategy to make Berlin climate-neutral by 2050, Berlin makes an important contribution to international, European and national climate mitigation and adaptation efforts.

Like other cities across the world, Berlin will be assuming a key role in the fight against climate change. Although cities and communities only cover two percent of the world’s land surface, they are home to 50 percent of the world’s population and are responsible for two thirds of the energy consumption and up to 70 percent of the global carbon dioxide emissions. At the same time, climate change is also making its presence felt in densely populated urban areas. Extreme weather events, like the heavy storms and rains of 2017, and extremely hot summers in 2018 and 2019 underscore the need for action, also in Berlin.

One important step towards protecting the planet is to develop and implement concepts and ideas for practical climate protection at the local level – this is however a very small step when looked at from a global perspective, unless we are able to scale up successful local initiatives and solutions to an international level, bundle forces and resources and thereby multiply their effect.

Berlin is very active in international co-operations and communal alliances worldwide and within the European Union that were formed in the 1990s to discuss and further develop joint climate protection strategies and promote sustainability strategies.

These international consortia of cities and communities serve to exchange expertise and know-how about local climate protection and sustainability strategies. They also represent local interests in international climate action diplomacy. Long before the Paris Agreement was signed in 2015, cities and communities across the globe in the above-mentioned alliances had already committed to specific and ambitious reduction goals, thereby setting important signals. In this capacity, they play an important role in improving the international, European and national framework conditions of local climate policies. 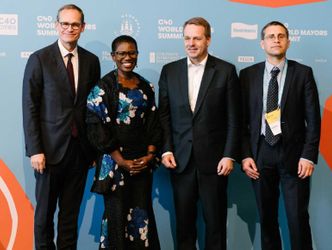 Since 2005, Berlin is a founding member of the C40 Cities Climate Leadership Group. The network consists of 94 large cities across the globe that work together towards ambitious climate action.

The C40 network is of high importance for Berlin, for instance, by enabling an intensive exchange of expertise in various C40 working groups such as the Waste to Resources Network, the Cool Cities Network and the Air Quality Network. Further, C40 supports the networking of political agents in various cities, in particular at the regular international C40 Mayors’ Summits. C40 also encourages its member cities to commit to ambitious climate protection goals. Thus, Berlin has signed three additional international declarations at the last C40 Mayors summit in Copenhagen: the Green and Healthy Streets Declaration, committing to the creation of a zero-emission-zone and fossil fuel free procurement of busses by 2030; as well as the Clean Air Declaration, further enhancing, regulating and reporting on air pollution; and the Deadline 2020 Declaration, committing to adjusting the climate policy of Berlin to the Paris Agreement.

The C40 Cities Finance Facility (CFF) is based in Berlin. This institution offers advice to cities in emerging economies and developing countries on how to finance climate protection projects. In November 2018, there was an international conference of the CFF in the City Hall.

Links:
collapse
Convenant of Mayors for Climate and Energy

More than 10.000 cities and communities have joined the Global Covenant of Mayors to date. On 4th September 2018 Berlin’s Senate passed a resolution to renew its commitments under the Covenant of Mayors and adjust them to the extended goals. This means that Berlin committed itself to the European Commission to reduce carbon dioxide emissions by at least 40 percent by 2030 and to increase climate resilience by adjusting to the impact of climate change. Concretely, cities that sign the covenant commit to developing and implementing numerous mitigation and adaptation measures to achieve these goals. This also includes developing an emission inventory and risk and vulnerability assessment. Within two years of joining, a Sustainable Energy and Climate Action Plan (SECAP) must be drafted and submitted to the Covenant of Mayors. Finally, every two years thereafter an implementation report needs to be submitted.

Berlin is also a member of ICLEI – Local Governments for Sustainability, an international alliance of localities that is committed to sustainable urban development.

This global network was formed in 1990 and brings together 1750 localities from over 100 countries. ICLEI supports cities to develop sustainability strategies and concrete solutions for climate action. For instance, ICLEI contributed to proposals for a sustainability profile for Berlin. ICLEI is also an important partner for cities in climate diplomacy at international conferences such as the yearly conference of the parties to the United Nations Framework Convention on Climate Change (COP).

The Climate Alliance (Klimabündnis e.V.) was founded in 1990 and is a network of European cities focusing on protecting the climate and indigenous peoples in the rain forest. Berlin is a founding member of the network.

Around 1700 communities from throughout Europe are members of the Climate Alliance and committed to continuously reducing their greenhouse gases. The goal is to reduce CO2 emissions by ten percent every five years. By doing this, members want to achieve the most important milestone of halving per capita emissions (base year 1990) by 2030 at the latest. In addition, all members want to achieve climate justice for indigenous peoples living in the rain forest by e.g. supporting climate protection measures, raising awareness and refusing to use tropical wood from forest depletion. The Climate Alliance office manages campaigns and projects, and also provides support to members when developing municipal energy and CO2 balance sheets.

Berlin also participates in the annual city cycling campaign of the Climate Alliance.

Eurocities was founded in 1986 with the aim to reinforce local governments influence in European decision-making processes and to raise transboundary cooperation between cities on an operational level.

Within Eurocities, Berlin is a member of the working group Air Quality, Climate Change and Energy Efficiency (WG AQCCEE). For more information on our engagement with Eurocities please see here.