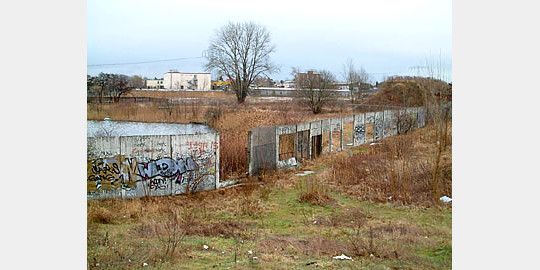 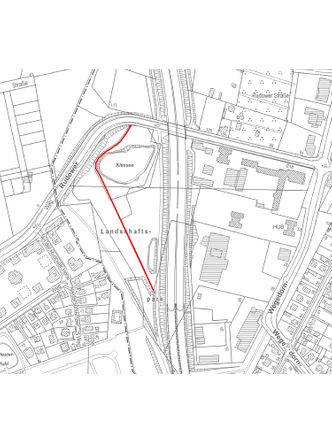 The Berlin Wall monument furthest to the south lies between Rudow and Altglienicke. North of Rudower Höhe – a 28-meter-high artificial hill created by the rubble of buildings destroyed in the war; also used as a garbage dump until 1958 – remains of the Hinterland wall (inner wall) can still be seen at their original location. This section of the Hinterland wall was part of the “third generation” introduced in the mid-1960s and consisting of concrete slabs between H-shaped reinforced concrete supports. Because of its location on the outskirts of the city, the border strip here was significantly wider than in the middle of Berlin, where there was less available space.

Large parts of the former border strip have already been cleared of Wall fragments, since the new A 113 expressway from Neukölln to Waltersdorf will run through this area. The remaining section of the Hinterland wall is a landmark in the midst of the spontaneous vegetation now proliferating in the former border strip. Now almost entirely covered by graffiti, the white paint characteristic of the Hinterland wall shows through in a few spots along the wall. Some concrete segments have already been removed, leaving gaping holes. A roughly 450-meter-long section of the Hinterland wall here was classified as a historical monument in 2001.