“SEASON of mists” is how John Keats described autumn in Rome in 1819. It was not mist but rays of multi-coloured artificial lights spraying prominent buildings that characterized Berlin in October 2007 when it celebrated the traditional Festival of Lights. A few days later New York City followed suit, albeit symbolically. Its lights were those of the first-ever “Berlin in Lights” cultural festival that ran from November 4 to 17. Spearheaded by the program at Carnegie Hall, related events – exhibitions, shows, lectures, concerts – spread their way into museums, cabarets and theatres throughout the city. It was as if Carnegie Hall (and by extension all of Manhattan) were reforging the link to the performing arts in Berlin that had marked the concert hall’s beginning in the late nineteenth century.

For me this abundance of cultural events also spelt out a reconnection of another kind. It conjured a certain image of the city that I had left in January 1939 as a ten-year-old bound for England on a Kindertransport. This odyssey – this return to an almost forgotten place that had once been home – had already begun some 15 years ago on my first return trip. Until then other cities, the beloved London of my “English” girlhood and of frequent later sojourns, picturesque Santiago de Chile where I spent the post-war years with my parents and acquired a more Latin sensibility, and overwhelming New York where I eventually made my life, had been uppermost in my mind. Berlin receded as a place I hardly knew or perhaps did not want to remember. It took another two visits – a Berlin Opera program and a three-day stopover between other destinations – to bring back the city as a place where I had lived, had been born. Gradually, the sound of the S-Bahn passing by, the musty smell of an old staircase in an apartment building, the design on an old-fashioned Kachelofen, the yellow leaves falling in autumn around what was once our villa in Dahlem and the dread that had disturbed my sleep during the last years seeped into my awareness and brought the city as I had known it to life again. 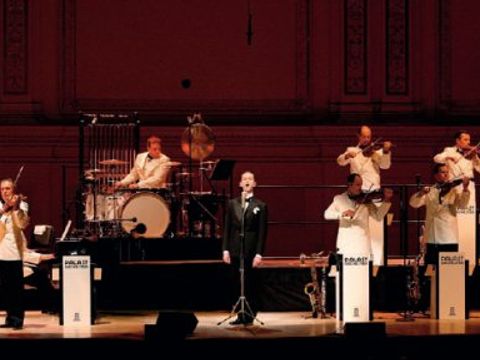 The “Berlin” program consisted of five parts: there were performances under the headings of BERLIN TALKS, BERLIN: THINK FORWARD, BERLIN: NO WALLS, BERLIN: KROSS KULTUR, and BERLIN: LOOK BACK. The performances that I chose fell under the last heading. They included the Max Raabe Orchester playing old melodies from the twenties and H.K. Gruber conducting Weill and Eisler. It was music dating more from my parents’ youth than from my own childhood. Now in retrospect, I ask myself why I chose these, and not other, offerings.

It seems to me that I am ever in search of a mythological city, the city that my mother – a journalist in the heady nineteen twenties – used to describe. It had always been her city, far more than mine. Child that I was in a different era, I had never experienced it in the way she or my father, who came there from Eschwege as a young lawyer, had done. So my choice of tickets stemmed from a growing sense of nostalgia for a barely known Berlin of culture and art that yet spelt out the warmth and family ties of my infancy at home and of later memories of my parents. Perhaps I did not want to remember the city as I came to know it by the time of Kristallnacht. But now, seventy years later and on a windy November evening, I could relish a connection with the past as I attended a performance of the 1928 film Berlin: Portrait of a City, and then walked down West 57th Street, past the gaily uniformed doorman at the Russian Tearoom, towards the lights of Fifth Avenue on a gusty November evening without sensing the cold gust of the past.

Even so, now some four months later I regret that I did not attend performances such as that of the Nomad Sound System, of the KNM (Kammerensemble Neue Musik) or of Turkish and Kurdish folk music. I am preparing to go on another trip to Berlin in the summer of 2008. This time as a former Kindertransportee, current memoir writer, and translator to the grain, I will be participating in a conference on the plight of refugees today. I will seize this chance to get to know more of Berlin’s Strassenkultur, ist cafes, its people and their lives now. I am all the more prepared to do so now that the old Berlin – the one I never really knew but for which I still yearn – is imbedded in so many aspects of New York cultural life. This summer in Berlin I will take as my motto the headings of the “Berlin in Lights” program that I missed, namely, BERLIN: THINK FORWARD, BERLIN: NO WALLS and BERLIN: KROSS KULTUR.